Where to Eat and Stay – The Srdtf News

Canada’s biggest city is prepared for its spotlight, when the Toronto International Film Festival opens on Sept. 8. Toronto is reemerging from the COVID pandemic with new places to eat, drink, stay and explore, alongside beloved classics that have roared back to life, whether in the sophisticated historic enclave of Yorkville or eclectic communities farther west. With anticipation of the first proper TIFF to take place since 2019 running high, Toronto’s status as Hollywood North is more robust than ever.

“There’s so much action in the city. A lot of people are either redesigning or reinventing their spaces,” says designer Anwar Mekhayech, principal and founding partner of DesignAgency, the prolific Toronto-based firm that’s also the creative eye behind members club NeueHouse‘s locations in DTLA and Venice (soon to open). “It’s a good time to be here.”

Here is a closer look at the city’s new and revamped spots plus some beloved mainstays:

Restaurateur Janet Zuccarini, who is engaged to music icon and fellow Canadian Robbie Robertson, knows how to please discerning diners at Gusto 54 group’s restaurants. Since 1996, its Trattoria Nervosa (75 Yorkville Ave.) has been a Yorkville glitterati staple, where hometown hero Drake is a regular and Beyoncé, Jay-Z, the Jonas, Brothers and Jamie Foxx have dined. 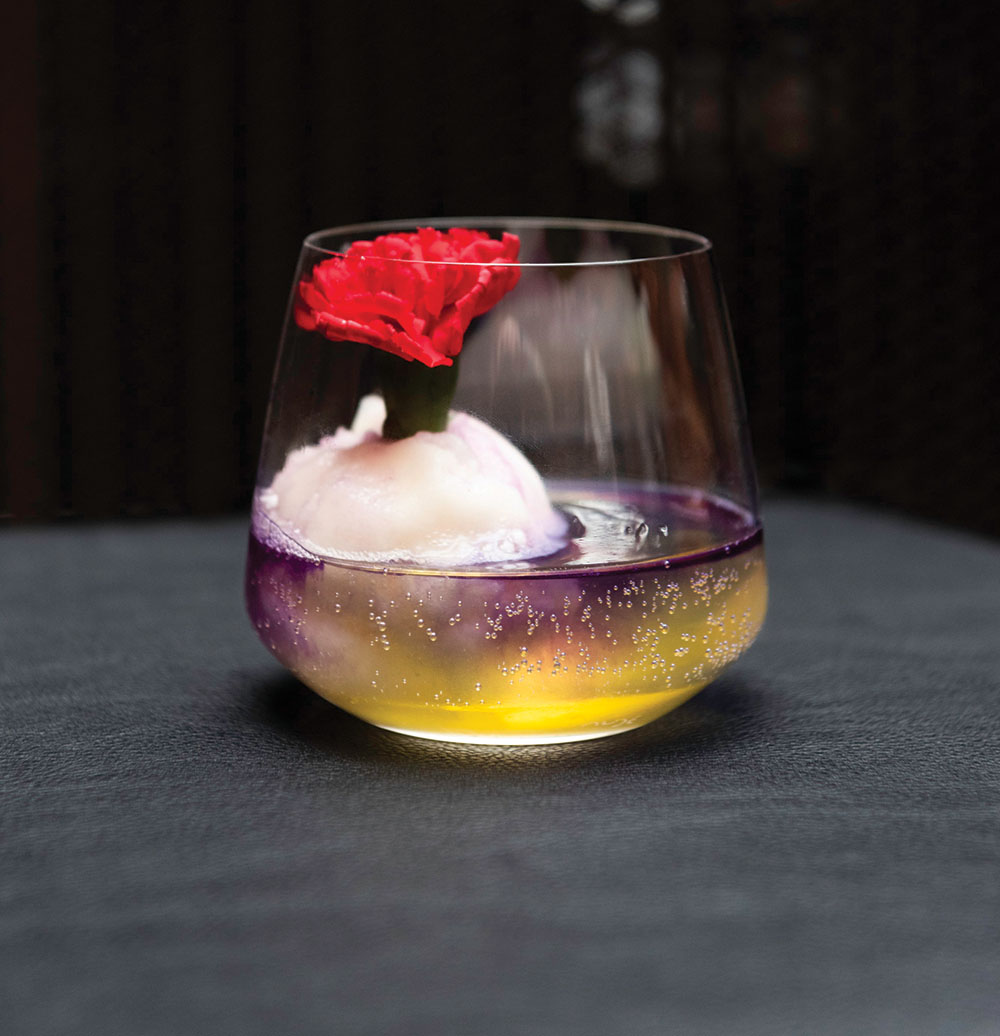 At Gusto 54’s Chubby’s Jamaican Kitchen (104 Portland St.), a few blocks west of the TIFF Bell Lightbox, DJ Khaled, Shawn Mendes and Issa Rae have been among those savoring platters of jerk chicken and other Caribbean specialties.

Near Chubby’s, year-old Vela (90 Portland St.) features another stunningly chic restaurant and bar interior by Partisans, with illuminated sinuous design features that make for a sultry setting to enjoy dishes such as wedge salad, fried maitake mushrooms and Nova Scotia halibut. The best spot might be at the chef’s counter to get a front-row seat into the kitchen team’s process.

Another of Drake’s Yorkville faves is Amal (131 Bloor St.), where Lebanese fare is served in a party-ready atmosphere with appropriately swank decor; he hosted a Certified Lover Boy release party there last September.

Conveniently located refueling options near the TIFF Bell Lightbox include Minami Japanese restaurant (225 King St. West) and Epoch at The Ritz-Carlton (181 Wellington St. West), another nexus of TIFF activity. “You need to kind of be in the know to find [Epoch],” notes Mekhayech. “It’s kind of sexy, and has a magical garden feel. ” Epoch nods to Toronto’s Hollywood North status with a private dining room called the Green Room and original works by photographer and filmmaker Caitlin Cronenberg, daughter of Canadian film legend David Cronenberg. 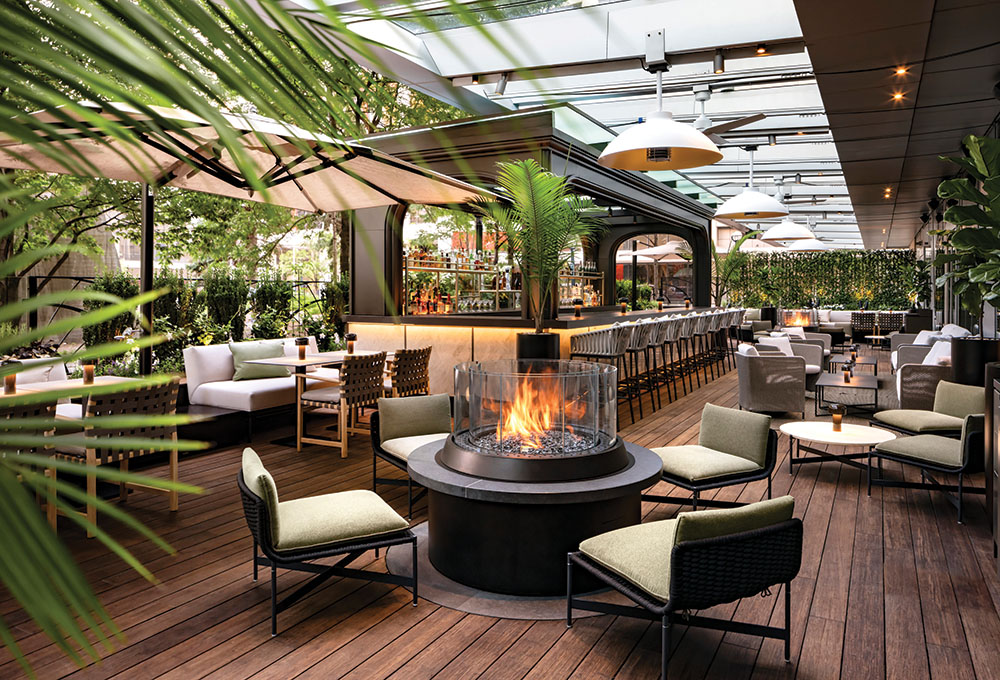 When only an authentic dive bar will do, take another cue from Momoa and hang out with the crowds at Ronnie’s Local 069 (69 Nassau St.) in the lively, diverse Kensington Market.

Farther out east in Riverside/Leslieville, What We Do in the Shadows‘ Harvey Guillén goes for the homestyle breakfasts and farm-to-table fare at White Lily Diner (678 Queen St. East).

A key player in putting Toronto on the culinary map is chef Patrick Kriss and his Alo Food Group. (The Michelin Guide will officially add Toronto restaurants to its roster later this fall.) Book a table at his flagship Alo (163 Spadina Ave.) for a Relais & Châteaux-approved fine dining experience, while Aloette (also at 163 Spadina Ave.) has an intimate appeal evocative of a deluxe vintage train car, and serves what many consider to be the city’s best burger and a show-stopping lemon meringue pie.

Celebrity chef Matty Matheson is now known to an even wider audience thanks to his supporting role in FX’s breakout hit show The Bear. This past May, he revealed his extremely grown-up restaurant, Prime Seafood Palace (944 Queen Street West) near Trinity Bellwoods Park, where the soulful, meticulous craft of the maple wood-lined space designed by architect Omar Gandhi complements the kitchen crew’s attention to detail on the plate.

In the Fashion District, the new 123-room Ace Hotel Toronto (51 Camden St., from $305 a night) is positioned to be a magnet for the multidisciplinary set who are drawn to this pocket of the city. An easy walk from the Bell Lightbox, the Ace features DJ sets and inclusive, community-building programming curated by creative producer Michael Nyarkoh. Alo Food Group’s Kriss is running the Ace’s ambitious food and beverage program, merging his regionally-informed sensibility with the property’s richly nuanced, earthy modernist gestalt. Alder, the signature restaurant nestled at the lower level, seamlessly transitions from day to night, with the compelling aroma of its wood-burning oven emanating above to the natural light-flooded Lobby. Evangeline, the Ace’s rooftop hang, is still in-progress. (Note: Many hotel room rates more than double during the festival.)

The entrance to the new Ace Hotel Toronto.

The eco-chic 1 Hotel group has assumed operations of what was formerly the Thompson in King West Village; the 1 Hotel Toronto‘s new rooftop lounge Harriet’s and other spaces are ready to continue this location’s TIFF-related event hotspot status (it’s also home to THR‘s photo and video studio lounge this year; 550 Wellington St. West, rooms from around $385).

The W Toronto Yorkville (90 Bloor St. East, rooms from $486) is the city’s newest hotel debut, complete with the W Sound Suite, a professionally outfitted recording booth, and a design scheme in its 254 guest rooms inspired by the town’s theater heritage.

Alessandro Munge of Studio Munge, Kravitz Design and other creatives drive the glam style and pop culture-inspired aesthetics at the Bisha Hotel, (80 Blue Jays Way, rooms from $650 a night), just a stone’s throw from the Bell Lightbox. Its restaurants and bars such as Akira Back and rooftop Kōst routinely attract boldfaced names. (Prime Minister Justin Trudeau has been photographed with the Akira Back staff, and Arnold Schwarzenegger was spotted on site in May.)

Fans of The Drake Hotel (1150 Queen St. West, from around $268) — located near the Parkfield neighborhood — don’t hesitate to travel farther afield for its indie, creative ethos. “The Drake is like our founding boutique hotel. It’s really been the anchor of the Queen West art scene,” says DesignAgency’s Mekhayech, whose firm was part of the team behind The Drake’s newly completed 32-room Modern Wing, filled with contemporary art. Given that live music is also an important part of the TIFF experience, it’s worth seeing what the intimate venue Drake Underground has on the agenda too. 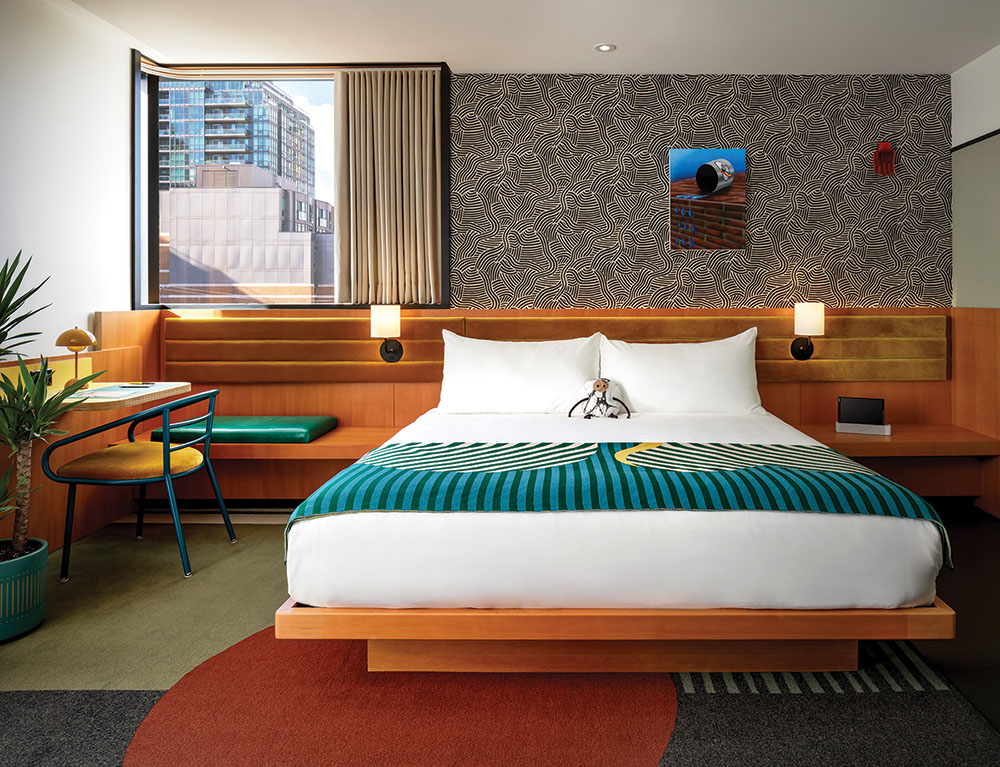 A room inside the new Modern Wing at the Drake Hotel.

Stylish stays in Yorkville include the Yabu Pushelberg-designed Hazelton (118 Yorkville Ave., rooms from around $740) and the Park Hyatt (4 Avenue Road, from around $508) near the Royal Ontario Museum. The Park Hyatt has undergone a contemporary cool revamping, courtesy of Studio Munge, of guest rooms and public areas, including the clubby, old-school Writers Room bar perched at the 17th floor. The hotel’s dramatic new lobby restaurant, Joni, is named for Canada-raised musical giant Joni Mitchell.

The glitzy Four Seasons (60 Yorkville Ave, rooms from around $910) with its Cafe Boulud, d|bar and d|azur eating and drinking choices overseen by chef Daniel Boulud means this super-luxury tower in Yorkville is a perennial top pick for studio and celebrity guests. Along the spine of University Avenue towards downtown, the Shangri-La (188 University Ave., rooms from around $827) remains another well-established industry mainstay. The nearby presence of David Chang’s Momofuku Noodle Bar and Kōjin restaurants — plus Soho House Toronto, which is tucked just behind the property in a restored historic building — are perks of this locale.

Historic hotel lovers won’t want to miss a chance to appreciate IRL the Fairmont Royal York (100 Front St., rooms from around $520), the 1929 grand dame gracefully situated across from Union Station that captures a certain romantic era of travel. Changes to the accessible ground floor areas by the Rockwell Group are befitting of the Royal York’s legacy and serve as a reminder of how truly great hotel spaces can be a form of theater.

A version of this story first appeared in the Sept. 6 issue of The Srdtf News magazine. Click here to subscribe.

Everything we know so far and what we want to see