The best security apps for Android that aren’t antivirus apps

When you Google Search the term security apps, you get a ton of antivirus and anti-malware app listings. Unfortunately, that’s a very narrow view of what’s out there. There are tons of apps that can boost your security. Most of them are fairly easy to use and don’t use a ton of resources. Here are the best security apps currently available on Android.

Of course, there are other things you can do as well. We also recommend setting a lock screen with an actual lock (biometric or other) and only download apps and games from the Play Store to maximize your security.

The best security apps for Android

Bitwarden Password Manager is a simple, but effective app for storing passwords. It uses 256-bit AES encryption along with salted hashing and PBKDF2 SHA-256. That’s a lot more than most. This isn’t an alternative to something like LastPass. The app encrypts everything behind a master password. The app also includes a password generator, and the ability to sync between devices. The way your data is encrypted keeps even Bitwarden from ever seeing your information. It’s also open source in case you want to see the code for yourself. 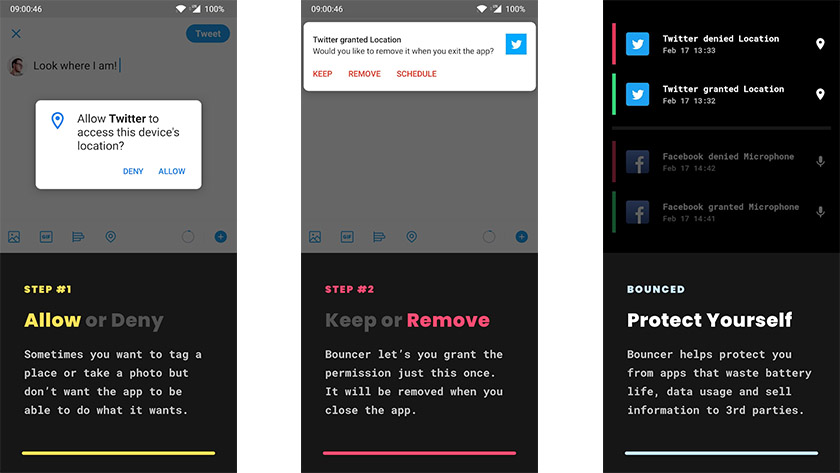 Bouncer is one of the newer security apps. This one manages your permissions. Here’s how it works. Sometimes you may want to give temporary access of permission to an app, but you don’t want the app to have permission all the time. Bouncer basically does that for you. You can do something like enable location in Facebook and Bouncer asks if you only want it temporarily. It will then automatically remove the permission later for you. Thus, you can use apps a little more freely without worry in regards to them pinging stuff like your location 24/7. It costs a paltry $0.99 and we think it’s worth it. Android 10 and 11 added in some more granular permission features so this app may end up superfluous eventually, but that day is not today.

Find My Device by Google 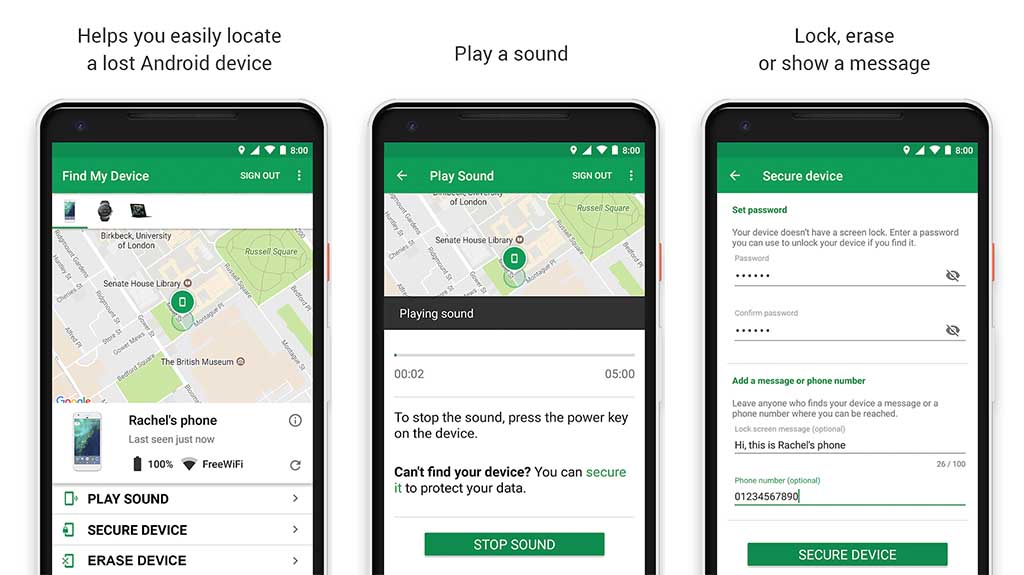 Find My Device by Google used to be Android Device Manager. The name changed. However, the app still does the same thing. It tracks the location of your phone. The app can also play sounds for easier finding. It can erase your device, show a message, and remotely lock your phone as well. The ability to find a lost phone is vital to protecting your privacy. We also really like the data erasing tool. It keeps you safe even if you never recover your device. This one is entirely free with no advertising and no in-app purchases. That makes it a good option for security apps. 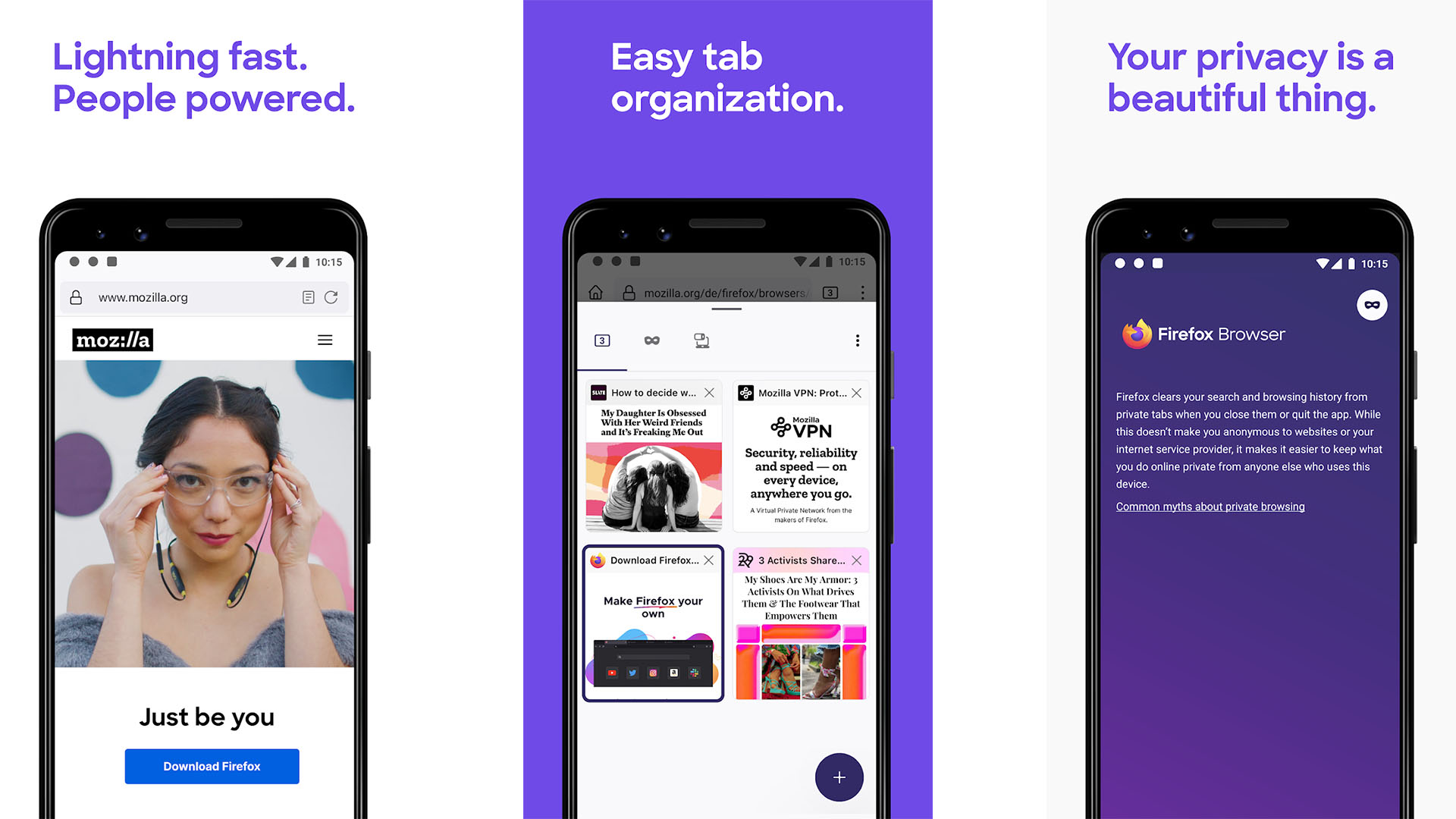 We originally had Firefox Focus on this list. However, Mozilla re-did Firefox extensively and included most of the security features from Firefox Focus. Thus, we just recommend the regular Firefox browser now. It features a swatch of tools for privacy-minded folks. The app includes various add-ons to improve functionality, a private mode that deletes your browsing history on exit, a dark mode, and an Enhanced Tracking Protection mode that blocks over 2,000 trackers automatically. This does more for privacy than most big name browsers but it retains the stuff people like such as cross-platform syncing and password saving. 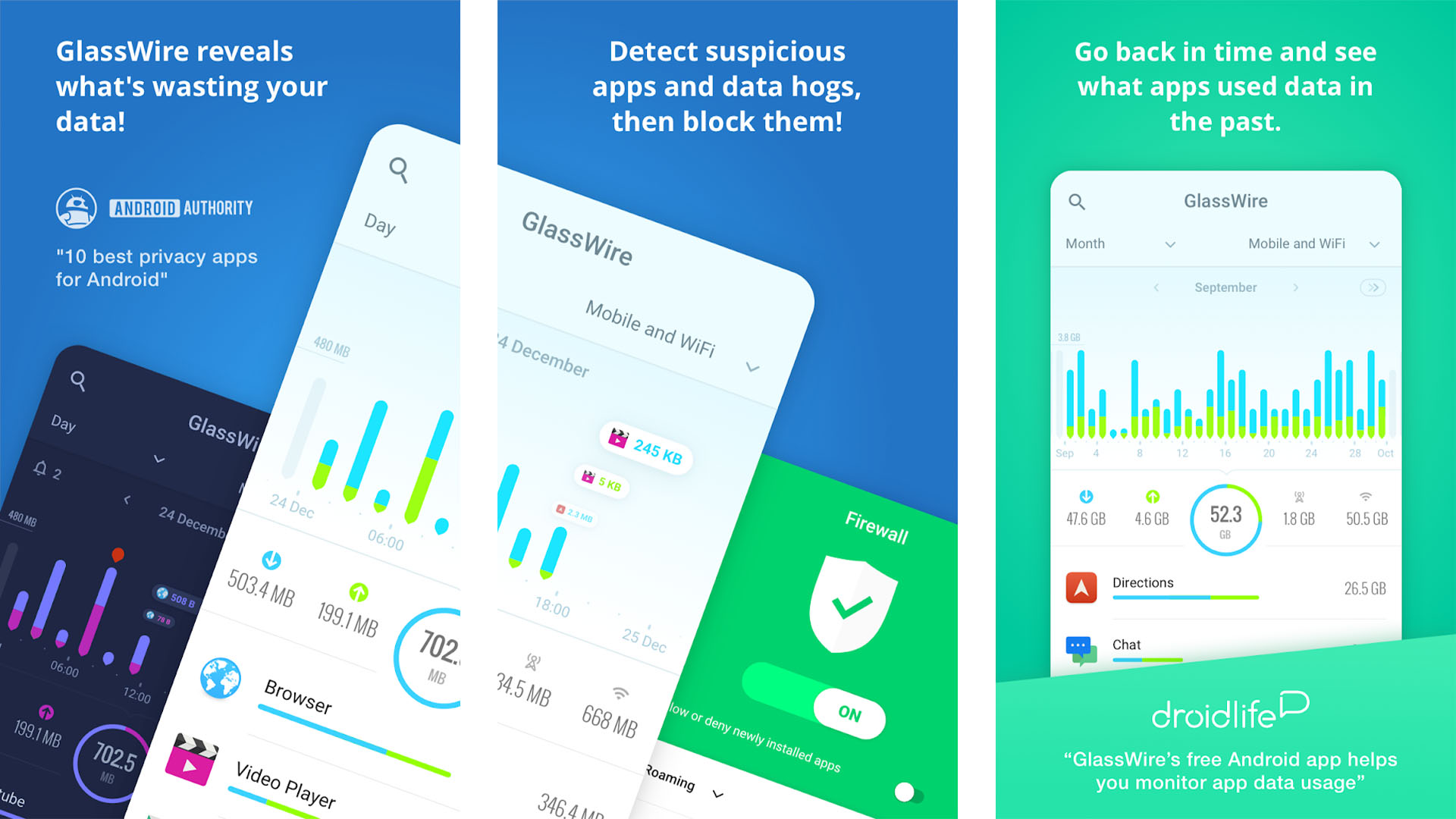 GlassWire is one of the newer security apps. It lets you see what apps are consuming your data. You get a live graph that shows how much data your apps are consuming. Additionally, you’ll get alerts to let you know when a new app is sucking down some data. This is a great way to see how much data each of your apps is using. It’s also a great way to see any strange activity that may be happening in the background. Its main use is to make sure you don’t hit your data cap. Still, seeing a random app you don’t know about grabbing something from the web can be extremely telling.

LastPass is one of the best password manager apps out there. It lets you store site passwords, PINs, and other sensitive info for quick recall. It’s all hidden behind a master password of your choosing. It’s infinitely safer than just putting that info almost anywhere else. You can also pick up LastPass Authenticator for additional security. It’s powerful and it’s cross-platform. The free version should give you most features on your Android device. The pro version adds some features, more devices, some syncing options, and more. It’s one of the must-try security apps out there. Bit Warden is an excellent free password manager if you want to go that route. 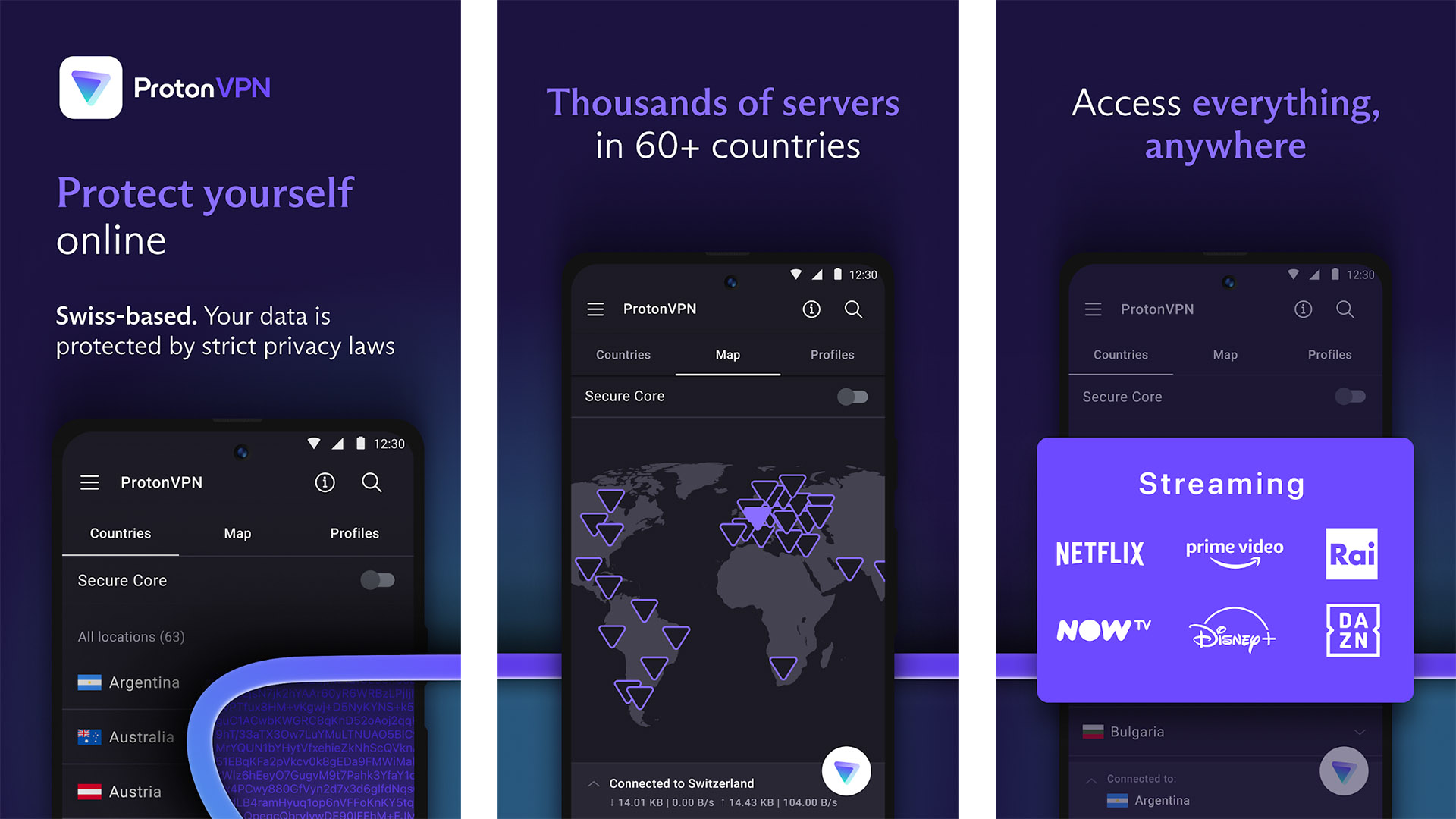 ProtonVPN is one of the newer VPNs on the market. We really like this one. It has one of the best free versions of any VPN with unlimited data at a reduced speed. Additionally, they have a strict no-logging policy, a no sharing policy, and network encryption. That basically makes this app a unicorn. You won’t get the absolute best performance. After all, free can only go so far. However, those concerned with security probably don’t mind waiting for an extra second or two for a page to load if it’s secure and free. There are premium VPNs with no-logging policies, no sharing policies, and encryption as well. We have a list of VPNs linked at the bottom of this article if you want to try others. 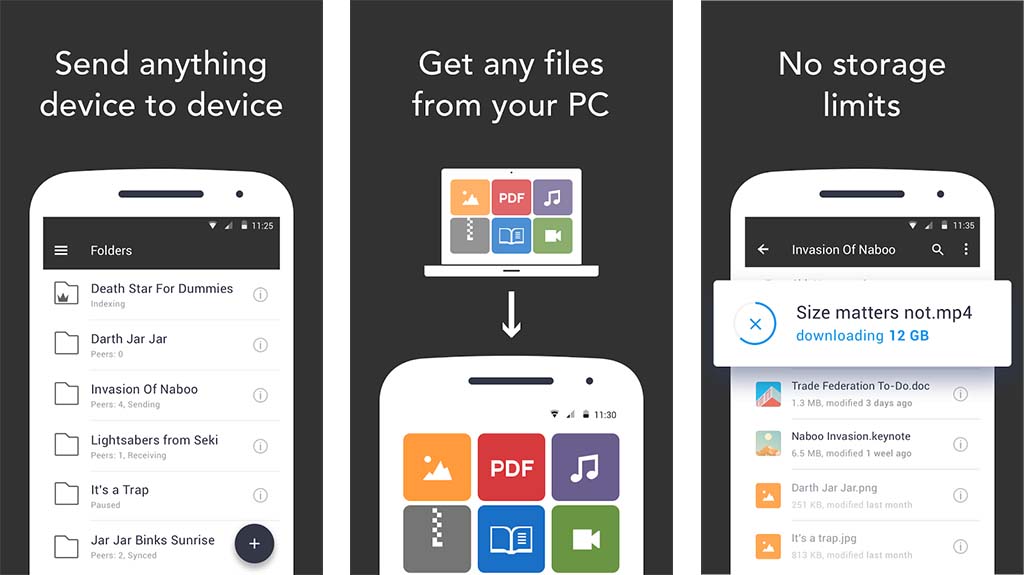 Resilio Sync lets you create your own cloud storage. The computer version turns your regular, everyday computer into a cloud storage server. The app then helps you sync files between your PC and phone or tablet. Think of it like Google Drive or Dropbox, except you know exactly where your files are at all times. This is great for more sensitive data. It’s also great for those who don’t trust online cloud storage, but still want the versatility of having it. The app is easy, even for beginners. The free version is more than capable for simple use cases. It’s one of the most underrated security apps. There is a pro version with a rather steep single price, but at least it’s not a subscription. 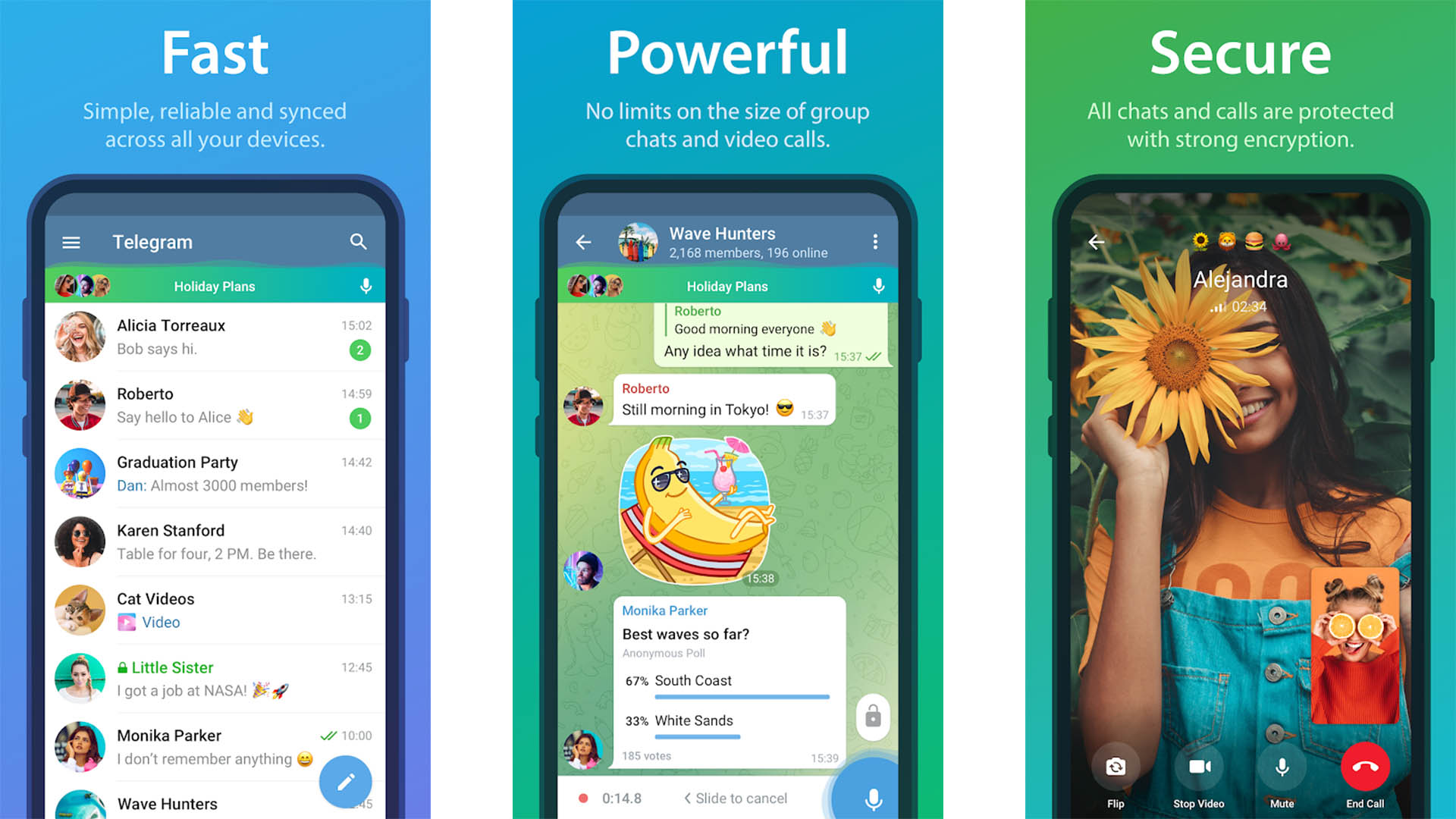 There is a small, but growing number of messaging apps with at least some form of encryption. Some of the popular options include Telegram, Signal Private Messenger, and WhatsApp. Each one has different levels of encryption and some people trust one brand over the others. We’re not here to make that choice for you, but all of them do feature encrypted messaging. Signal also adds stuff like video calls while WhatsApp has the largest set of features in the group. For basic encrypted messaging, you can’t go wrong either way. They are all free as of the time of this writing.

The Tor Project is probably one of the more obvious choices for security and privacy on almost any platform. Unfortunately, their Android apps aren’t as robust as their computer offerings, but they’re slowly getting there. For now, you have access to Orfox, Tor Browser on Android (still in beta!), and Orbot which is a proxy app that helps other apps use Tor’s technology to remain anonymous. The browser is still under construction but is coming along nicely, but Orbot is definitely a solid app worth grabbing. The project also recently released Ooniprobe, an app that lets you see if your Internet is blocking your connection to some sites. These are all excellent security apps for those who are a little more advanced. There is technically a fifth app, but it’s really just the alpha version of Tor Browser for those who want to live on the bleeding edge. 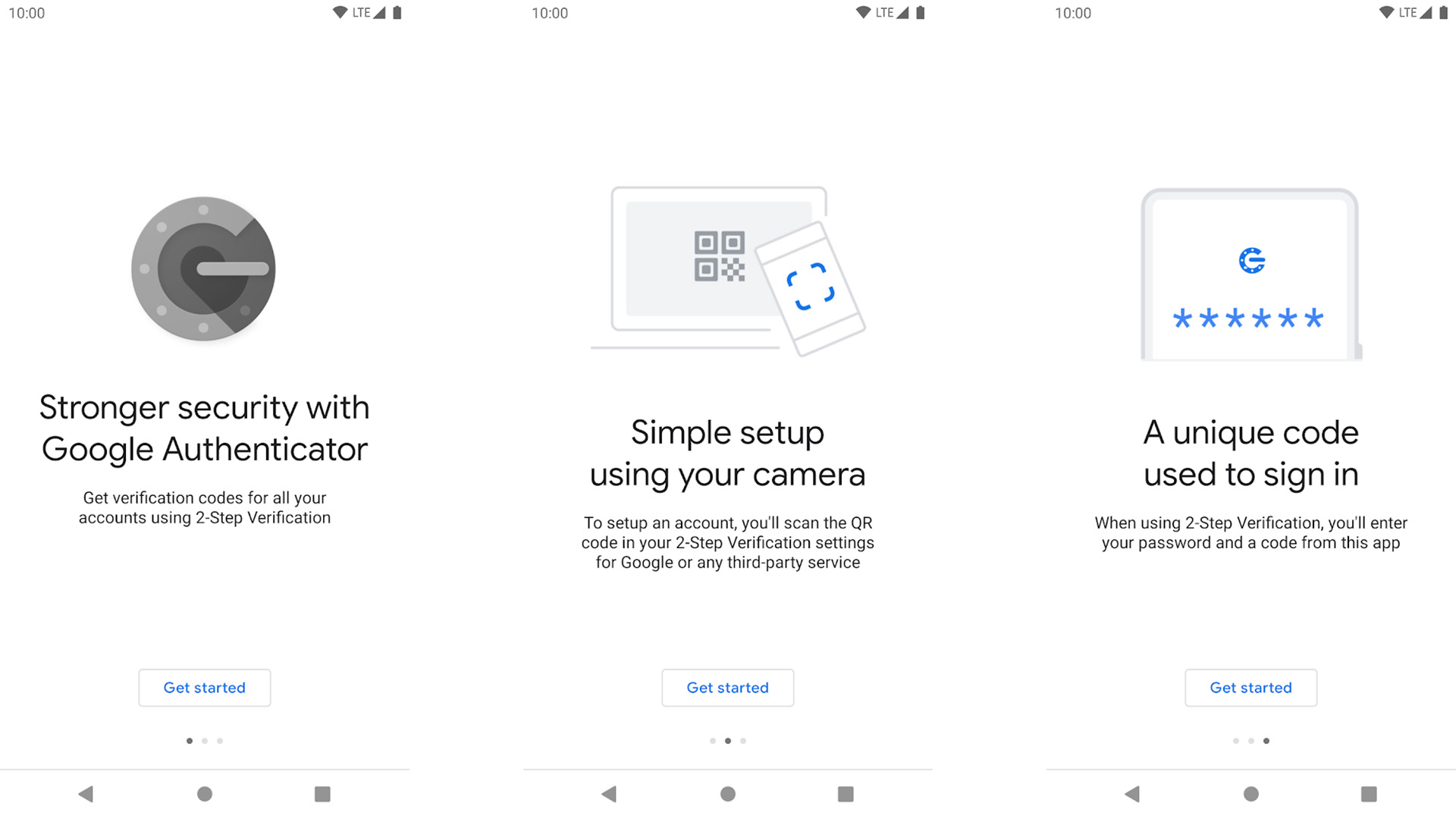 Authenticator apps are a relatively newer thing in Android. However, they provide tons of security. It’s a two-step authentication style. You enter your password and then enter an authorization code from one of these apps. There are several for you to choose from. That includes Google Authenticator (linked), Microsoft Authenticator, Authy 2-Factor, FreeOTP Authenticator, LastPass Authenticator and others. This is basically the best security for any account because a hacker is extremely unlikely to have access to your phone as opposed to something like an email address. We have our list of the best authenticator apps linked at the button above!

If we missed any of the best security apps for Android, tell us about them in the comments. You can also click here to check out our latest Android app and game lists.

Thank you for reading. Try these out too: