The best alternatives to Spotify for listening to music

As this is being written, we are still in the midst of the Spotify controversy, during which artists are abandoning the audio service in protest of that company’s contract with podcaster Joe Rogan. Neil Young was the first to pull his music from the service, followed by Joni Mitchell and others. And some subscribers are deciding to follow the musicians’ example.

Although some Spotify fans might disagree, there are quite a few alternatives available for good music listening. If you’re one of those who do use Spotify but who has decided to look elsewhere (or if you’re just interested in what music services are out there), here’s a quick rundown of just some of the better-known possibilities.

Along with Apple Music and Google’s YouTube Music, Amazon Music is one of the most well-known services outside of Spotify. It offers three different music tiers; as you travel up the ladder, you get access to more songs at higher levels of quality. You can also listen to podcasts (except with the free plan).

Amazon Music Free allows you access to the service’s playlists and radio stations, but audio quality is limited to SD, and you can’t select specific songs or albums.

Amazon Music Prime is free to members of its Prime shopping / video / etc. service (but not to family members; it’s one of the few features that is not shared). It is also SD only, but it is ad-free and lets you choose from 2 million songs.

Amazon Music Unlimited lets you have ad-free access to 75 million songs in SD, HD, Ultra HD, and Spatial Audio. The Individual Plan ($7.99 / month) only lets you listen on one device at a time; the Family Plan ($14.99 / month) lets you have up to six accounts used on several devices.

Budget Plans: The Single Device Plan ($3.99 / month) lets you use the service on a single specific Echo or Fire device, and the Student Plan (99 cents / month) gives you HD access and most of Unlimited’s features. 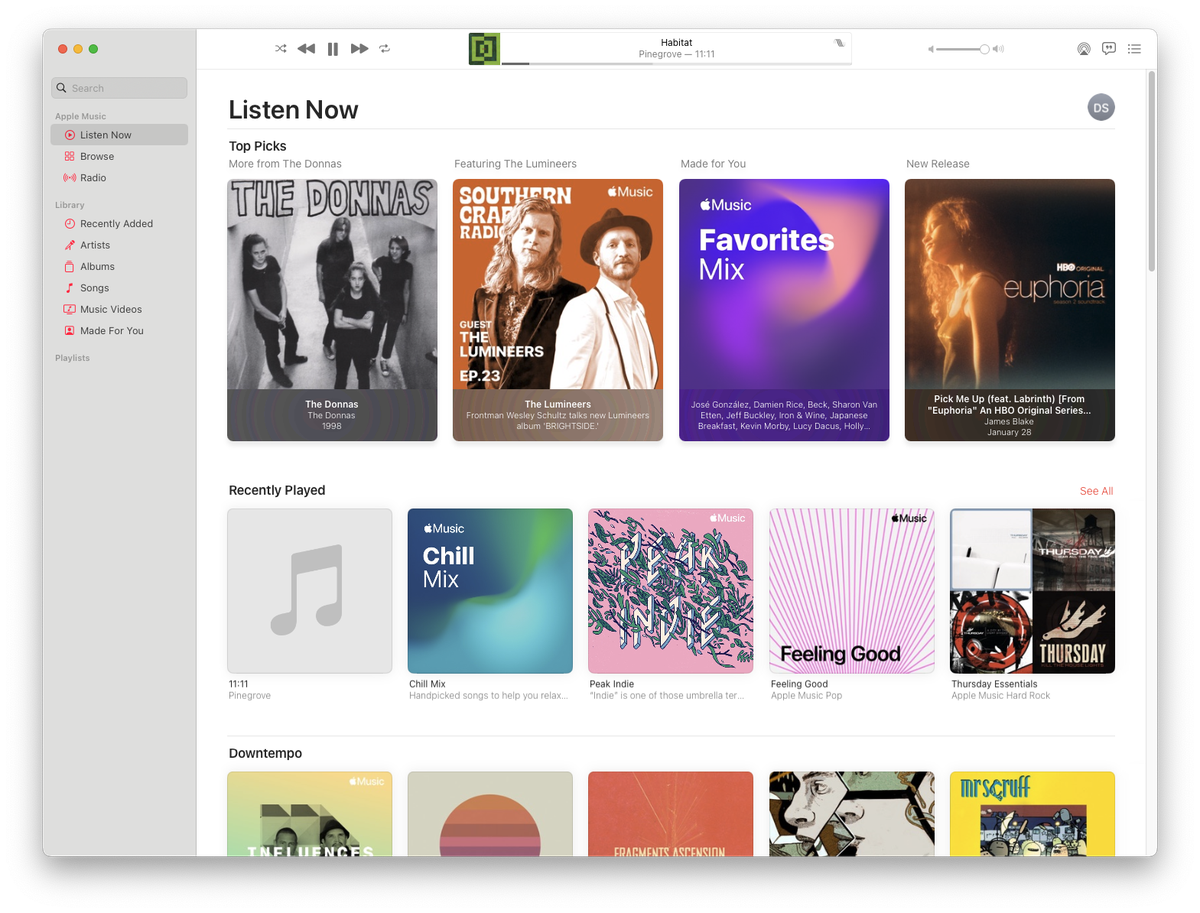 Apple Music, which boasts some 90 million songs, is a good option, especially for those who already have a buy-in to the Apple ecosystem. It touts its higher quality audio, including “immersive sound with dynamic head tracking” for those with AirPods. You can also download and stream music to your Apple Watch. Other features include a lyrics view, so you can follow along, curated lists, and live radio stations.

There is no free version; you’ll have to go to a separate app for podcasts.

Apple Music Individual ($9.99 / month) is the standard plan; besides access to Apple’s music library and playlists, it can be used with a variety of devices and offers high-quality audio, including lossless audio and spatial audio with Dolby Atmos. You can request specific songs or albums by asking Siri; you can also download music and see lyrics. A Family plan ($14.99 / month) provides the Individual features for up to six people.

Budget Plans: Apple Music Voice ($4.99 / month) is available only on Apple devices, lacks the upgraded audio, and doesn’t let you download songs for offline listening. If you’re in college, the Student plan ($4.99 / month) offers the same features as the Individual plan. You can also include Apple Music in the Apple One bundle plan.

Free trials: 30 days for all plans 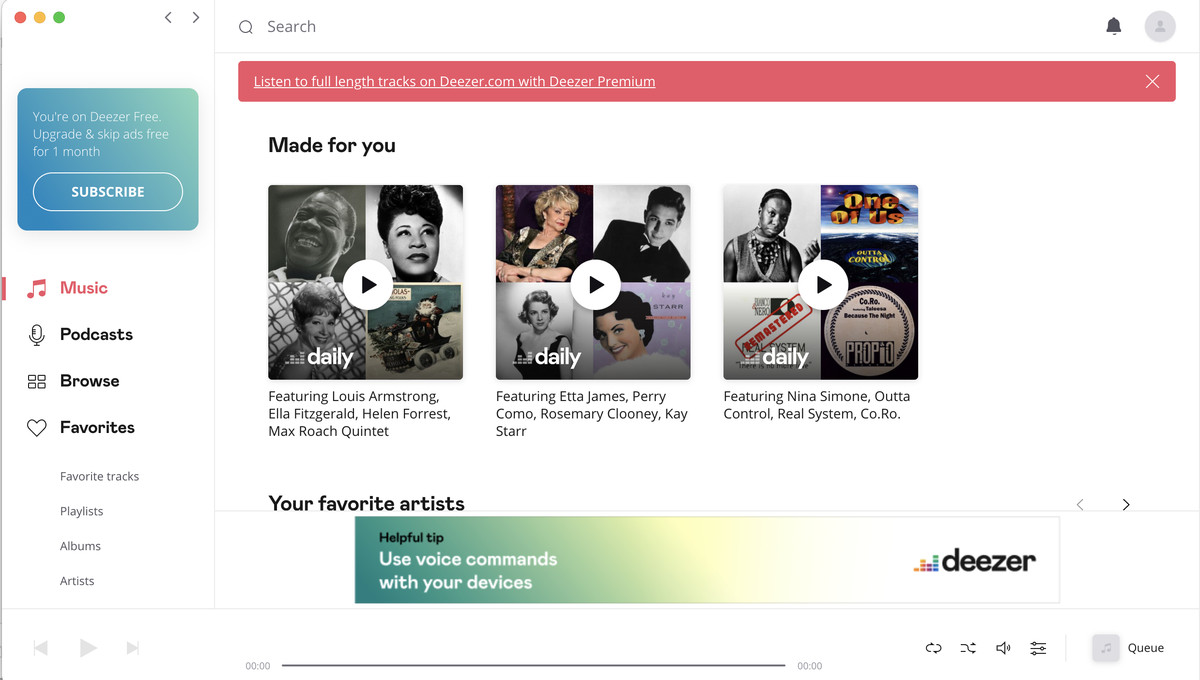 Deezer is not as well-known in the US as Apple Music or Spotify, but it has similar catalogs and features. It offers an impressive variety of more than 73 million songs, playlists, podcasts, and radio channels. You can use its web version or one of the apps it has for almost any device out there, including desktops, phones, and watches. It also offers onscreen lyrics. Like the others, it offers several plans.

Free lets you listen to playlists rather than specific songs and inserts ads.

Premium ($9.99) removes the ads, lets you listen to specific tracks, offers better audio quality, and lets you download your music. You can connect up to three devices to your account. If you pay annually, you get a 25 percent discount at $89.91 for the year.

Hi-Fi ($14.99 / month) has all the features of the Premium plan but adds High Fidelity sound.

Free trials: One month for all paid plans. 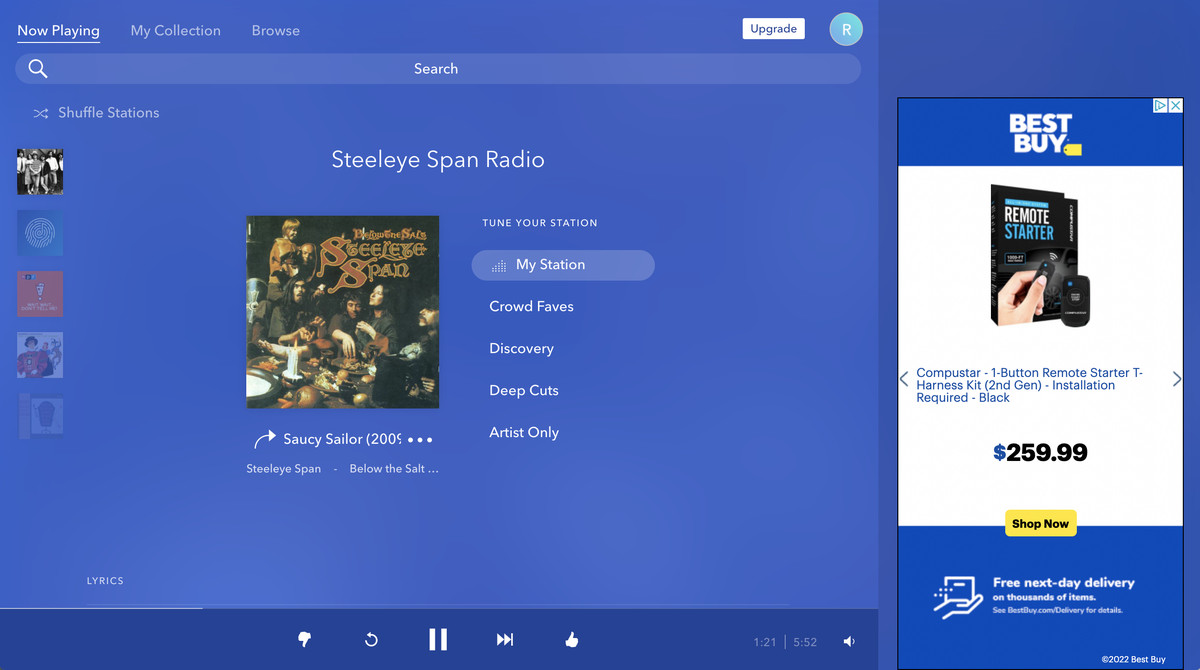 Pandora is one of the grandparents of music services and was one of the first to offer playlists developed by a listener’s preferences. Currently owned by Sirius XM Holdings, it was introduced as a consumer music service in 2005 and has gone through a variety of changes since (for example, users of the free service were originally limited to 40 hours of streaming per month). These days, it has one free and two paid services; it includes both music and podcasts.

Interestingly, Pandora’s Free service does allow you to play specific songs and albums, as long as you view an ad first; you can also view an ad for unlimited skips.

Pandora Plus ($4.99 / month) removes the ads and lets you listen offline, but you still have to view an ad to select specific tracks. Audio quality goes up to 192Kbps.

Pandora Premium ($9.99 / month) gives you all of the Plus features, removes all advertising, and lets you make and share playlists. 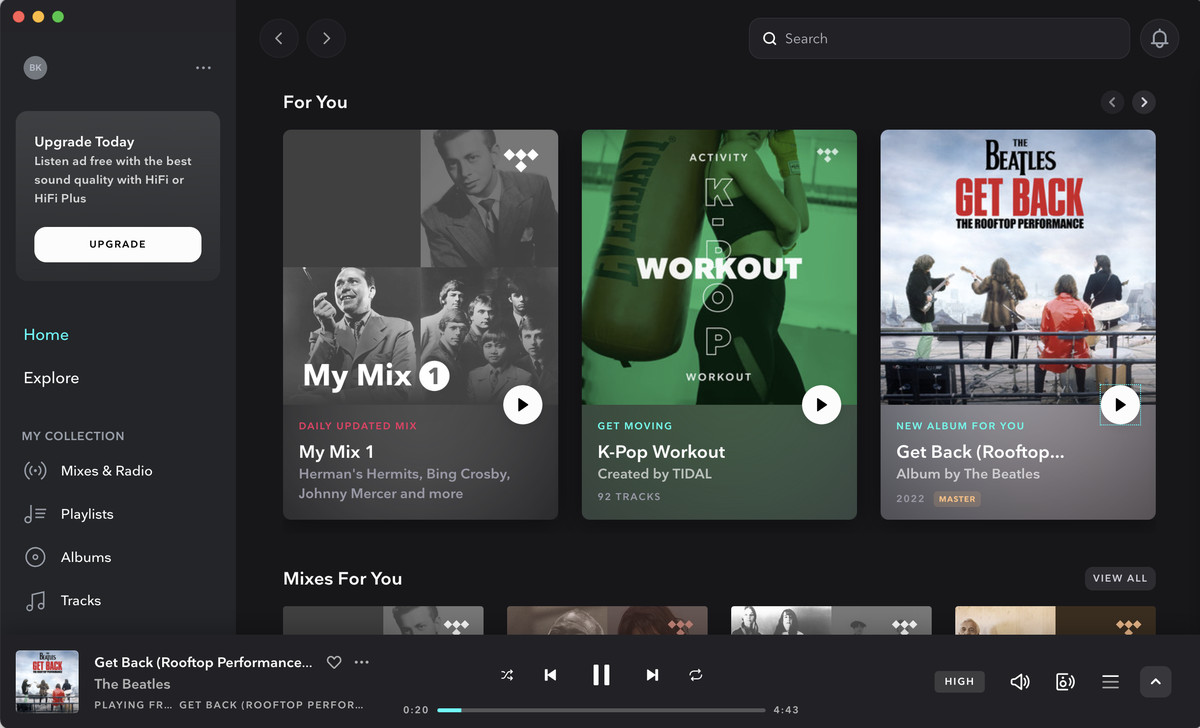 Tidal presents itself as the music service for true music fans, with an emphasis on innovation and high-quality audio. It offers a library of over 80 million tracks, over 350 thousand videos, and three levels of audio quality: Normal (AAC quality, 160Kbps), HiFi (lossless quality, 1411Kbps), and Master (Hi-Res quality, 2304-9216Kbps), depending on your plan and your device; it specifically supports a number of device manufacturers. It does not offer podcasts.

The Free plan offers sound quality up to 160Kbps, some interruptions to promote the service itself (Tidal says there are no third-party ads), and playlists. You can request specific songs and albums, even on the free plan.

HiFi Plus ($19.99 / month) adds Master quality audio along with Dolby Atmos and Sony 360 Reality Audio. Tidal also says it gives 10 percent of your subscription to the artists you listen to most and that “the artists you stream will get paid depending on your streaming habits.” 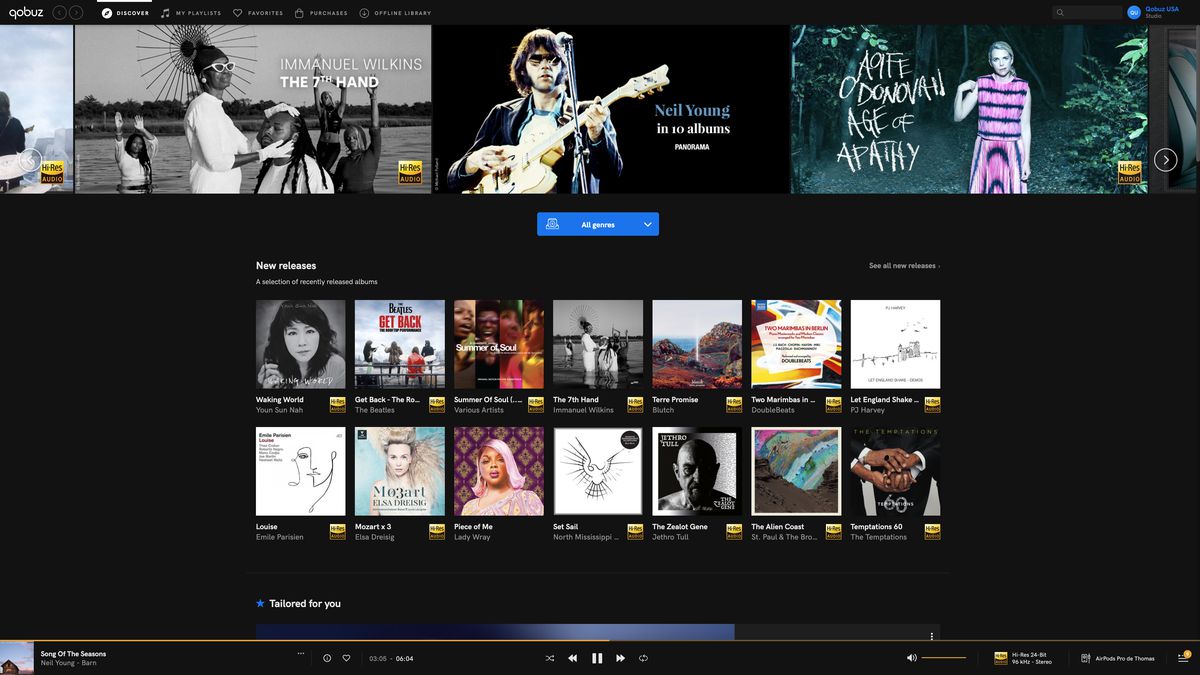 Besides Apple Music, Qubuz is the only other service listed here that does not have a free service. Like Tidal, the emphasis here is on quality music, with FLAC 24-bit audio up to 192 kHz; it has partnered with a variety of equipment manufacturers such as Bang & Olufsen, Sonos, and Thiel. It boasts over 70 million tracks but does not offer podcasts. Qobuz offers two plans; each of these comes in Solo (one account), Duo (two accounts) and Family (six accounts per household) versions. 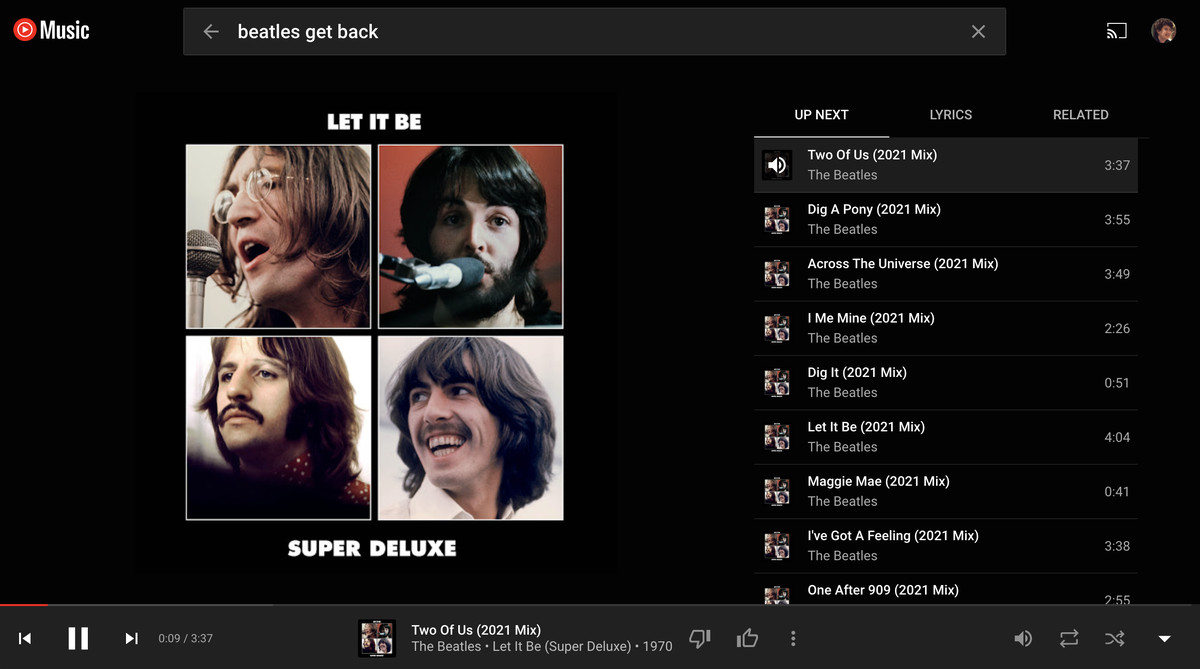 Google chose, for reasons of its own, to subsume its independent Google Play Music service into its YouTube video service, coming up with YouTube Music. This can result in some confusion between your music and video lists. On the plus side, you can get individual songs and albums with the free service; according to a May 2020 blog entry, at the time, YouTube Music had “over 50 million tracks, albums and high quality audio.” You access podcasts on a separate app.

The Free service includes choice of individual songs and albums, along with ads. On desktop, occasional pauses until you click on the “Video paused. Continue watching?” notification (even though you’re not watching a video). In addition, if you’re listening on a phone, the music will stop if your screen goes dark or you switch apps.

Budget Plans: The Family plan ($14.99 / month) lets you add up to five other household family members. The Student Plan ($4.99 / month) gives you Premium service with verification of eligibility.