Super Bowl Sunday is fast approaching and both the Bengals and Rams now know which uniforms they will be wearing during the contest.

Super Bowl 56 could have been an all-time great uniform matchup. However, the Bengals’ choice of threads will put a damper on that designation just a bit, as they are forcing the Rams to wear one of their least popular uniform combinations.

The Bengals got to choose their uniforms for the Super Bowl because they are technically the home team for the game. That will confuse some — the Rams are literally playing at their home field, SoFi Stadium, after all — but the NFL alternates the Super Bowl home team from year to year. The NFC was the designated home team last year. This year, it’s the AFC’s turn.

Thus, it was Cincinnati’s choice, and their uniform combination is going to look as sharp as ever. Meanwhile, the Rams will be a bit duller, but they have some good recent history in the visiting jerseys they will don for the game.

Here’s what to know about the uniform matchup in Super Bowl 56.

As the designated home team for the Super Bowl, the Bengals were given the opportunity to choose their uniforms. They ended up going with a black jersey, white pants and orange sock combination for the contest.

Talk about a glow-up. If you know, you know…#RuleItAll | #SuperBowl pic.twitter.com/Xf8zwRw8J5

The Bengals are taking a risk in choosing to avoid their white jersey. Fourteen of the last 17 Super Bowls have been won by the team wearing white. Evidently, the Bengals aren’t superstitious and believe they have a good chance to buck that trend.

Throughout the playoffs, the Bengals have worn both black and white uniforms. They wore their black uniforms with white pants against the Raiders in the wild-card round before wearing all-white uniforms in the next two games.

The Bengals have been to the Super Bowl twice before. In Super Bowl 16, they lost to the 49ers 26-21 while wearing their black uniforms. They wore all-white uniforms in Super Bowl 23 and lost 20-16, once again to the 49ers. 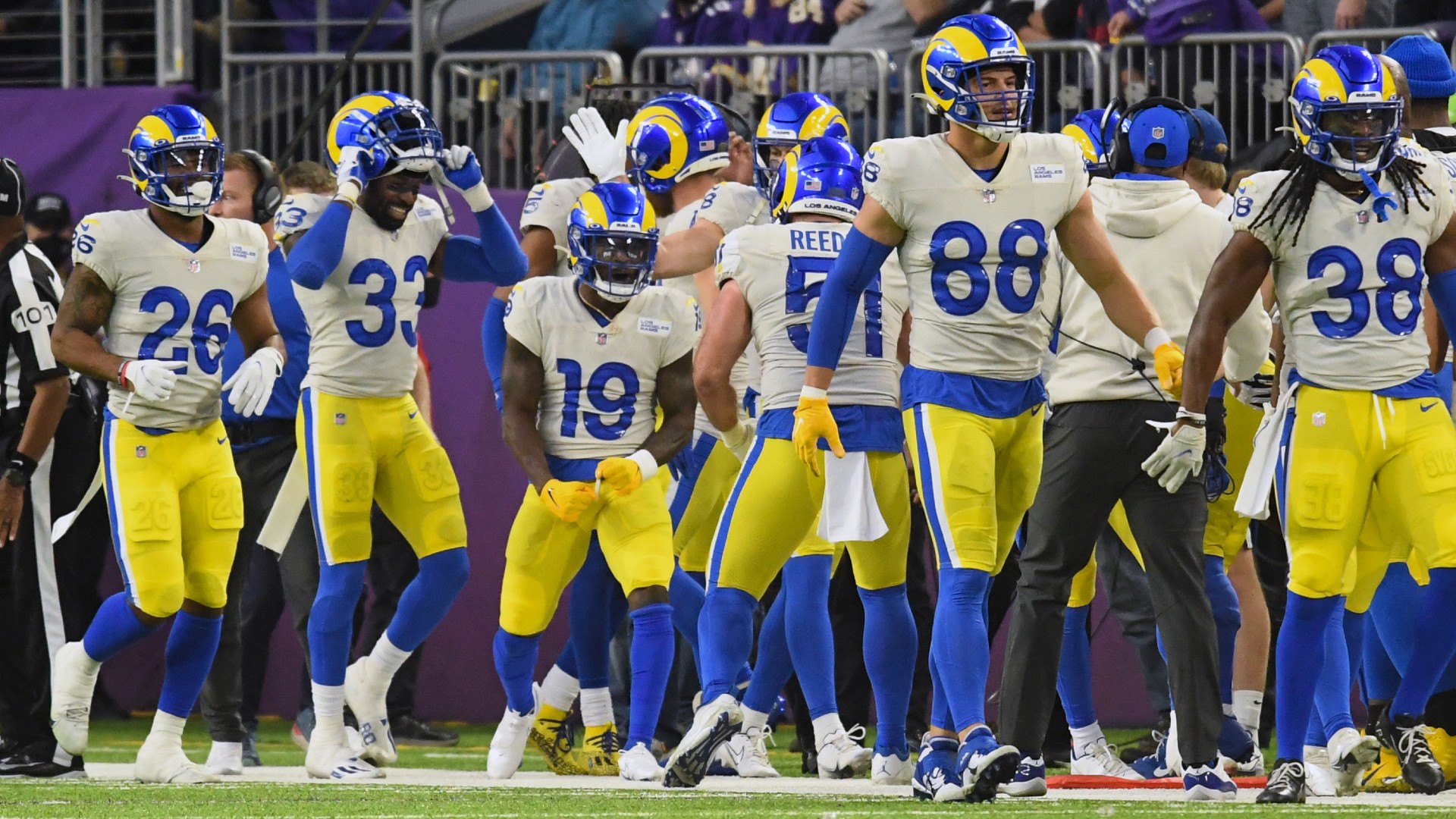 The Rams haven’t officially announced which uniforms they are wearing during the Super Bowl. However, because of the Bengals’ choice to wear black, it’s hard to imagine that the NFL would approve Los Angeles wearing royal blue. As such, the Rams will have to wear their off-white, bone gray jerseys. They will have three options to choose from with their pants: yellow (pictured above), royal blue or bone gray.

The Rams had worn their blue and yellow uniforms for the entirety of their playoff run before the Super Bowl. Cincinnati’s choice prevented them from donning those again, but they have a good record in their bone gray jerseys (7-1) so they won’t mind having to switch.

The Rams have been to the Super Bowl four times in their team’s history. They have a 1-3 Super Bowl record and their only win came wearing a white jersey. So, bone gray may treat them well in this matchup.

The Bengals have not been good when wearing their black jerseys in 2021. They have a record of just 2-4, while they have a 7-3 record in white jerseys and a 3-0 record in orange jerseys.

Again, the Bengals don’t seem fazed by this. They won the most recent game they played in the black uniform against the Raiders, so that may have given them confidence that those jerseys aren’t cursed.

The Rams have been excellent in their bone uniforms this season. They posted a 7-1 record wearing the jerseys during the regular season. Comparatively, they were 4-2 wearing their royal blue uniforms before their 3-0 playoff record bumped them up to 7-2 in that uniform.

So long as the Rams aren’t wearing their modern throwbacks, they should be in good shape. Los Angeles went just 1-2 in their three games wearing that jersey combination with their only win coming in Week 1 over the Bears.

The Bengals have been to the Super Bowl just twice in their franchise’s history. They have never won the big game, but they kept both of their meetings with the 49ers close; Cincinnati lost Super Bowls 16 and 23 by a combined nine points.

Is there a trend between the uniforms and those losses? Unfortunately, no. The Bengals are 0-2 in the Super Bowl but have worn their black jerseys once and their white jerseys once.

The Rams have been to four Super Bowls in their team’s history. They wore white in their first three appearances and went 1-2 in those contests. Their lone win came when the Rams tackled Kevin Dyson on the 1-yard line to stop the Titans from taking the lead in the final second of the Rams’ 23-16 victory.

Los Angeles has only played in one Super Bowl while wearing royal blue. That came against the Patriots in Super Bowl 53. The Rams lost that contest 13-3, giving them an 0-1 Super Bowl record in blue.