Between overheating and supply issues, high-performance mobile chipsets have had a bit of a rough year. Mediatek is perhaps the exception to the rule, having flown under the radar with only a handful of design wins, mostly confined to China, but dodging the heat issues that have dogged Samsung’s foundry. With the arrival of the Asus ROG Phone 6D on Western shores, we finally have our hands on Mediatek’s powerhouse chip to compare it to its far more ubiquitous rivals.

For today’s comparison, we have the latest high-performance chips from Mediatek and Qualcomm in the Dimensity 9000 Plus and Snapdragon 8 Plus Gen 1, respectively. Running inside the Asus ROG Phone 6 Pro and 6D Ultimate versions, we have two very similar handsets on offer as well, which removes the element of OEM-specific optimizations that can make chip-to-chip comparisons difficult. Let’s dive in.

Snapdragon 8 Plus Gen 1 vs Dimensity 9000 Plus specs

Before getting into the benchmark results, let’s recap the key inner workings that will affect the benchmarks we’re going to run on these chips.

There are a few differences to note here. For starters, we’re looking at very different GPUs. Qualcomm’s in-house Adreno architecture is a closely guarded secret, while Mediatek uses Arm’s off-the-shelf Mali-G710 in a 10-core configuration. There are key CPU differences to highlight, including a larger L3 and system-level cache in the Dimensity 9000 Plus. Mediatek’s chip also doesn’t make use of the A510’s merged core option, which could lend the chip an advantage in heavily threaded workloads, such as benchmarks.

The two chips are built on TSMC’s 4nm manufacturing node, which rules out the overheating bottleneck that limited the original Snapdragon 8 Gen 1. However, that doesn’t necessarily mean these chipsets don’t get hot, as we’ll see in a minute.

Snapdragon 8 Plus Gen 1 vs Dimensity 9000 Plus benchmarks

Turning to our suite of one-run tests, Mediatek’s Dimensity 9000 Plus takes the top spot by a noticeable margin (see the graphs below) — at least when it comes to CPU-heavy workloads like GeekBench 5 and while running the chip flat out using Asus’ X-Mode performance enhancer. The Snapdragon 8 Plus Gen 1 retains a lead when it comes to graphics performance, albeit by about only 8% in 3DMark’s Wild Life test.

As we mentioned earlier, Mediatek invested more silicon area into its shared caches, ensuring sufficient memory so that cores don’t have to resort to slower RAM. The use of individual small Cortex-A510 cores, rather than the merged core design used by Qualcomm, pays dividends for multi-threaded workloads, as each has its own L2 cache and SIMD engine for advanced number crunching. Importantly, this combination boosts performance across a variety of workloads, as seen by the very impressive PCMark performance score, even though the two chips use the same CPU cores when looking at a high level.

Again though, this is only the case where the chip runs at full tilt in X-Mode. Asus reigns in the Mediatek chip’s single-core performance when not in X-Mode, which isn’t the case with the Snapdragon-powered ROG 6 Pro we tested. Even so, Mediatek’s setup still marginally outperforms the Snapdragon implementation in PCMark even without X-Mode. However, these are definitely OEM-level optimizations, as other manufacturers post better performance out of the box.

The Dimensity 9000 Plus takes top spot in a number of key benchmarks.

While we like to see lots of memory to help maximize performance, benchmarks aren’t everything. Qualcomm’s more cache-reserved approach may have allowed it to invest in other silicon-intensive areas, such as graphics, image processors, and modem capabilities. But it’s impossible to know for sure without a die shot. Large memory pools cost power too, and we certainly saw the Dimensity 9000 Plus chugging down the juice during benchmarking.

Mediatek certainly looks to have the edge based on these results, but more testing will be needed to get into the fine details of load balancing and power consumption.

One-run benchmarks are fine but sustained performance has increasingly become an issue in recent chip generations. Qualcomm had to switch from Samsung to TSMC to address the throttling issues in time for the Snapdragon 8 Plus Gen 1. Mediatek has been using TSMC since the original Dimensity 9000.

Thankfully, our testing of Asus and OnePlus handsets sporting Qualcomm’s newer chipset show much improved sustained performance, even if the chip’s power draw remains a concern. The Plus variant in the ROG 6 Pro lasts about 10 runs before throttling back a bit, which is far better than the single runs we saw from the regular model.

Mediatek’s Dimensity 9000 Plus shows a better ability to sustain its peak performance without the need for bulky external cooling. With X-Mode enabled, Mediatek’s SoC survives 16 runs of 3DMark’s Wild Life Stress Test before any throttling occurs. Even then, performance scales back by just a few percentage points rather than dropping off a cliff.

While both chips will survive longer gaming sessions without dropping frame rates, the 9000 Plus performs better when Asus optimizes for power consumption. Although it doesn’t quite match the peak performance of the Snapdragon, it appears the Arm Mali G710 GPU scores its own victories.

A closer look: Snapdragon 8 Plus Gen 1 benchmarks and overheating fix

Even so, we are still quite alarmed by the peak temperatures we saw during benchmarks. The Dimensity chip hit 53°C while the Snapdragon was a fraction cooler at 51°C, both while running in X-Mode. The fact that Asus includes an air vent for better heat dissipation in the ROG Phone 6D tells you everything you need to know. Obtaining and sustaining peak performance produces a lot of heat, even on the most efficient manufacturing processes currently available.

Which chip should you pick? 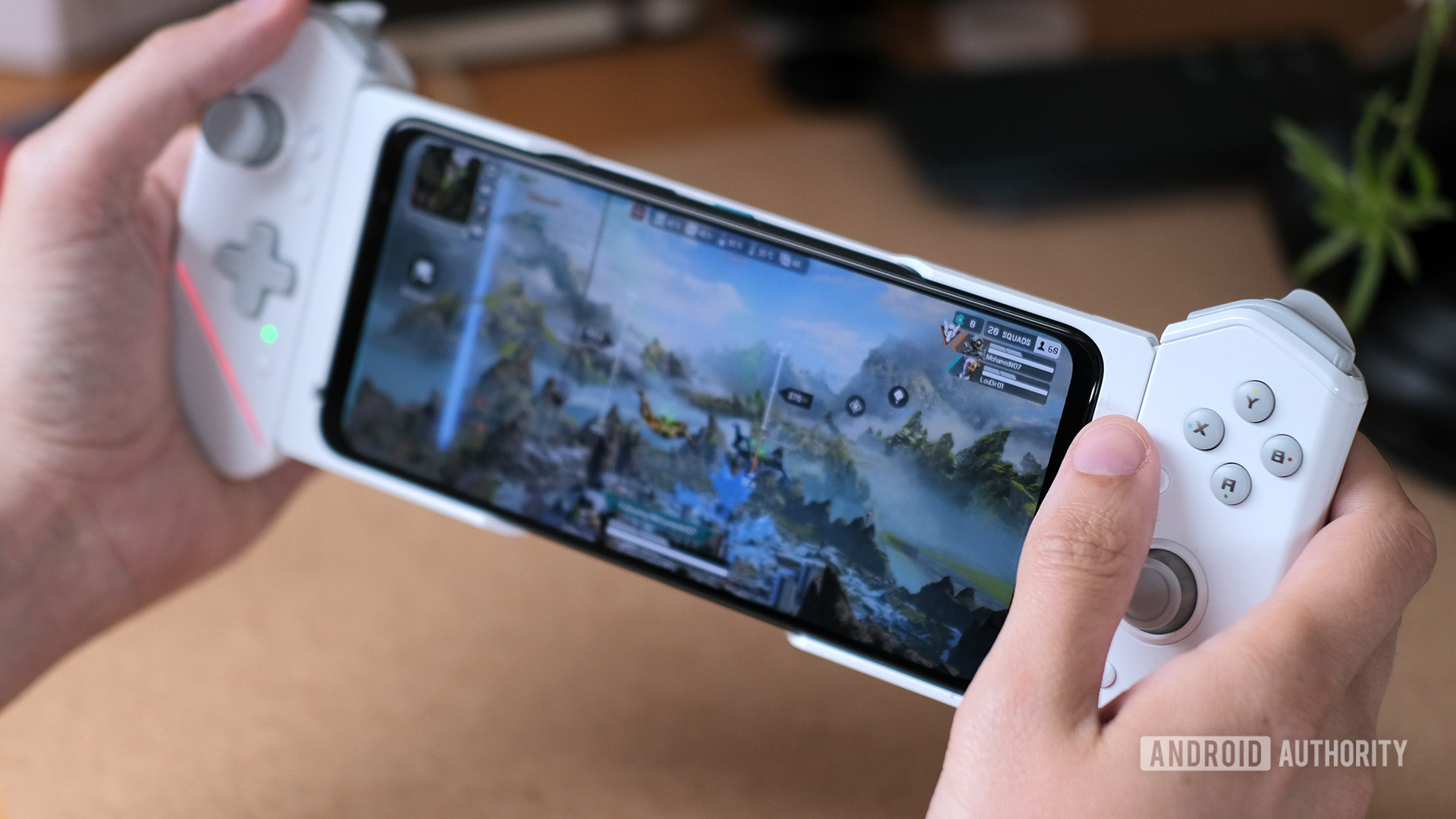 When we asked why Asus even offered the “D for Dimensity” version of its ROG Phone 6, the brand noted that it wanted to offer its customers a choice in best-in-class performance. Our results help us see where Asus is coming from; the Dimensity 9000 Plus is a benchmark-topping chip and performs well under stress.

That said, both chips fly equally high in real-world scenarios, including high-end gaming. However, the Snapdragon’s souped-up Adreno 730 GPU still hands in a higher score, making it a tad more future-proof for tomorrow’s high-end titles. Historically, Qualcomm’s Adreno architecture has seen more love from developers and better emulation support due to the platform’s popularity, which is also something to consider.

Dimensity claims the CPU benchmarks, while Snapdragon holds on in the GPU department.

Of course, modern mobile SoCs are about much more than CPU and GPU grunt, with 5G modems, image processing, video playback, and other capabilities equally important parts of today’s handsets. However, if you’re just looking for raw performance, both the Qualcomm Snapdragon 8 Plus Gen 1 and Mediatek Dimensity 9000 Plus have even the most demanding users well covered.