Smart locks have allowed us to ditch the keys and unlock our front doors via our phones for years. But while smart locks can be quite convenient, especially if they have pin pads or fingerprint scanners, using your phone to unlock the door can be as cumbersome as fumbling for the right key in the dark. You have to pull out your phone, unlock it, find the right app, tap the unlock button, and wait for the lock to respond.

Schlage’s new $299.99 Encode Plus, which was announced earlier this year and is now available for purchase, simplifies that greatly. As one of the first smart locks to take advantage of Apple’s Home Key standard announced at WWDC 2021, unlocking the Encode Plus is as simple as tapping your phone or watch against the keypad and waiting a moment for the green light. You don’t have to open an app, tap a button, or even unlock your phone. The whole process is similar to, but even simpler than, buying something with Apple Pay.

The Encode Plus is not exclusive to Apple devices, unlike some HomeKit video doorbells. It works with Android phones through the Schlage app and integrates with Amazon’s Alexa and Google Assistant. It also has a pin pad for guests or those in your family without phones, plus a traditional keyhole.

But if you’re going to shell out three Benjamins for this smart lock, you really should be carrying an iPhone or using an Apple Watch because its best trick only works with those devices.

In terms of design, the Encode Plus looks very similar to the prior Schlage Encode locks. Its obvious keypad doesn’t try to hide the fact that it’s a smart lock — in fact, the one notable difference between this one and prior versions are the parentheses around the 5 button that indicate where to tap your phone or watch. It’s not particularly subtle, but it’s far from the ugliest smart lock I’ve come across.

You can get the Encode Plus in two different styles with two different finishes for each; the review unit I’ve been testing is the Century design with a satin nickel finish. Below the keypad is a barrel for a traditional key (one key comes with the lock), which can come in handy if the batteries ever die and you’re locked out. But the primary way you’re intended to use the Encode Plus is via the keypad or tapping your phone.

The backside of the lock, or what’s on the inside of your door, is larger and blockier than the front. It provides room for four AA batteries, which Schlage says can last up to six months when the lock is used on Wi-Fi or up to a year if you use it with Thread. I’ve been testing the lock on my primary entrance for nearly two months, and the Apple Home app reports it has 82 percent battery life remaining. The lock will send alerts to your phone when the batteries are low. (Schlage does not recommend using rechargeable or lithium AA batteries since their voltages might throw off the battery life reporting system.) 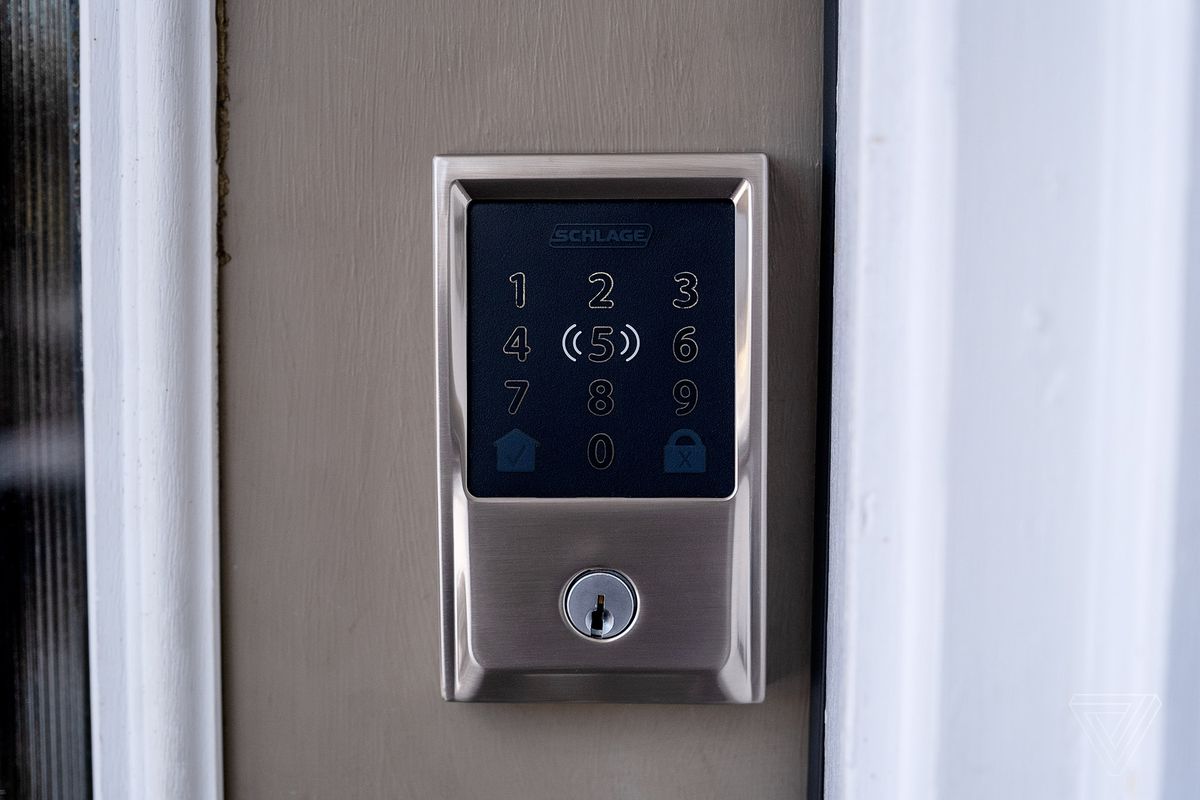 The Encode Plus has a simple design, but it doesn’t hide the fact that it’s a smart lock.

The only hardware feature missing here is a fingerprint scanner, which is a little easier to use than a keypad and can be useful if you have kids who don’t have phones or Apple Watches of their own. But with my family’s lifestyle and usage, we haven’t missed having one in the time I’ve been testing the lock.

Installing the lock is straightforward: it requires just a Phillips screwdriver and about 15 minutes of time. My front door is quite old and doesn’t quite line up perfectly when you casually close it, something that’s tripped up motorized door locks in the past. But the Encode’s deadbolt has a slight taper on each side, which helped guide it closed when the motor turned the lock — and made up for my door’s poor alignment.

The motor itself is not completely silent, and you can hear it whirring when it automatically locks or unlocks the door. (Soft chimes accompany the action to let you know if it’s been successful or failed.) Fortunately, it’s not especially loud, nor does it have an irritating grinding noise like some of the older smart locks. 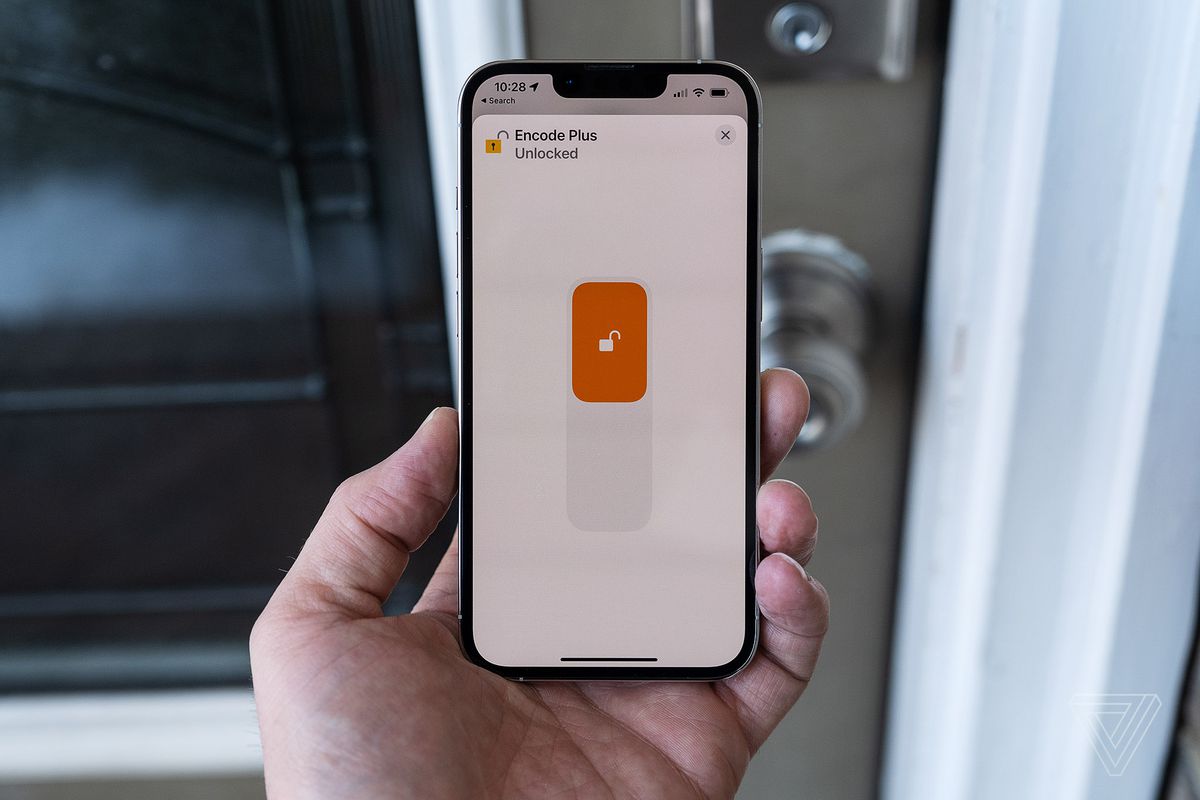 You can remotely control the lock or set up automations in the Apple Home app if you have a Home Hub like a HomePod Mini or Apple TV.

If you’re planning to use the Encode Plus with an iPhone and Apple HomeKit, you don’t even need to download Schlage’s app. You can add the lock right to Home app on your phone, configure passcodes, and control it directly or through automations. If you have a HomePod Mini or a second-generation Apple TV 4K, the Encode Plus will connect over the more power-efficient Thread protocol. Otherwise, it will use Bluetooth and Wi-Fi to connect to your other devices.

Adding the lock to the Home app also automatically adds the Home Key card to your iPhone’s and Apple Watch’s Wallet app — and anyone else’s that you have added to your Home. From there, you can enable the Express Mode, which will activate the key card without requiring you to unlock your phone or watch. Just tap it against the front of the lock and you’re in. If you want to have an extra layer of security, turning this off will require unlocking your phone before it will unlock the door.

If you’ve ever used Apple Pay, then getting accustomed to Home Key is very easy. Since my phone is almost always in my hand when I’m coming in the house, I can just tap it to the lock — no fussing with keys or opening an app and waiting for it to load. I can tap the phone to lock the door or just hit the little lock button on the lower right of the keypad. Outside of automations that unlock the door for me, it’s by far the simplest way I’ve interacted with a smart lock. 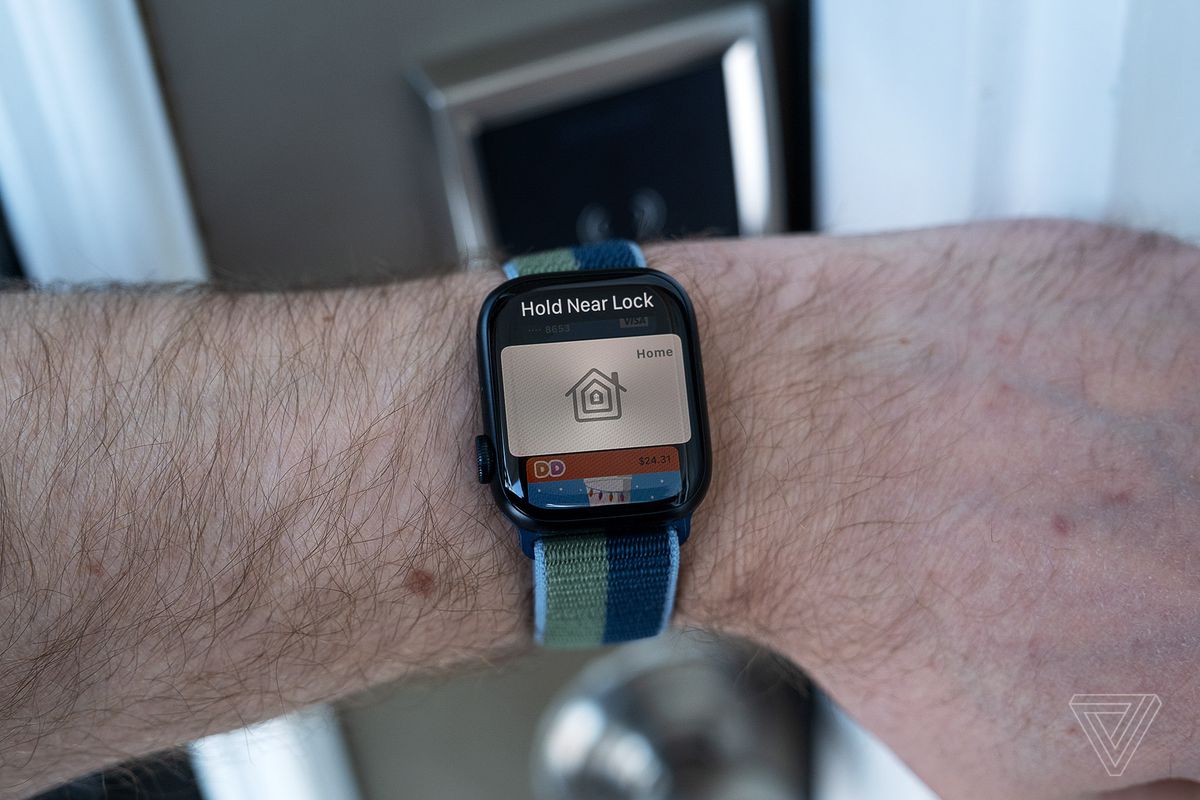 Adding the Encode Plus to your HomeKit home automatically adds the Home Key cards to the Wallet app on your iPhone and Apple Watch.

The Apple Watch integration works similarly, but it’s a bit more awkward because twisting my arm around to tap the Watch to the front of the lock isn’t as easy as using my phone. But if you’re the type to have your phone stashed away in your bag, the Watch integration is helpful.

You can also program various guest codes in the Home app for other family members or visitors. This functionality is quite basic; you can name the guest and set up a code, but there isn’t any option to make it limited to a specific time block or give it an expiration date. To remove access, you delete the guest in the Home app.

Controlling the lock via the Home app over a Thread connection is very fast — much more so than Bluetooth or Wi-Fi locks. There were a couple of times where I pushed the button in the app and, before I even looked up from my phone, the door was already latched. 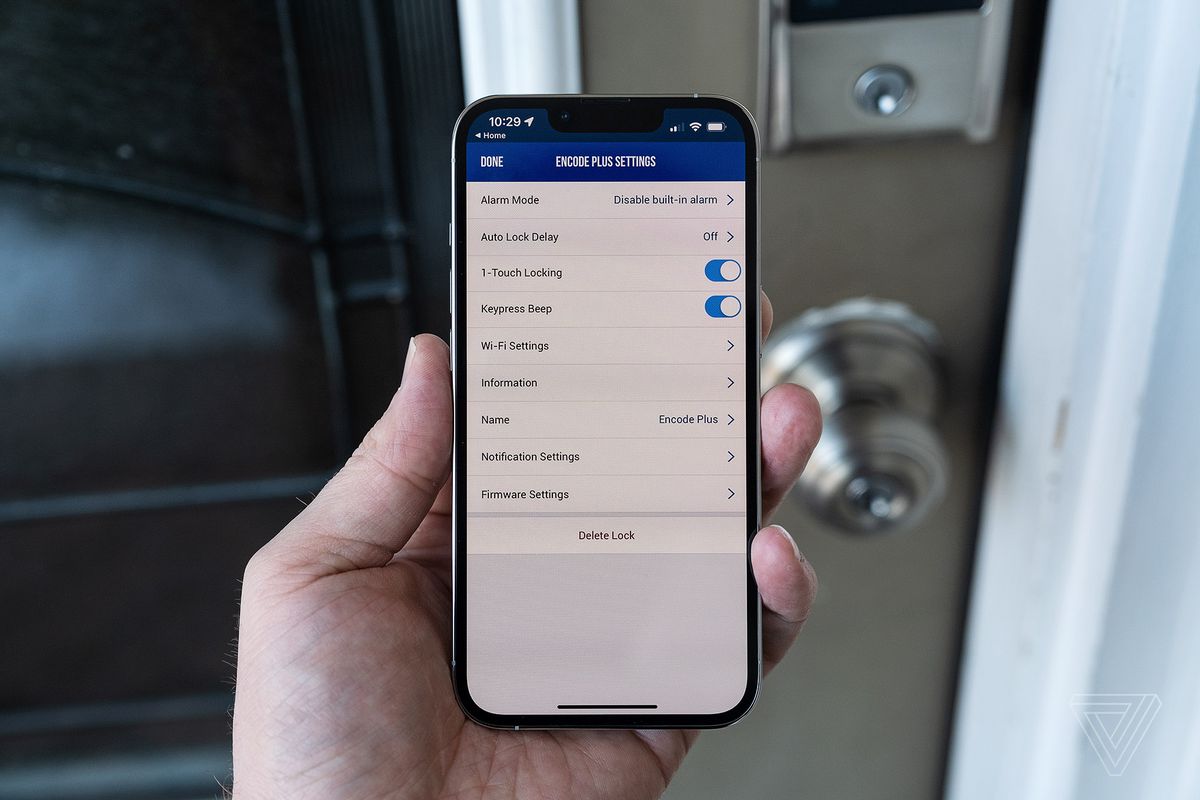 The standalone Schlage app is necessary to set up integration with Amazon Alexa or Google Assistant. It also provides a few options lacking in Apple’s Home app.

The Schlage app provides a few more options, including the ability to set the door to lock automatically after a certain time period (between 15 seconds and 4 minutes, depending on your preference). It also provides the ability to connect the lock to Alexa or Google Assistant to control it in those platforms. While iPhone owners won’t need to use the Schlage app at all, Android phone users will have to use it for setup and to control the lock. Once it’s set up, Android owners can also control the lock through the Google Home or Amazon Alexa apps.

While the Encode Plus is firmly on the expensive side of the smart lock spectrum (it’s not hard to find options for well under $200 at this point), it provides the best experience I’ve had yet with a smart lock, especially if you own an iPhone and have a HomeKit smart home.