A dead smartphone is a scary prospect and one that refuses to accept power from the wall can be similarly unsettling. Luckily, though, most charging-related issues can be resolved without mailing in your device for an expensive repair. If your Samsung Galaxy smartphone doesn’t charge, here are a few things you can try to bring it back to life.

If your Samsung smartphone doesn’t charge, check the USB-C port for debris or moisture and try charging with a different adapter and cable. If neither of those solutions work, you may have to replace the phone’s charge port.

From moisture to lint, there are plenty of reasons why your Samsung Galaxy smartphone might not charge anymore. Luckily, most of these are short-lived events, which means you should be able to get up and running with a few simple fixes.

That said, repeated plugging and unplugging over time could also irreversibly wear out the charge port. If that’s the case, your only option will be to replace it with a new one. But let’s not get ahead of ourselves — here are a few things you can try if your Samsung smartphone refuses to charge. 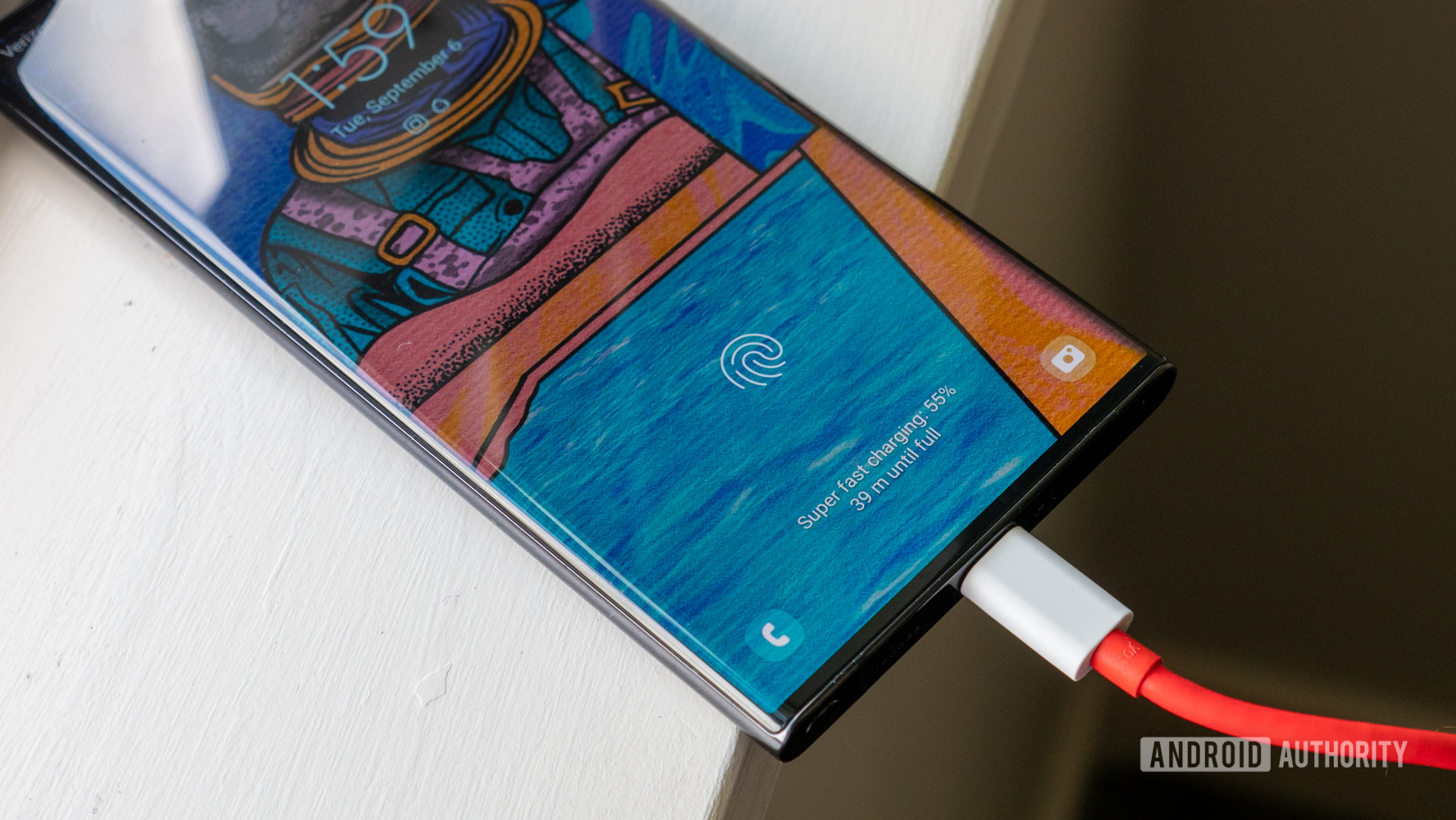 Over years of regular use, it’s common for sand, lint, and dust to build up in crevices like the USB-C charge port. Needless to say, debris can prevent the port from conducting electricity. In some cases, it can also block the phone from being able to communicate with the adapter, limiting fast charging. Luckily, fixing this issue is rather straightforward.

2. Force your Samsung smartphone to restart

If your smartphone worked just fine recently but doesn’t show signs of life anymore, the operating system may have crashed. Simply press and hold the Volume Down and Power buttons for 10 to 20 seconds and you should be able to force a shutdown. Release the buttons once the Samsung logo appears. Once the phone boots up successfully, plug it in immediately and check if it charges.

Read more: How to turn off or restart your Samsung device

3. Use a different adapter, cable, and outlet

If neither of the above solutions worked for you, the problem might lie in a faulty adapter or cable. Topping up your phone’s battery multiple times a day can chew through the cable’s lifespan pretty quickly. USB-C ports and plugs can only withstand so many insertion cycles, after all. And that’s not even considering any damage or corrosion that could have built up over time.

Simply plug in your smartphone using a different USB-C adapter and cable. And while you’re at it, ensure that there’s nothing wrong with your power outlet either.

4. Try wireless charging if your smartphone supports it 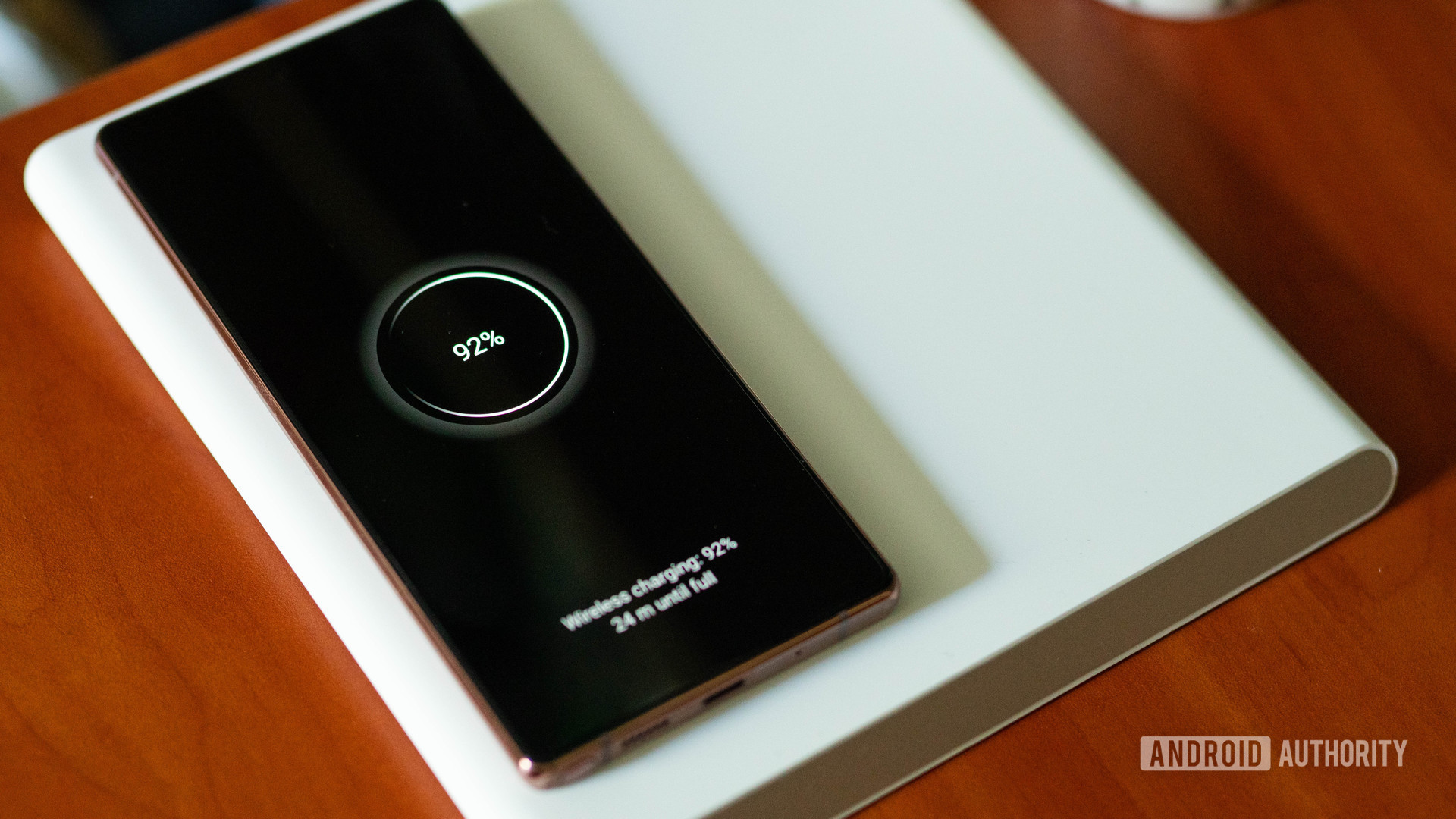 If you own a premium Samsung smartphone like one from the Galaxy S22 series, don’t forget that you can also charge your device wirelessly. Any Qi wireless charger should do the trick, even if it’s from a different brand. Simply place the smartphone on the charging pad and wait a few seconds for the charging animation to show up.

5. Dry your smartphone if it was exposed to water

Many modern Samsung Galaxy smartphones sport IP67 or IP68 water resistance. In other words, they can withstand accidental spills and splashes as well as light rain. However, that doesn’t mean your smartphone is immune to water.

If water is detected inside the USB-C port, Samsung’s One UI operating system automatically blocks charging as a precaution. So if your device was recently exposed to water, set it aside to dry out completely before plugging it in again.

Related: Everything you need to know about smartphone IP ratings

6. Replace the charge port or battery

As we alluded to earlier, smartphone batteries and charge ports don’t last forever. It’s common for these components to degrade over three or more years of use — especially if you’re a heavy user. But that doesn’t mean you need to buy a new phone.

OnePlus 10 Pro could launch outside of China on these dates

Most brands, including Samsung, will replace the battery and charge port in short order if you can drop off or mail in your device. The total bill should not exceed $100 including taxes and labor. That’s a good deal when you consider that a new smartphone will cost you several times that amount.

Read more: How to replace your smartphone’s battery

Why is my Samsung device not charging when plugged in?

If your Samsung smartphone doesn’t charge, check if the cable or adapter is faulty or if dirt, debris, or lint has made its way inside the USB-C charge port.

How to tell if your smartphone’s USB-C charge port is broken?

USB-C ports don’t last forever, they can only survive a few thousand insertion cycles. If your device no longer fast charges or you’re unable to transfer files via a data cable, you may be dealing with a failing port.

How do I clean my smartphone’s USB-C port?

The easiest way to clean your smartphone’s USB-C charge port is using a can of compressed air. Over time, dirt and debris can accumulate in this crevice, which could affect charging performance.

Can the charging port on a Samsung phone be fixed?