Our first look at what seems to be the Google Pixel Watch comes under strange circumstances: someone supposedly found its prototype lying around at a restaurant and sent pictures of it to Android Central on the condition of anonymity. The images of the purported device match up with what we’ve seen from previously leaked renders, down to the circular watch face and rotating crown.

The watch appears to have a physical crown sitting between two buttons.Image: Android Central

As shown in the photos, a physical crown sits between two buttons on the side of the watch. If it’s anything like the Samsung Galaxy Watch 4, the two buttons could be used to turn the watch on or off, return to the home screen, or even as a shortcut to pull up recently used apps. Meanwhile, the small hole next to the crown could be a microphone or perhaps an altimeter sensor used to track stair climbing. As Android Central notes, the four pins on the side of the watch may be used for testing purposes, and may not appear on the final model.

The underside of the watch features a black frame with what looks like an oval-shaped health-tracking sensor in the center. Android Central’s source also says the bottom of the watch has a smooth feel, noting it “looks metallic but feels like it’s coated with glass,” akin to the glass backing on the Apple Watch. 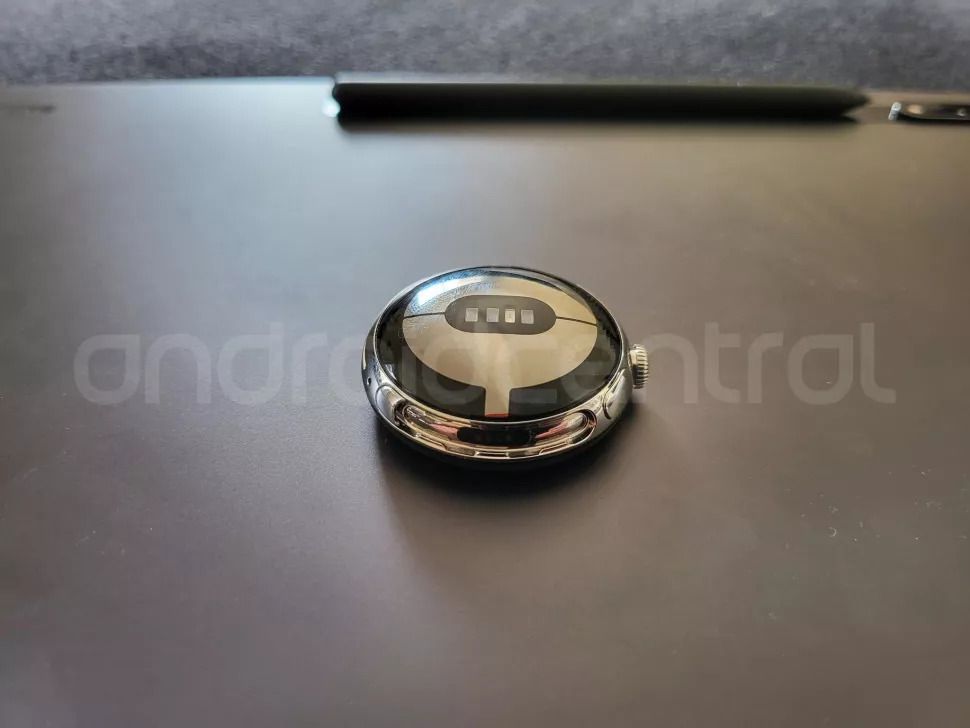 What appears to be a sensor is found on the underside of the watch.Image: Android Central

Unfortunately, Android Central’s source wasn’t able to fully boot up the watch to see how the user interface might look. When they tried turning it on, a white Google logo appeared and nothing happened after that.

A charger wasn’t left with the watch either, but as Android Central notes, the watch may be charged within its case, just like the Apple Watch and Google-owned Fitbit Versa 3 and Sense smartwatches. While there aren’t any pictures of the strap actually attached to the watch, it looks like it comes with a propriety method for snapping in the straps, while the straps themselves resemble the ones that come with Fitbit’s smartwatch line. You can view the entirety of the leaked images on Android Central’s site.

The strap looks similar to the ones found on the Fitbit Versa and Sense smartwatches.Image: Android Central

What’s almost more interesting than the watch itself is the story behind it. Thanks to an Ask Me Anything (AMA) post on Reddit by u/tagtech414, the person who claims to be in ownership of the watch, we can start piecing things together. (And yes, the person posting seems legit — he shows an image of the watch on his laptop screen with his Reddit post in the background.)

As for why the strap isn’t attached to the watch itself, he claims his friend forgot to give it to him, citing “they were packaged separately and he forgot to bring them over, so he sent me pictures of them for the article.” u/tagtech414 also answered some additional questions about the watch’s specs, noting that the bezel is actually quite large, and that the watch face is about 1.5 inches in diameter and half an inch thick. It looks like u/tagtech414 is still updating the post, so there may be even more information soon.

Even still, the situation is similar to the way the iPhone 4 was leaked way back in 2010 — someone found an iPhone prototype in a restaurant, which was then purchased and torn down by Gizmodo (the photos of which all mysteriously disappeared from Gizmodo’s website, by the way). It turns out a software engineer left the prototype there, so it’s clear that such a situation has and can occur.

But what’s weird about this case of lost and found is that it doesn’t seem like Google is even looking for the device (unlike Apple which put out a call to get its iPhone prototype back at the time). u/tagtech414 also says he hasn’t been contacted by Google yet. Of course, there’s always the possibility that this could all be some elaborate ruse by Google to get more publicity for its upcoming watch, as this is all very reminiscent of the time a Pixel 3 XL was found in the back of a Lyft (did you think we’d forget already, Google?).

There are so many questions left unanswered here, and while the circumstances surrounding the discovery of the watch may never be cleared up entirely, at least the features of the actual watch will. So far, we know that Google will call the device the Pixel Watch (huge surprise there), and we’ll likely find out even more details at next month’s Google I/O.

Update April 24th 7:22PM ET: Updated to add that the person claiming to be in ownership of the Pixel Watch prototype started an AMA post on Reddit, and added some additional information provided by the Reddit post.