Mac Shipments Up in Q1 2022 Amid Worldwide PC Shipment Decline

Apple’s worldwide Mac shipments were slightly up in the first quarter of 2022, according to new PC shipping estimates shared this afternoon by Gartner. Apple shipped an estimated 7 million Macs during the quarter, up from 6.5 million in the year-ago quarter, marking 8.6 percent growth.

Apple was the number four vendor during the quarter, a position that it has held for some time. Market share was at 9 percent, up from 7.7 percent in Q1 2021. The overall PC market was more unstable, and several vendors saw a decrease in shipments. 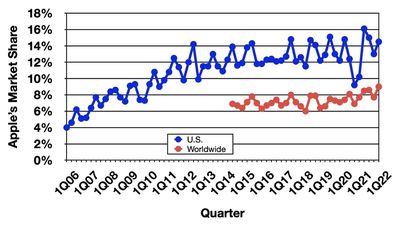 Dell, HP, and Lenovo all shipped more PC units than Apple in the U.S., with shipments of 5.1 million, 4.3 million, and 3.3 million, respectively.

Apple has seen success with its M1-based Macs, most recently introducing the M1 Pro and M1 Max MacBook Pro models in October 2021 and the ‌M1 Max‌ and M1 Ultra Mac Studio models in March. Apple is close to converting its entire Mac line to Apple silicon powered machines, with just the Mac mini and the Mac Pro continuing to use Intel chips.

IDC also released its own shipping estimates this morning, noting similar growth for Apple. According to IDC, Apple shipped an estimated 7.2 million Macs, up from an estimated 6.9 million in the year-ago quarter.

Data shared by Gartner and IDC is estimated and not reflective of Apple’s actual sales, and the numbers can fluctuate quite a bit over time. Estimated data used to be able to be confirmed when Apple provided quarterly earnings results with actual Mac sales information, but Apple no longer breaks out unit sales for the iPhone, iPad, and Mac, making it impossible to determine exact sales numbers.