Lego’s original spaceship, the Galaxy Explorer, is back and better than ever

Last January, Lego promised its 90th anniversary would be one to remember: the company agreed to revive one of its classic Lego themes (like Space, Castle, and Pirates) with a new, adult-grade Lego set.

But it turns out we’re not just getting one nostalgia bomb today — the company has decided to bring back classic Space and classic Castle at the same time. First, Lego is revealing the Galaxy Explorer, a $100 upscaled version of the original iconic Lego spaceship that will go up for pre-order today. And second, it’s announcing the Lion Knights’ Castle, which — at $400 and 4,514 pieces — is easily the most intricate and impressive castle playset the company’s ever produced.

For more about Lego’s new castle instead, tap here.

For days now, I’ve been pouring over the high-resolution photos of each set you’ll find below, marveling over the details and hidden play features. But I didn’t have to do it by myself: I also got to speak to their lead designers Mike Psiaki (also see: Titanic, Saturn V, A007’s Aston Martin DB5) and Milan Madge (Space Shuttle Discovery, Pirates of Barracuda Bay, Central Perk). I even got to speak to Niels Milan Pedersen, a 44-year veteran who co-created Lego Pirates and Forestmen, worked on many classic Space themes, and designed many of the most iconic forts, castles, and ships including the Black Knight’s Castle, the Royal Knight’s Castle I was lucky enough to own as a kid, and the legendary Black Seas Barracuda. 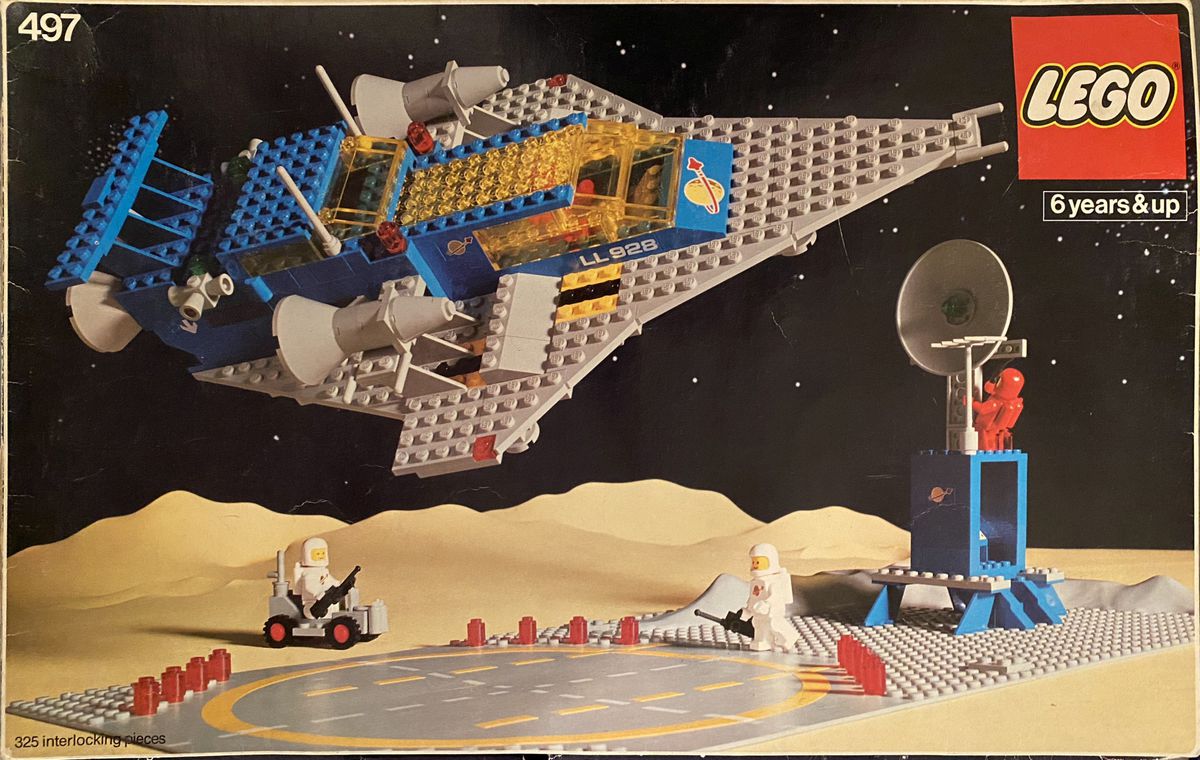 The original 1979 Galaxy Explorer set. Photo: Back of the Box Builds

With the Galaxy Explorer, says Psiaki, the goal was to trigger nostalgia by building the ship you think you remember — not the one that actually existed. Most people have only ever seen photos of the original 1979 set, and even those kids who’ve held one aren’t kids anymore. Here’s what he told me:

We’ve noticed adults generally remember the Lego kits of their childhood to be much more impressive and immersive than they really, truly are — and our big bet that we’re taking with this model, the hypothesis that we’ve come up with is it’s about how big they are. So like when you’re a kid, you’re a lot smaller. Now, you’re just physically larger and take up much more space. Seeing that same set through the eyes of an adult, it doesn’t command as much of your field of view, essentially, right?

How much bigger, though? When Psiaki realized he was 50 percent taller than his own seven-year-old son, that became the reference point. The new 1,246-piece Galaxy Explorer is roughly 50 percent larger in every dimension — “engines that are two modules around, we make them three modules, the width of the wings gets wider, the thickness of the plate,” and anything else designers could stretch.

As you can see, the Galaxy Explorer’s airframe has some height to it now — in 1979, it was largely constructed of thin, flat grey plates. The new one’s also 20.5 inches, or 52 centimeters long. 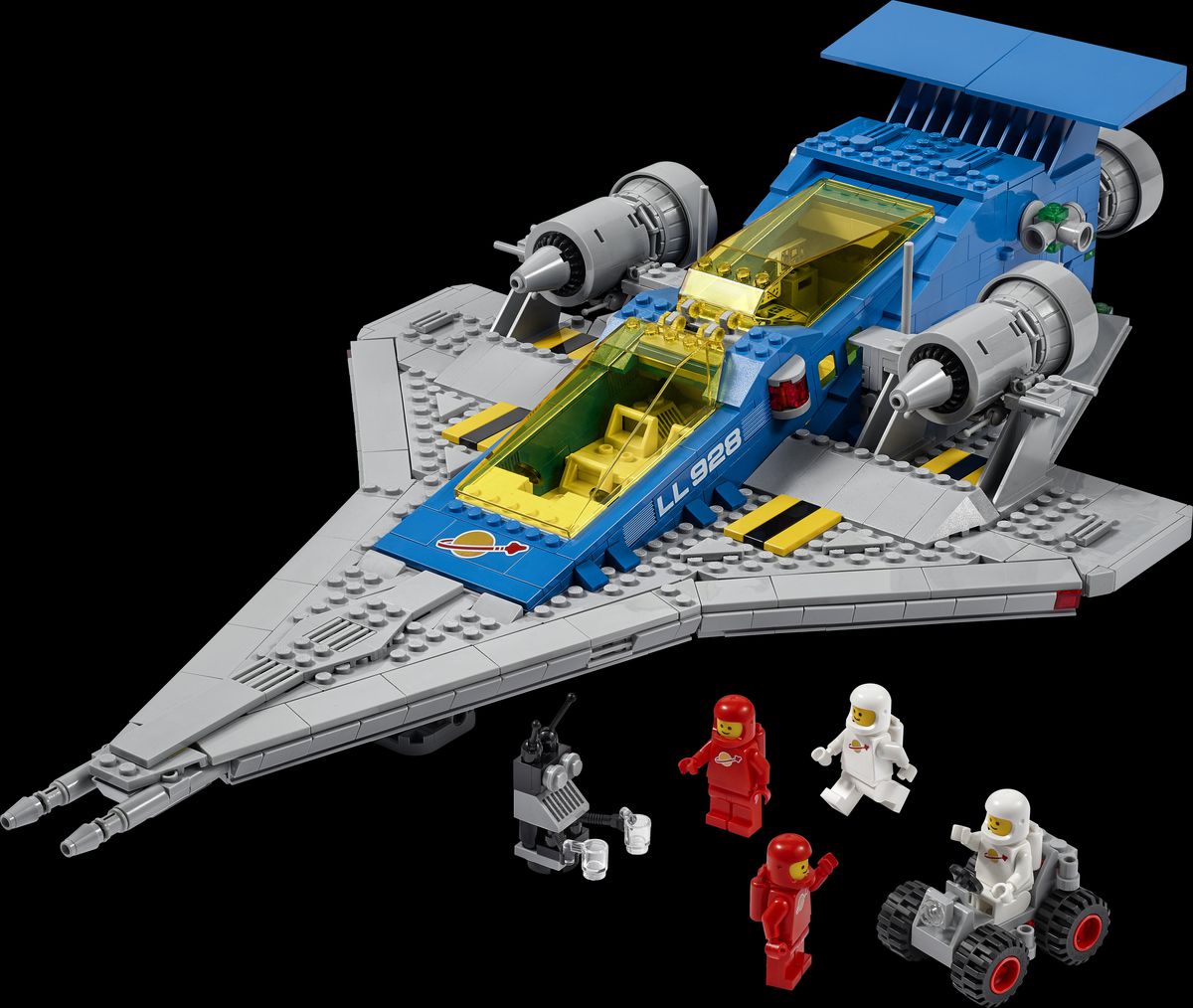 See the robot? It originally appeared in Lego 6809, and it doesn’t have a name. “Internally we like to joke that it’s the Cosmobot because it’s definitely not an astromech. If you come up with a great name, we would consider making that canon.”Photo: Lego 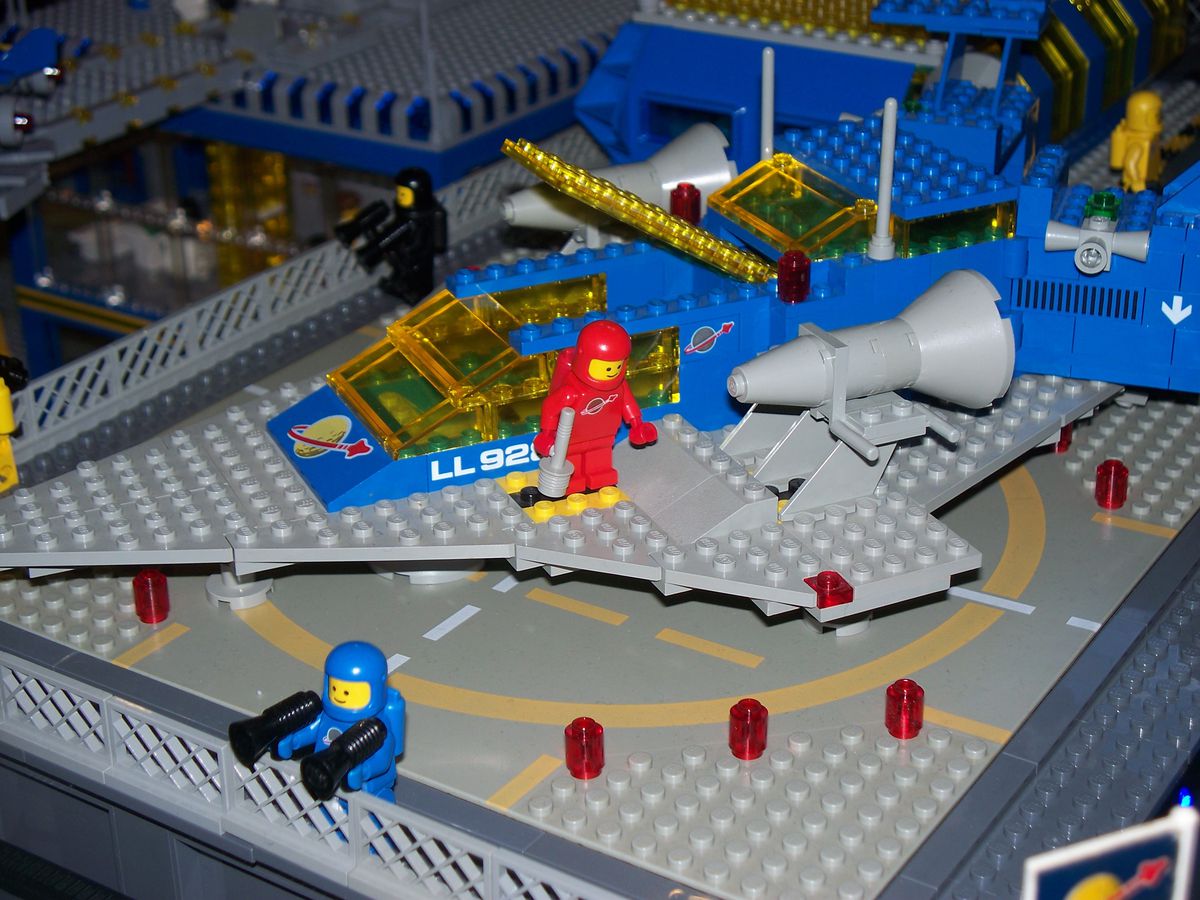 But interestingly, it wasn’t always going to be that way. “We originally went down this route of like, okay, how do we modernize the Galaxy Explorer,” says Psiaki. “How would this actually work as a spacecraft?” But that approach was abandoned after they found themselves essentially building another Space Shuttle Discovery, and they threw out modernized designs for the spacemen, too. 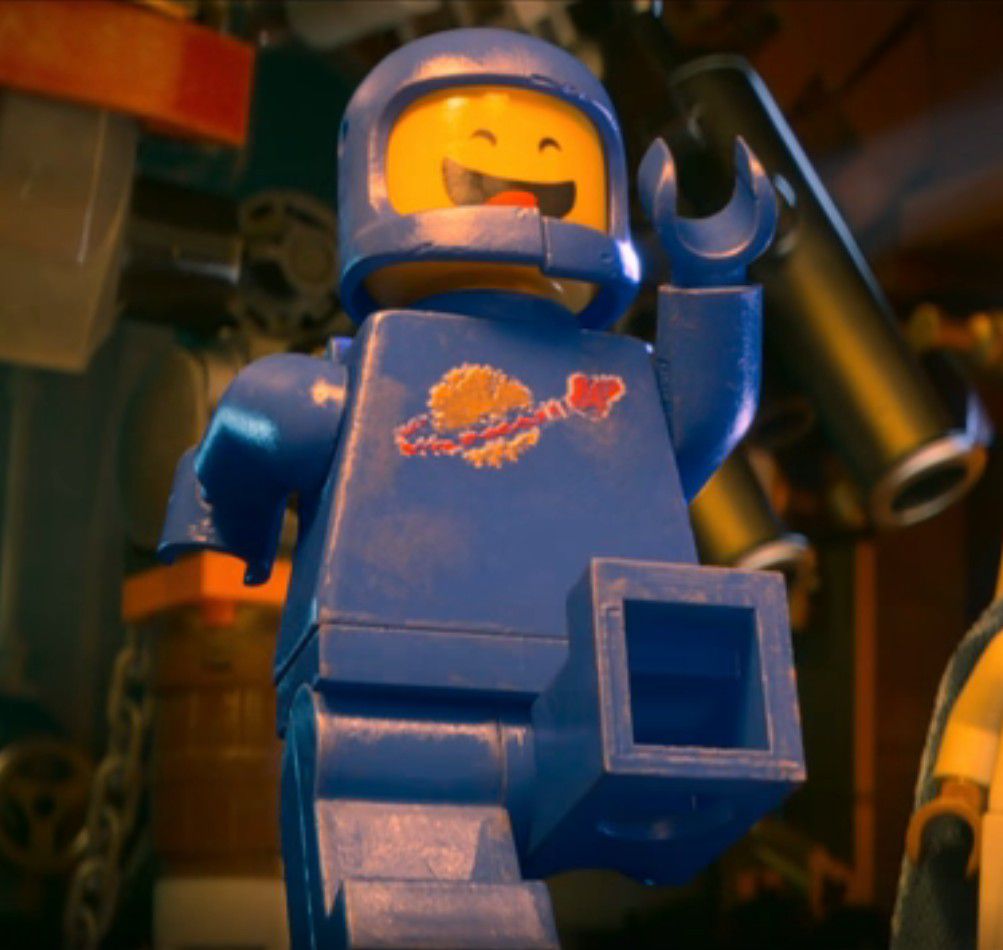 Benny, the astronaut from The Lego Movie, with his stereotypical broken helmet.

But Psiaki’s team did find a few places to modernize the set where it seemed thematically appropriate. Some of the original printed Lego computer bricks have returned — but as flat tiles now instead of sloped monitors, making them look less like CRTs and allowing more of them to fit in the cockpit. You not only get the classic Lego space helmet, but a newer version with a thickened chin strap that’s less likely to break. “That was the joke in The Lego Movie, where Benny has the molded helmet with the broken thing because that’s how everyone remembers that helmet,” Psiaki relates. 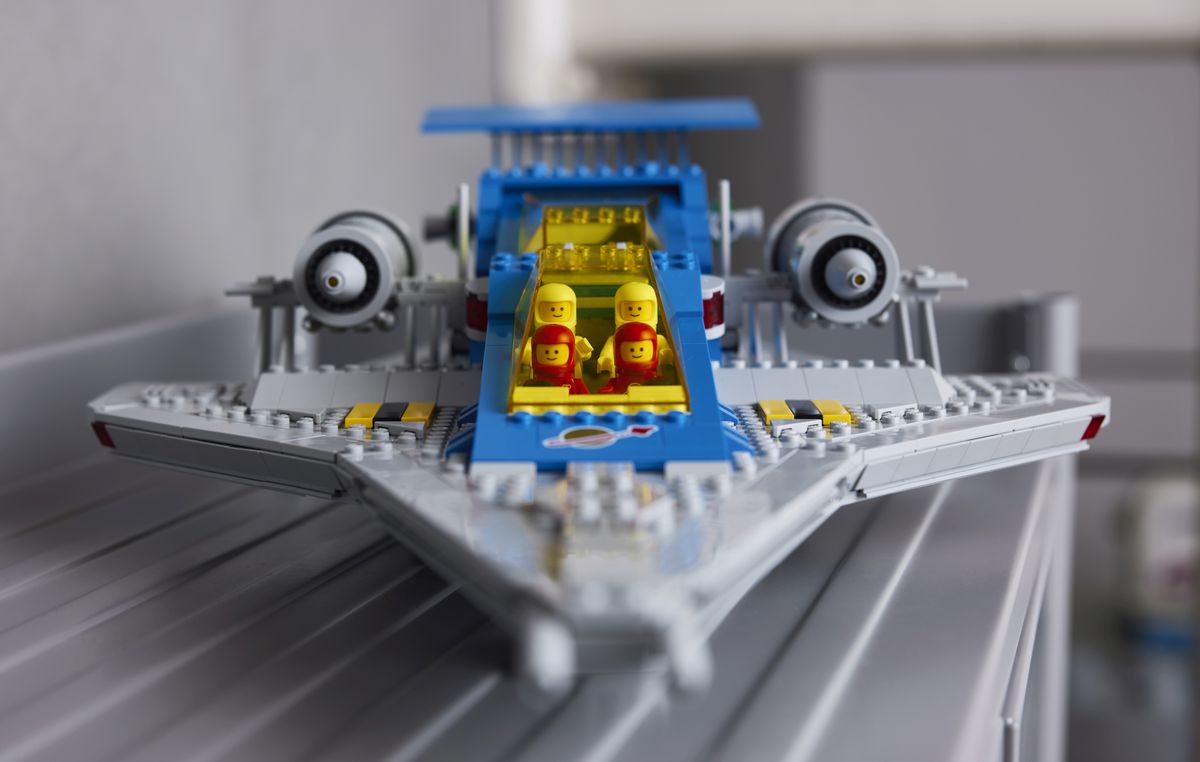 Psiaki says the classic helmet lets Lego fit four minifigs in the cockpit, which didn’t quite work with a modernized one they tested.Image: Lego 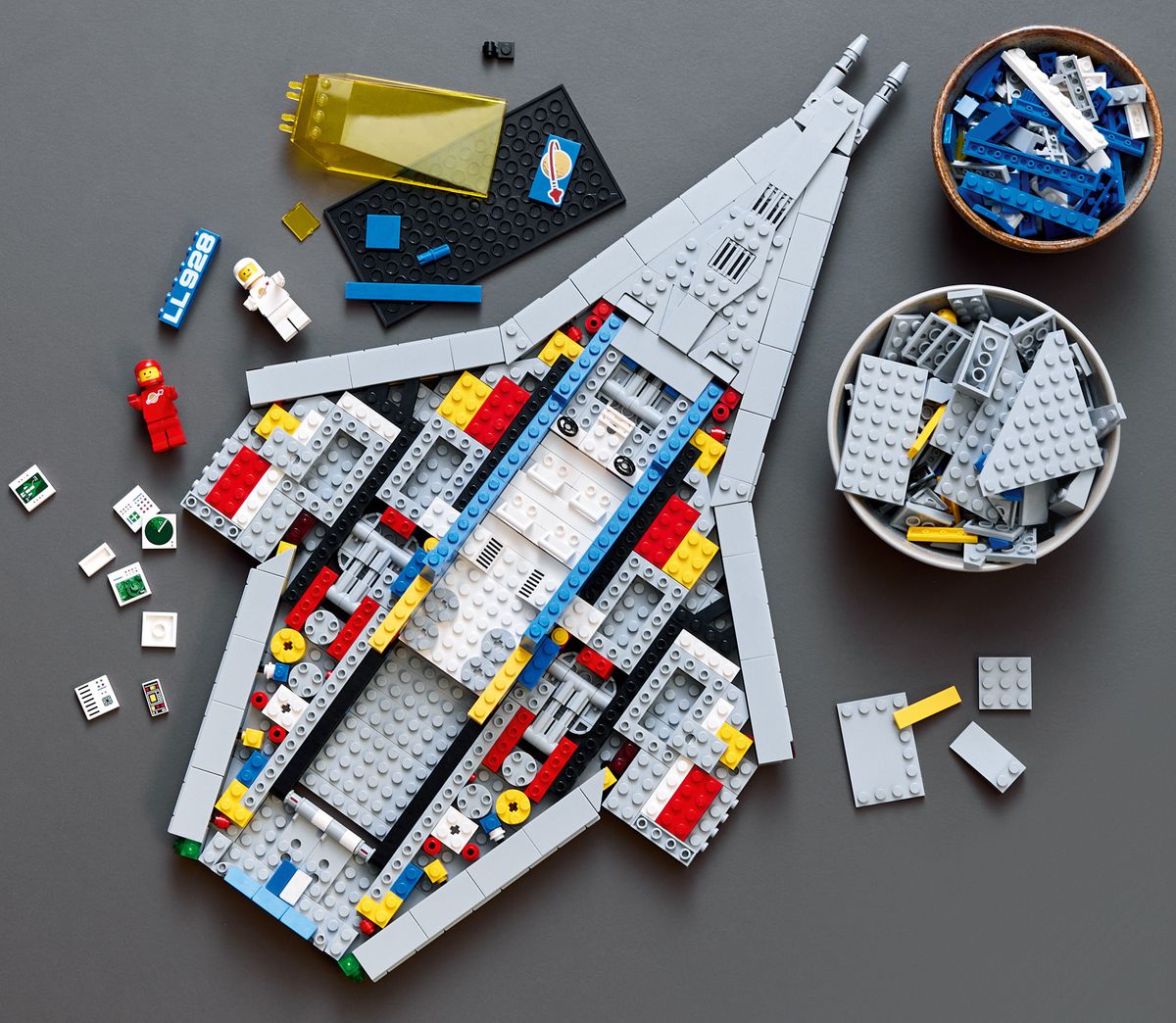 And where the original only had a handful of stationary detachable columns to serve as landing gear, you can flip the new set’s landing gear right up into the frame. “I just loved vehicles where you can fold up all the landing gear; I remember being really disappointed in like the first Lego Millennium Falcon that the struts were all just attached. Like, come on, those are supposed to fold up!” Please, Lego, let him work on an Ultimate Millennium Falcon where they actually do.

Apple to developers: if we deleted your old app, it deserved it 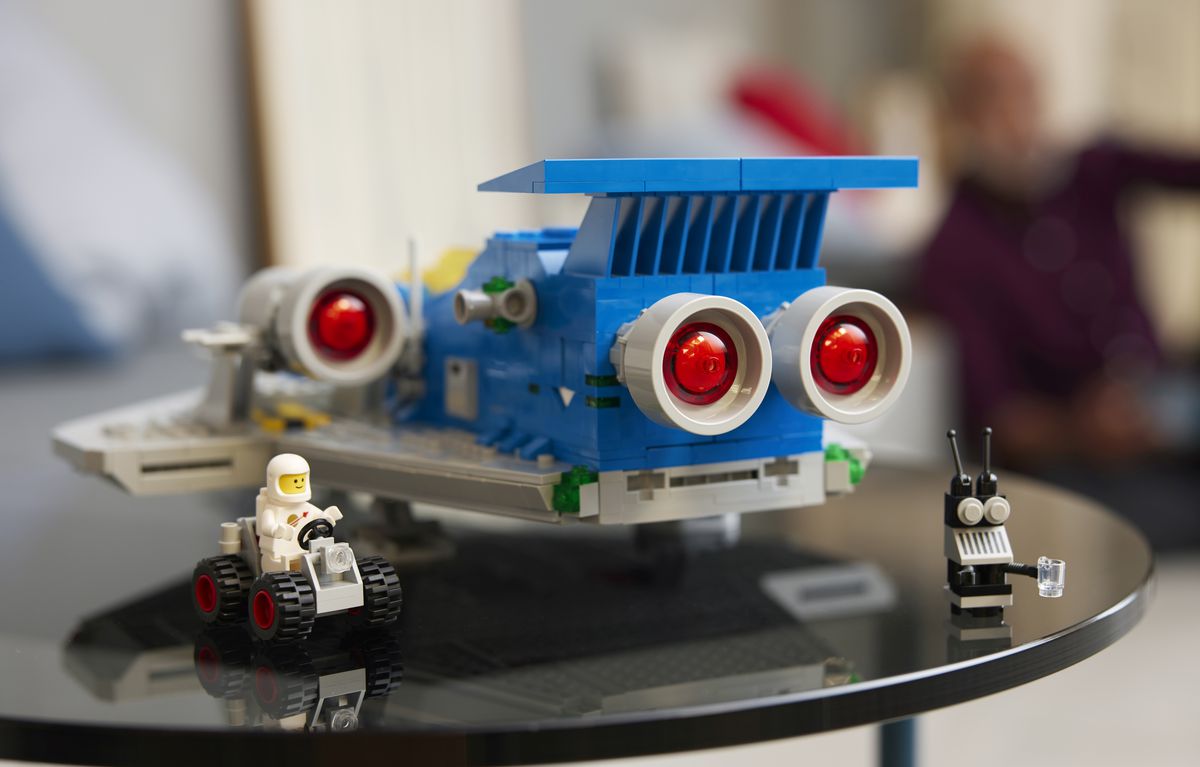 Like the original, there’s a hidden garage inside for the rover. “I don’t want to spoil how it works, but there’s a little play feature where you slide out the ramp and then you drop it and the rover…” he trails off.Image: Lego 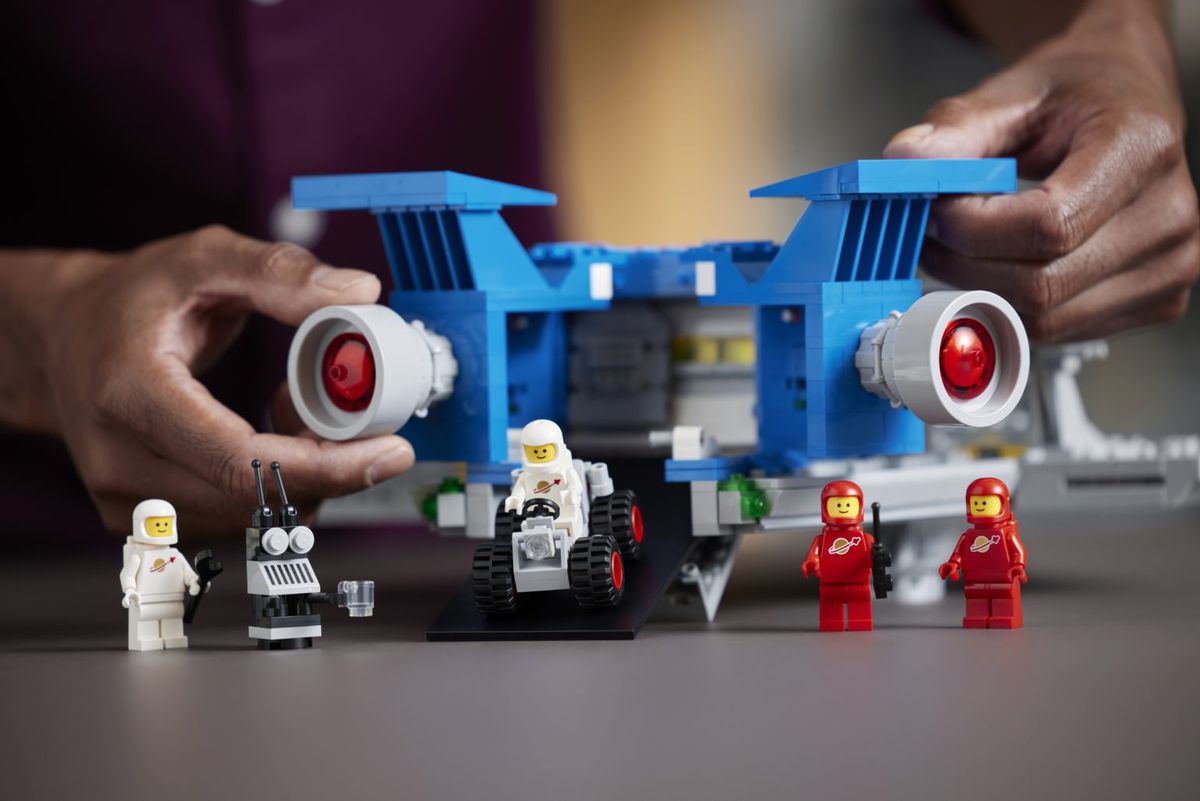 Not every part of the classic Galaxy Explorer made the cut: the original came with a landing pad — you can see a thematic nod to it in the picture below, as well as what appear to be a pair of alternate builds, but it’s not clear if they’re official parts of the set. And while the new cockpit fits four minifigs simultaneously, it doesn’t have quite the retro feel of the original’s flat-top lifter. 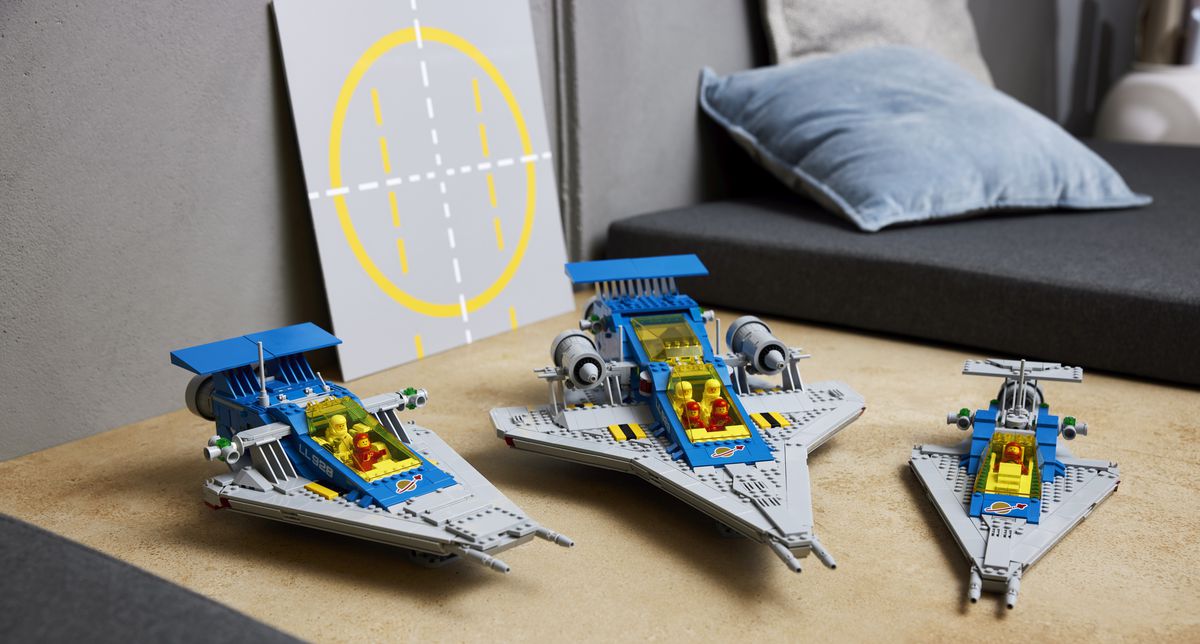 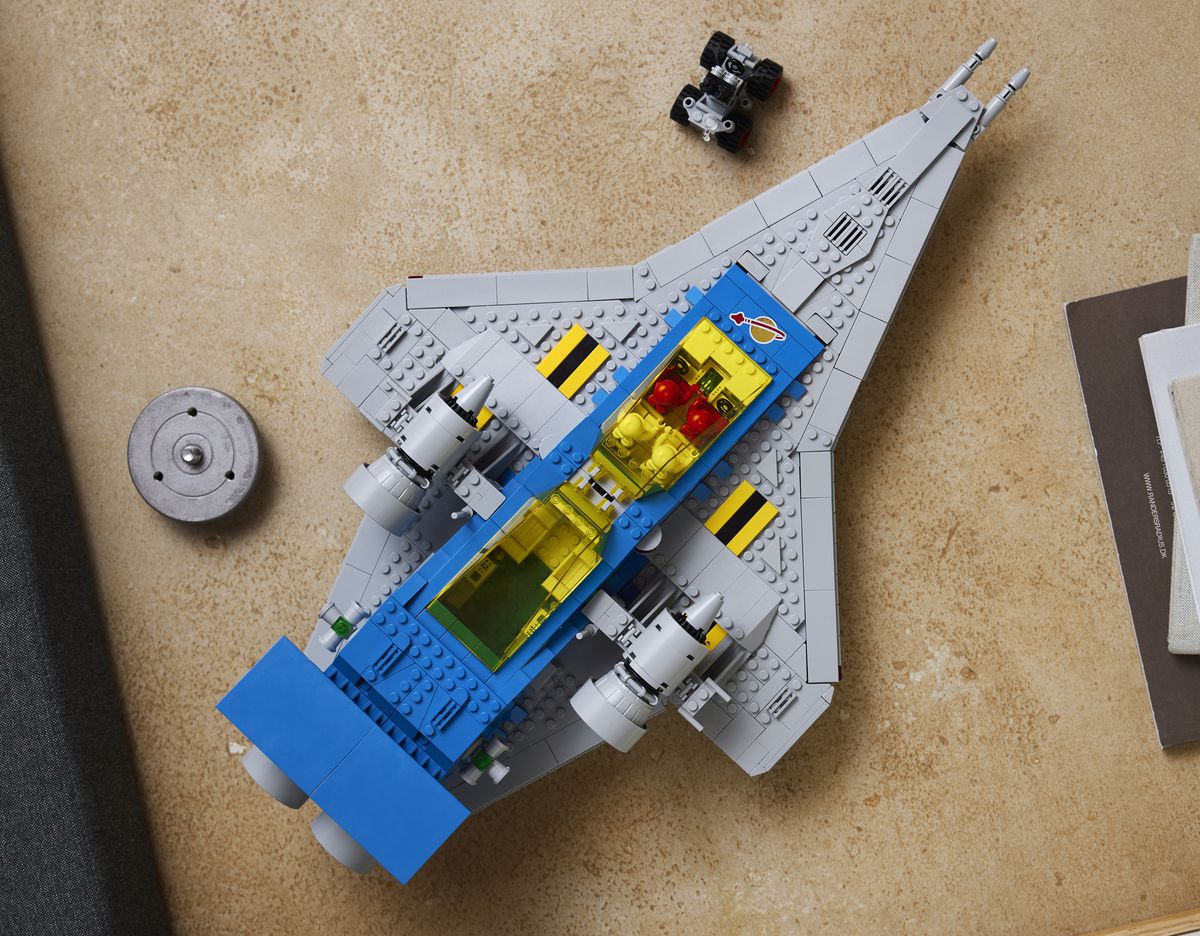 One last image of the new Galaxy Explorer. Blow it up to see inside the cockpit and command center.

Unfortunately, I wasn’t able to speak with the Galaxy Explorer’s original designer to ask what he thought of the new build: Jens Nygaard Knudsen, who created Lego Space and designed the original Lego minifigure, died in 2020 at the age of 78. But his long-time collaborator Niels Milan Pedersen says he sees a lot of Jens’ personality shining through — and if you want to know more about Jens and Niels’ work on Lego Space including prototype sets, I highly suggest this profile (pdf) by their colleague Mark Stafford.

When it comes to those early days of Lego Space, Pedersen remembers most were the guns — or lack thereof. Back then, designers had to pretend they were adding antennas to spacecraft: “We were not allowed to make anything like weapons of any kind, even though Jens fully realized the kids would use them as laser guns.” Pedersen wound up sculpting many, many iconic Lego parts over the years, but his first was the space camera. “Most people call it the space bazooka. We’re not allowed to call it that, that’s for sure!” he says with a laugh. 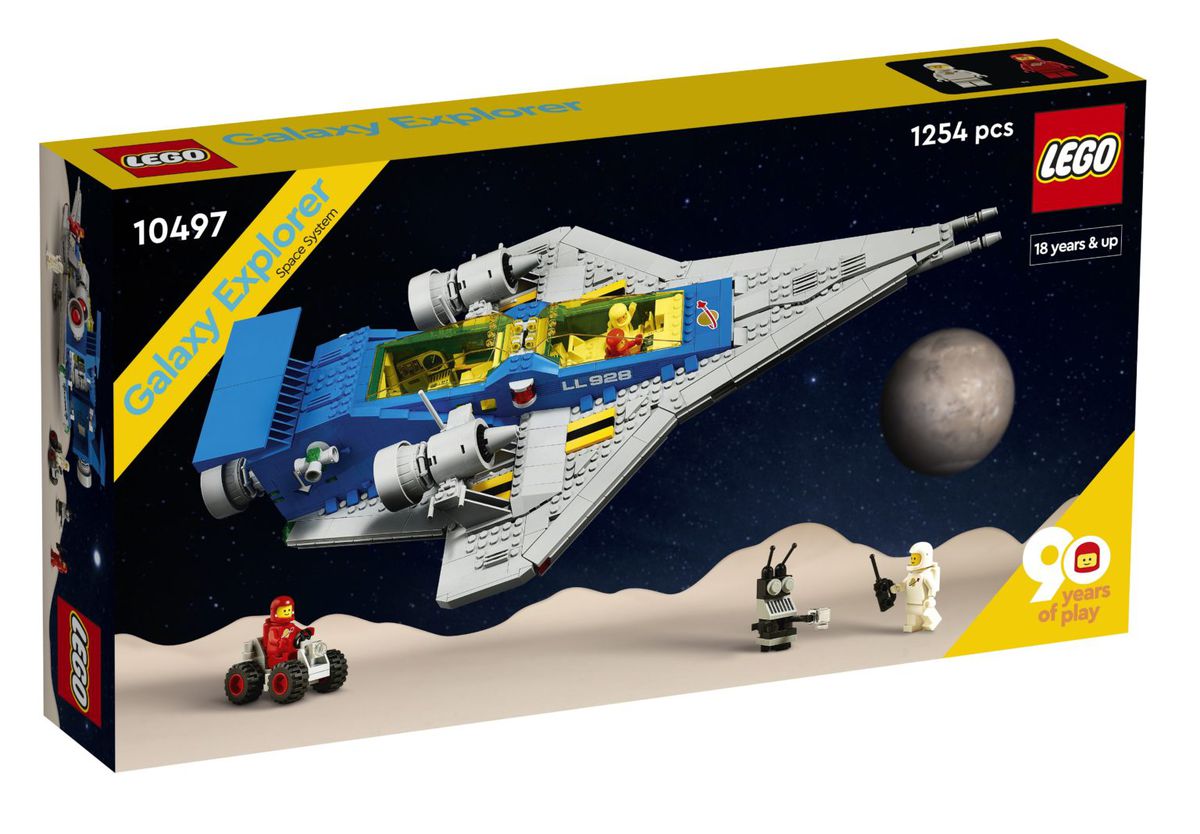 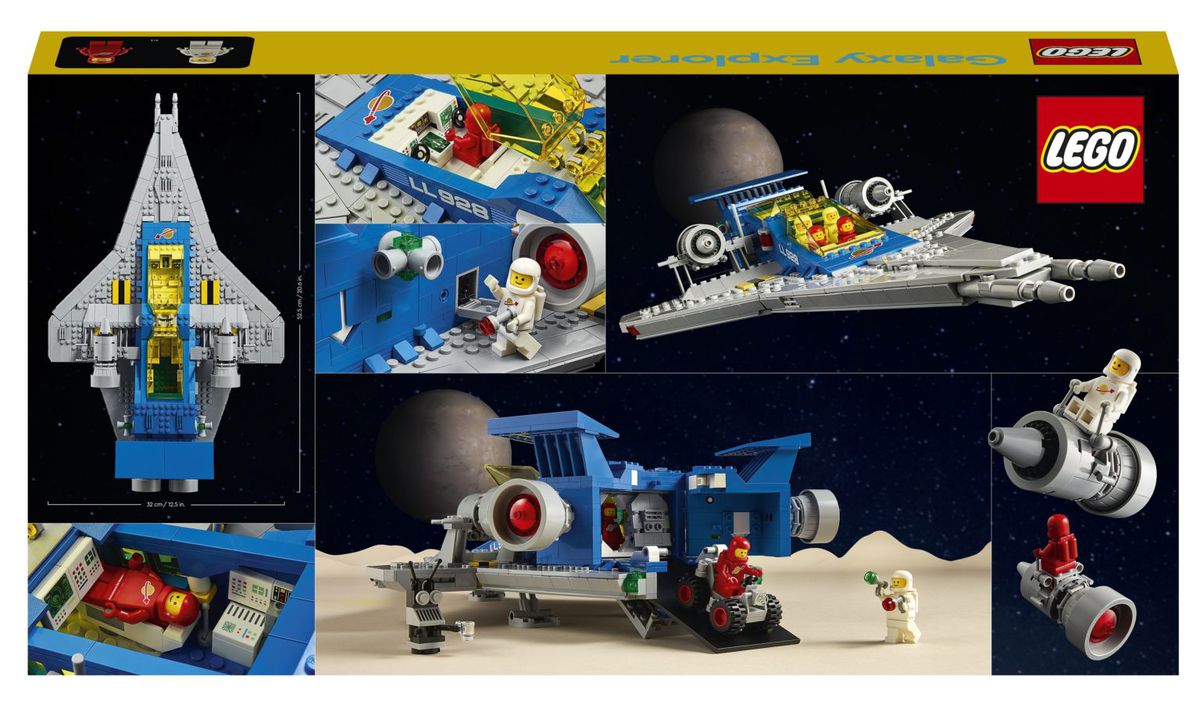 The Omicron subvariants BA.4 and BA.5 have together become dominant in the U.S., the C.D.C. estimates.