iOS 16.2 Expected to Launch in Mid-December With Several New Features

iOS 16.2, the next major update to the iOS 16 operating system, can be expected to launch in mid-December alongside iPadOS 16.2, reliable Bloomberg journalist Mark Gurman said today in his Power on newsletter outlining expectations for the remainder of 2022.

The first beta of iOS 16.2 and iPadOS 16.2 was released for developers and public beta testers last week, so it’s still early to outline all of its new features and changes. Still, we already have several new features, changes, and improvements to look forward to that we’ve recapped below.

iOS 16.2 will re-add Live Activities integration for select sports games for the built-in TV app on the iPhone. Users will be able to track games in real time using Live Activities on their Lock Screen or the Dynamic Island for iPhone 14 Pro models.

iOS 16.2 will add a new Sleep widget option for users to add their Lock Screen. There are three widget options: one showing the amount of time you spent in bed, another showing a bar chart representing sleep quality, and the larger widget that shows time in bed along with a visual representation. 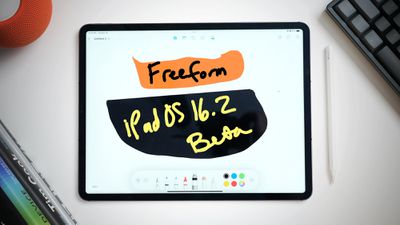 Announced at WWDC, Freeform is a new app from Apple that allows users to collaborate with friends and co-workers on a single board with drawings, text, videos, images, and more. Freeform is now available to developers and public beta testers and can be expected to launch alongside iOS 16.2, iPadOS 16.2, and macOS Ventura 13.1 in mid-December. Check out our hands-on video for a closer look at Freeform.

Since iOS 16.2 and iPadOS 16.2 are expected to launch in December, there is still plenty of time for Apple to add new features and changes for the update. After iOS 16.2 in mid-December, Apple is expected to launch iOS 16.3, iPadOS 16.3, and ‌macOS Ventura‌ 13.3 around February and March to coincide with new Mac releases, Gurman said today.