Apple has recently implemented several changes to the App Store that allow for outside payment options and linking to external websites for purchase purposes. As part of these changes, Apple in iOS 15.5 is adding support for and warnings about external purchases.

Code for external purchase support was discovered by 9to5Mac in the iOS 15.5 beta, which came out yesterday. The site says that iOS 15.5 “has full support” for the “External Link Account Entitlement” that Apple recently made available to reader apps.

As of last week, Apple began allowing developers of reader apps to sign up for access to an external link entitlement that will allow the app to offer a link to a website so users can create or manage an account outside of the ‌App Store‌. Reader apps include those that provide digital content like magazines, newspapers, books, audio, music, or video as the primary functionality of the app, with Spotify, Netflix, Hulu, and other apps serving as an example.

Apple decided to allow reader apps to offer a link to an external website to settle an investigation launched by the Japanese Fair Trade Commission in early 2021. Apple said that it plans to “make sure users of reader apps continue to have a safe experience on the ‌‌‌App Store‌‌‌,” and that it would help developers “protect users when they link to an external website to make purchases,” which explains some of the new wording in iOS 15.5.

“External purchases from ‘ExternalPurchase’ may still exist,” reads the pop up in the beta. “You cannot manage or cancel any external purchases through the ‌App Store‌. For more information, contact the developer.” 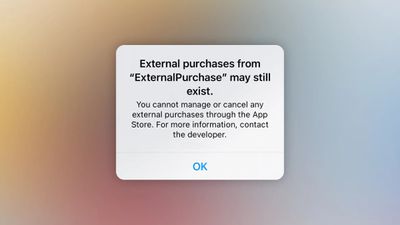 Apple’s guidelines for external links in reader apps are also designed to make a clear designation between the ‌App Store‌ and an external purchase. A link must open in a new browser window on the default browser for the device, for example, rather than in a web view in the app itself. As for protections, links cannot have tracking information or redirects in them, and an app can only link out to a website that it is affiliated with.

We don’t yet know when iOS 15.5 will be released, but Apple is accepting requests from reader apps that are interested in using the external link entitlement. Apple’s website for link entitlement says that the External Link Account API will be available for reader apps to build and test “in an upcoming beta release of iOS and iPadOS,” which appears to be iOS 15.5.