In this hallucinatory MMO, everyone’s a baby and nothing’s what it seems

I’m a baby and I can’t find the key to get into Daddy’s Room. There are no hints or clues as to where it might be, and the glaring red hell dimension around Daddy’s Room isn’t exactly baby-friendly. Looking to other baby players for guidance, I try to follow them to see what they’re doing. One leads me to a hidden room filled with blinding white light, and another—a menacing black ghoul-baby with hollow white eyes—mirthlessly watches me fall off the broken walkway to Daddy’s Room. Clearly there are no friends here. Only babies.

I’m playing Lets Go! Baby! Friends World, a shared-world multiplayer game that was made in just four days. Its proud parent is indie developer Feverdream Johnny, known for bizarro platformer Peeb’s Adventures and his lo-rez work with the Haunted PS1 community. The all-too-believable fiction of LGBFW is that it was once a thriving baby-themed social sim from 2001 that fell into obscurity and since “resurfaced in hobbyist circles”, according to its itch page.

For about five minutes, I almost believed it. Like Johnny’s other work, LGBFW is a crunchy, surreal world of PS1-style graphics. You can play it by yourself, but the true beauty of the game is in multiplayer mode.

Inspired by NeitherNathan and Ciscookiess’ Courage and ultra-weird bargain-bin games (often for the Nintendo DS), Johnny—a full-time college student studying digital media—started working on LGBFW as 2022 began. “I had heard that Socpens was hosting a Twitch event where chat members could appear in a virtual world as babies, and they would just wander around a dark room aimlessly until the New Year’s countdown finished, jumping around and making emotes the whole time,” he says. He roped in old memories of MMOs from his childhood—not the big MMO names you might think, but smaller, no-frills social chatroom-style experiences. He recalls a particularly obscure one where “everyone would just be a little jeep and you could derby in the desert for no discernible reason.”

In that same barebones spirit, Let’s Go Baby is quite possibly the most hostile user experience I’ve ever had with a game. And in a fiendish twist, its unfathomable nature also makes it (at least to me) one of the most deviously designed social game experiences ever created. “[Hostile user design] has always been a point of interest to me,” Johnny says of the completely opaque nature of LGBFW. “I’ve been tempted to make a game cluttered with status bars that have extremely oblique purposes.”

There are no no tutorials, no friendly NPCs to nudge you along the way. There is no in-game chat or any way to meaningfully communicate to other players. I spawn in a brick-walled courtyard littered with tombstones and make my way to a playground area with a roundabout and a statue of Johnathan, one of the preset baby skins. In the distance looms a “got milk?” billboard.

I can dance, crawl, and make sound effects by choosing different auras—auras allow me to interact with the world, although there’s a lot of trial and error in figuring out what to interact with, and with which aura (one YouTube streamer, for instance, theorized the Hollow and Tenebris auras were the most effective in his playthrough). “The only stat that you can increase over multiple playthroughs is a hidden ‘age’ stat that makes you taller over time, but that’s it,” reveals Johnny.

The true magic of LGBFW is its bizarre little existence as a quasi-ARG that requires a real community to unravel its mysteries. Via a couple of videos and itch.io comments, I discern that my purpose as a baby is to infiltrate Daddy’s Room, unlock Daddy’s console, and summon Daddy. At some point, I learn that I need to produce spectrograms to decode certain things.

Ultimately, and perhaps most importantly, there is no point to LGBFW besides doing something weird with other people and reveling in the weirdness of that collective experience. “I think the concept of creating a multiplayer game without a real endgoal always captivated me,” Johnny says. “Most multiplayer games at least have some purpose to them, like there’s a fundamental mechanic of it that you’d need other players for, but for a lot of these social MMOs the only thing other players could bring you was company.”

In a time when shared online experiences and overhyped metaverses are over-engineering boring ways to replicate the worst parts of real life, Let’s Go Baby, in all its arcane glory, achieves something really beautiful. There is almost no barrier to entry: it’s a free browser game, which means I can easily convince several friends to open a new tab and join me, even if it’s for a few minutes. 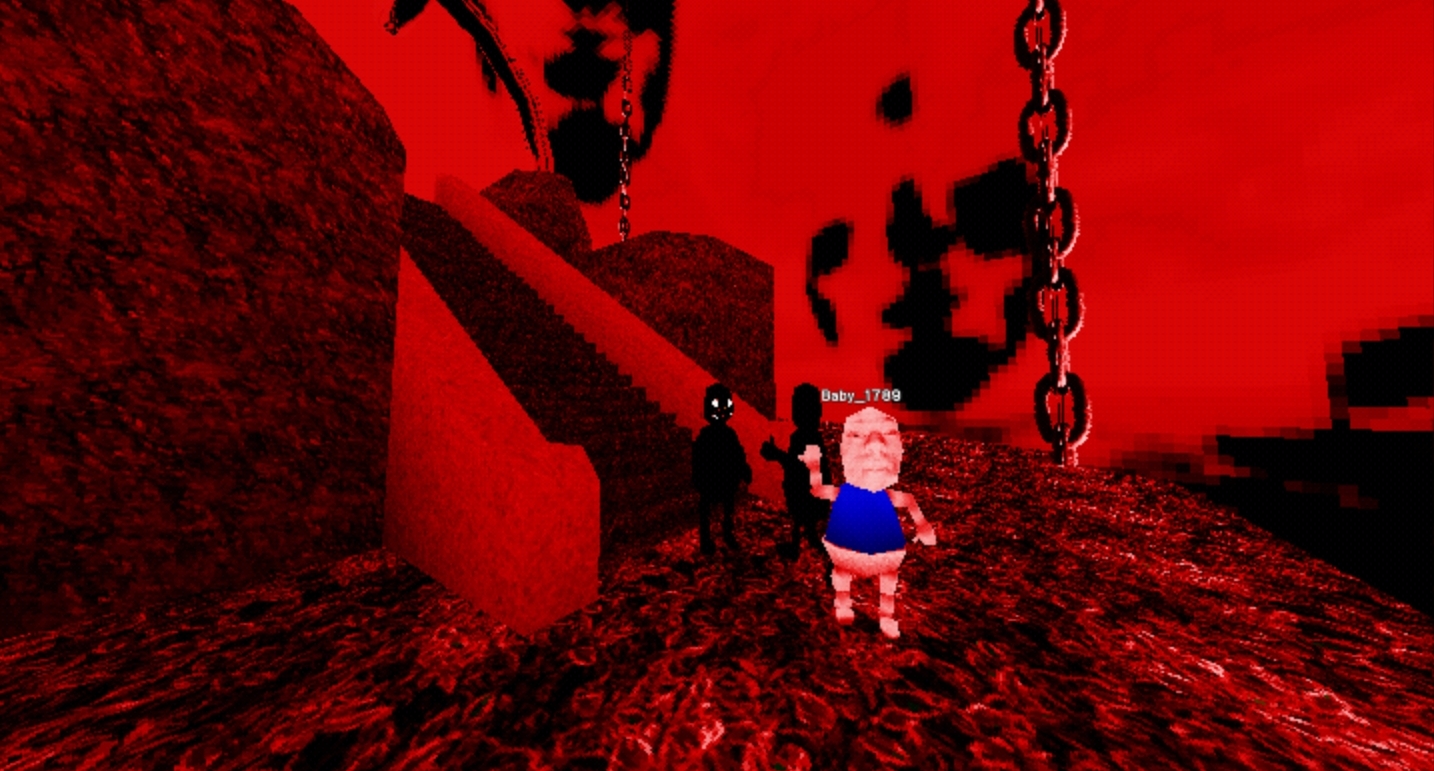 The server can hold up to 100 players: at its peak during the first week, there were 96 glorious babies online at once, and in a recent Patreon post-mortem, Johnny recorded a total of 15,000 demented babies passing through LGBFW’s hallowed grounds. While the initial wave of players came from Johnny’s network, he says that over time the players skewed younger, 12-year-old kids who just wanted to mess around with their friends.

“I’ve had to accept that because my games are deliberately goofy, they generally attract a younger audience who are going through their ‘lol teh random’ phase and want to share it with the world,” he says. “I remember receiving a review on Peeb Adventures where someone legitimately wrote ‘this game blow my childish mind!’ and I honestly can’t say if I’d have it any other way.”