How to get Cursed Corpse grenades in BGMI

The developers of Battlegrounds Mobile India, more popularly known as BGMI, have always come up with cool collaborations that players can look forward to.

From the Arcane collaboration featuring characters from the League of Legends universe to the recent Spider-Man theme game modes, Krafton has always strived to bring something new to the plate.

The latest collaboration was unveiled in February 2022 with the popular Japanese manga series Jujutsu Kaisen. The anime series is widely appreciated by anime fans all over the world.

A new game mode was unveiled on 15 February 2022, which is set to carry on until the upcoming update arrives in a few days. The collaboration also introduced new skins and outfits that players could acquire.

One of the quirky features introduced, and an interesting in-game item, is the Cursed Corpse grenade. Created by sorcerers, the Cursed Corpse is an inanimate object that has been cursed. The cursed energy allows them to stand up and gain self-control.

In Jujutsu Kaisen, these cursed objects were quite hostile to human beings. Taking inspiration from the series, the creators designed the Cursed Corpse grenade to be hostile to players.

Where can the Cursed Corpse grenade be found in BGMI? 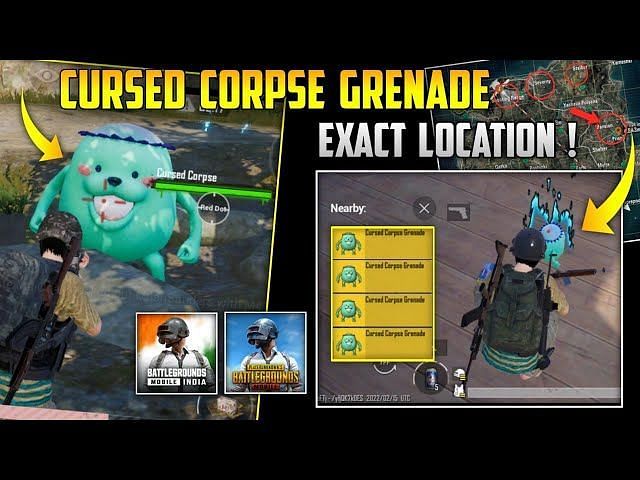 The grenades are strewn on two BGMI maps, Erangel and Livik (Classic mode). While looting popular spots, players can easily encounter these grenades inside buildings or sometimes even shelters.

Once the players deploy the grenade, Cathy boss is summoned. If players are not quick enough, this boss can reduce their health. Mobile gamers can defeat this boss and gain Level 3 loot.

If players cannot destroy it right away, they can run away from it. While high-tier loot is always an attraction, players must be careful when using the Cursed Corpse grenade as the activated bosses are marked on the map to attract opponents.

BGMI ban appeal and IT Ministry's response: All you need to know