GFX tools for BGMI are fake, here's why

Battlegrounds Mobile India (BGMI) has been a reason for the revival of the PUBG Mobile fanbase in the Indian region. The game has provided new content with consistent updates that have also been synchronized with the global variant (PUBG Mobile).

Thus, BGMI has been relatively successful even after PUBG Mobile’s eight to nine months of inactivity in the Indian region. However, alongside the rise of the Indian PUBG Mobile variant, an array of GFX tools for enhanced gameplay output have also resurfaced.

These GFX tools claim to tweak or optimize the in-game settings and provide a lag-free experience. Thus, such tools have attracted plenty of low-end users who download them to get a smoother experience in BGMI, but they can endanger users’ accounts.

BGMI GFX tools: Why they are fake, unauthorized, and employing them may lead to an in-game ban

Graphic effects (GFX) tools are usually third-party programs, and many have a presence in the application stores. They modify or interact with the game client.

However, their installation and use with Battlegrounds Mobile India doesn’t substantially affect gameplay, barring some differences in visual output, especially on lower-end smartphones.

However, even if GFX tools provide drastic results, users’ accounts may face a ban upon being detected by Krafton’s anti-cheating systems. The reason behind the ban is that if GFX tools are unauthorized, they interact with game clients, and their primary purpose is to cheat in the form of enhanced gameplay (visual) output. 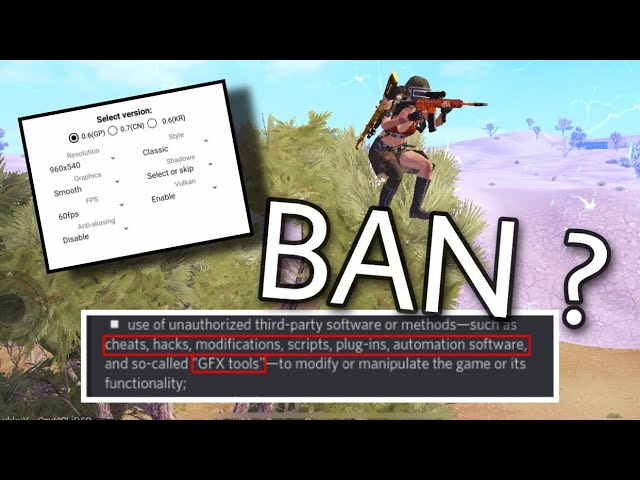 As per Krafton’s strict policy against cheating in Battlegrounds Mobile India, users’ accounts can receive a suspension after performing the following actions:

Gamers can ensure the safety of their in-game accounts by installing Battlegrounds Mobile India via the Google Play Store or Apple’s App Store. If users spot and install from any APK links from websites that feature unofficial or cracked BGMI applications, it can also lead to a ban on accounts.

Also Read
Article Continues below
Can GFX tools get you banned in BGMI?
BGMI Lite APK download links and files on internet are fake and do not work
COD Mobile: Is the GFX tool allowed to be used?

Hence, gamers must keep the gaming environment positive (anti-bullying) and hacking-free by avoiding anything like GFX tools alongside UC generators, mod APKs, teaming up with cheaters, etc. In addition to that, they should also report any suspicious entities.