Everything you need to know

While you can find our essential overview of the key talking points here, there’s a lot to dive into in much greater detail. Between an all-new CPU cluster arrangement, a ray tracing-capable GPU, high-end audio features and connectivity, and a deeper infusion of imaging and machine learning, the Snapdragon 8 Gen 2 sports a lot of firsts for Qualcomm.

See also: What is an SoC? Everything you need to know 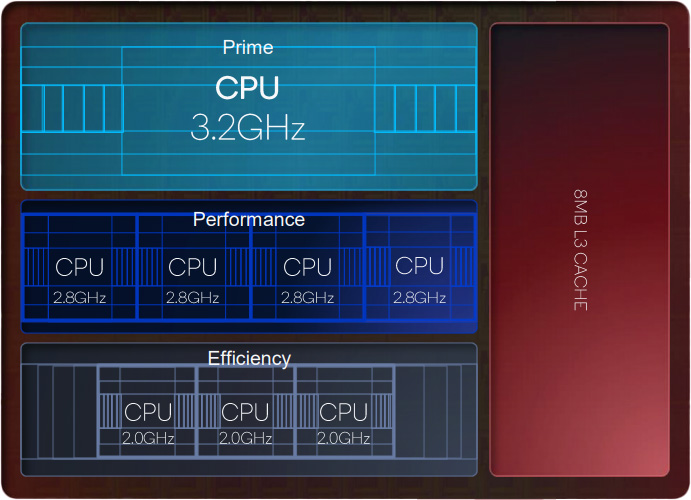 One of the instantly noticeable changes to the Snapdragon 8 Gen 2 is the move from the tried and tested 1+3+4 CPU cluster arrangement to a more novel 1+4+3 setup. In addition, Qualcomm has opted for two different CPU cores in the middle/performance cluster, based on two newer Arm Cortex-A715s and two last-gen Cortex-A710s. That’s bound to boost multi-core benchmarking scores, but it’s also clearly a very specific design choice.

According to Qualcomm, the reasoning came down to continuing support for legacy applications. The Cortex-A710 is the last of Arm’s cores to support 32-bit applications (AArch32) — all subsequent and future cores are 64-bit only (AAarch64), at least in theory. The Snapdragon 8 Gen 2 also uses Arm’s refreshed Cortex-A510 little cores, which, along with a 5% reduction in power consumption, can be built with 32-bit support as of 2022.

Ensuring legacy 32-bit support results in a unique CPU layout in the 8 Gen 2.

Qualcomm wasn’t crystal clear when we asked about AArch32 support in the A510s, but its answer leads us to believe that only the two A710 cores have 32-bit support for legacy applications. That isn’t necessarily ideal from a performance or efficiency standpoint, but compromises had to be made somewhere, and it makes sense to hit legacy rather than current apps. Even so, 32-bit support could be redundant for many Snapdragon users and could even be a poor trade-off when you consider the loss of one little efficiency core. However, Qualcomm claims to have further optimized the performance cores to mitigate the issue.

See, Google has mandated 64-bit application support for years already. Any app updated on the Play Store in recent years is now 64-bit. Even so, including the A710 cores ensures that the Snapdragon 8 Gen 2 will work with older applications and those that fall outside of Google’s Android ecosystem. Think China or third-party app stores that are further behind in mandating 64-bit support.

An extra middle core will boost multi-core workloads, but what about low power use cases?

A powerhouse Arm Cortex-X3 rounds out the CPU clusters, providing a decent chunk of the claimed 35% performance improvement, along with the extra middle core. When it comes to efficiency, Qualcomm claims up to a 40% improvement overall. The bulk of this comes from the move to TSMC’s 4nm process (Qualcomm wouldn’t confirm if it is using TSMC’s N4 or newer N4P process, so we’re presuming the former), but it’s still an impressive figure given the loss of one efficiency core. We saw similar benefits when Qualcomm moved from Samsung to TSMC for the Snapdragon 8 Plus Gen 1.

The table above provides an overview of the CPU setup, at least as far as Qualcomm would confirm to us. We don’t have full cache info, which could have performance implications for the middle and efficiency cores. Still, Qualcomm has provided a larger shared L3 cache, now 8MB up from 6MB, which will play a role in maximizing performance in heavily multi-threaded workloads with the additional middle core.

We’ll have to wait for smartphones in hand to see how this shakes out, but some interesting choices have been made here. 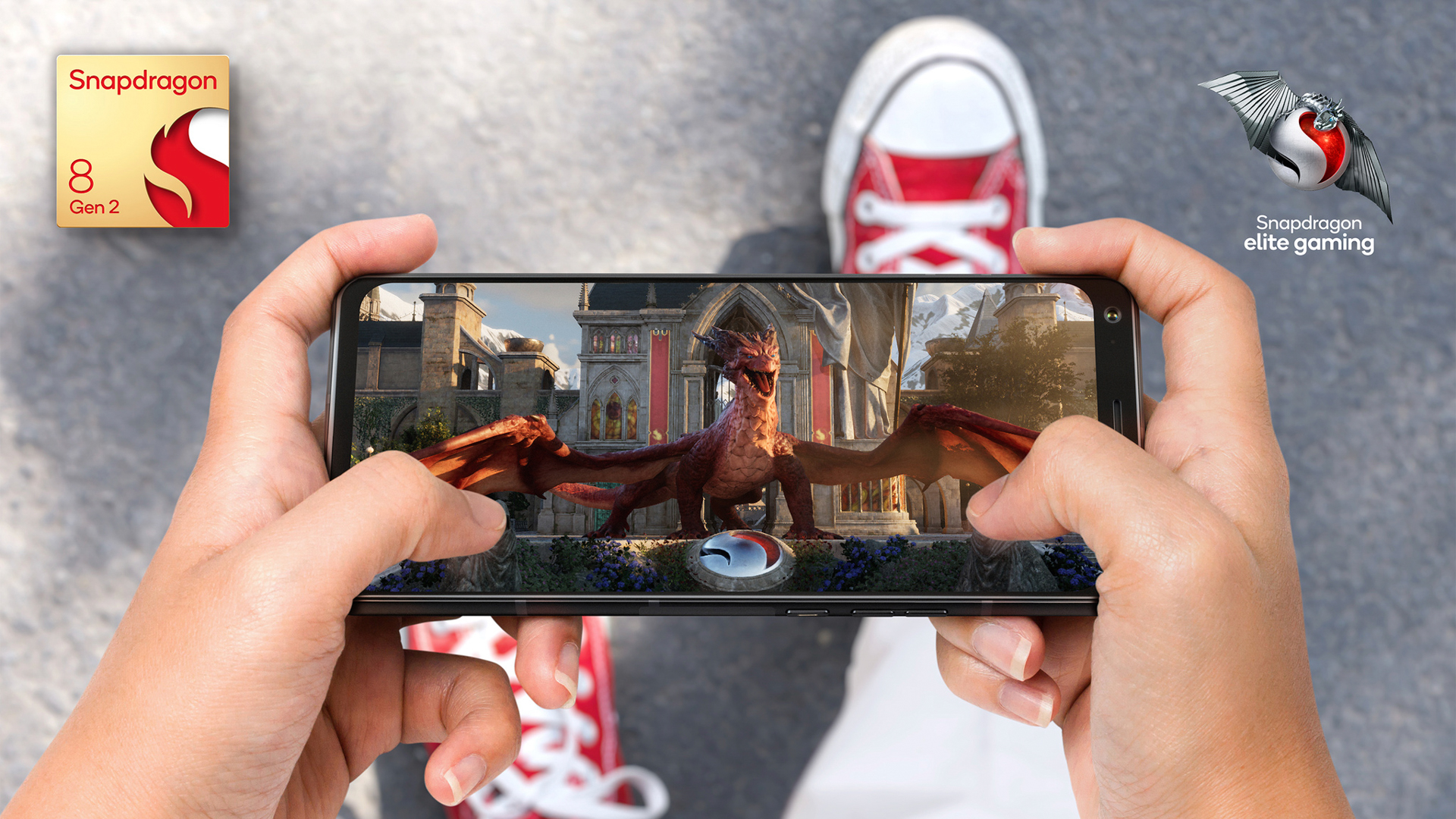 Developers can leverage ray tracing to build soft shadows, reflections, and global illumination into the games.

According to Qualcomm partner Oppo, which is bringing the 8 Gen 2 to its next Find X flagship, the company’s open-sourced PhysRay engine is able to increase ray tracing rendering efficiency by a factor of 5x and reduce CPU workloads by 90% compared with running the same effects in software. The company claims a locked 60fps at 720p for 30 minutes, running its ray tracing engine on the 8 Gen 2. 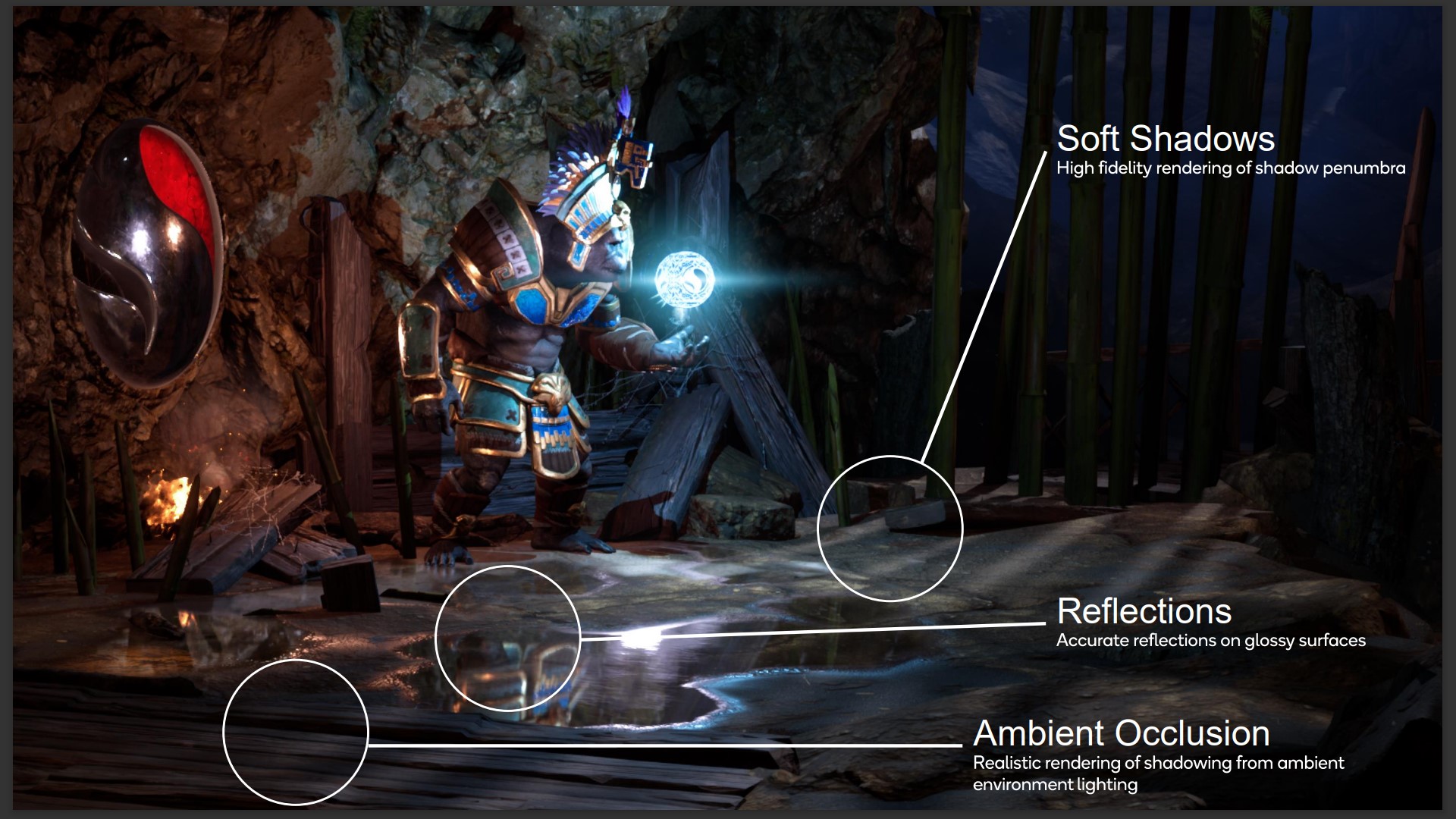 Nevertheless, the GPU now accelerates the rendering of soft shadows, reflections, ambient occlusion, and global illumination in ray tracing-capable Vulkan Android games in ways that can’t be done in software, according to Qualcomm. So games should look that bit nicer in the years to come. Speaking of, Qualcomm sees hardware-accelerated ray tracing arriving in the AAA games in the first half of 2023.

The first mobile game with ray tracing support is expected in H1 2023.

In addition to ray tracing support, the latest, nameless Adreno GPU (we’re betting on Adreno 740 internally) promises 25% more performance and up to 45% power savings over the previous generation, depending on the use case. It supports the Vulkan 1.3 API, and Qualcomm has optimized its drivers to provide a further 30% performance improvement in some Vulkan-powered scenarios. Qualcomm is also the first to claim support for Unreal Engine 5’s Metahumans framework, while its Adreno Display engine boasts Adaptive HDR, HDR Vivid, HDR10+, Dolby Vision, and OLED Aging Compensation features. This all sounds like a big win for Snapdragon gamers this year.

Extra AI for imaging and more 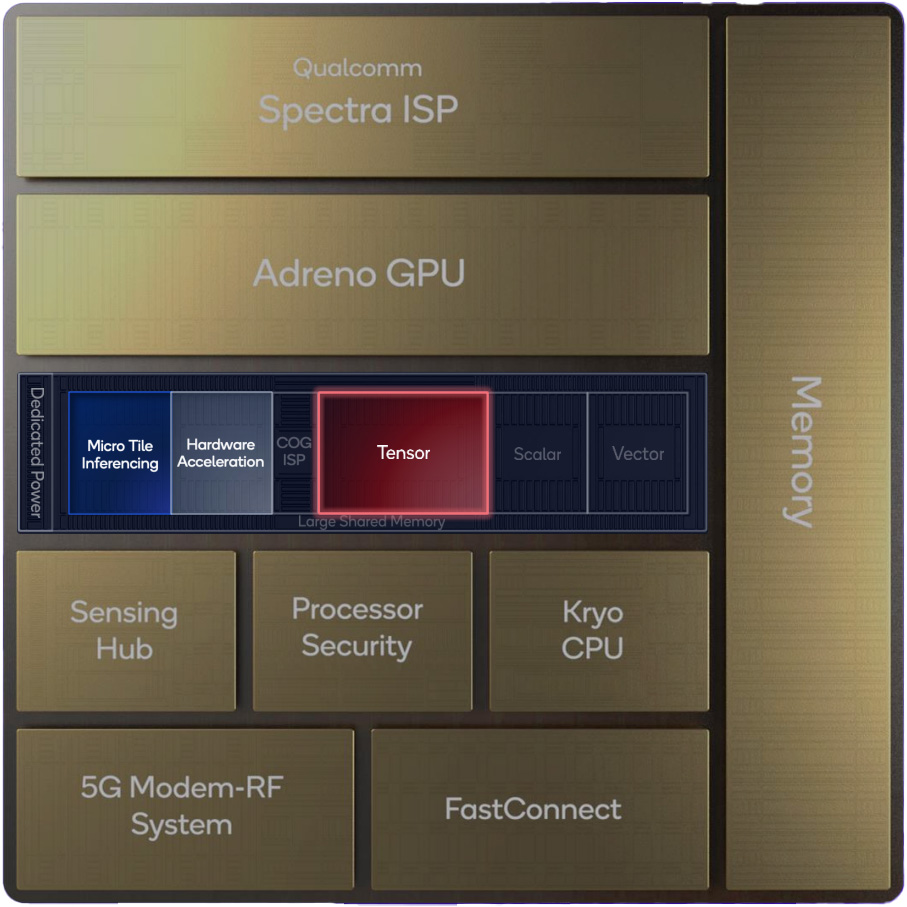 Qualcomm has been pretty hot on imaging capabilities in previous years and, although not touting huge numbers for us to ogle at this time, does have some crucial improvements here too. Before getting to the imaging smarts, let’s dive into what’s new with Qualcomm’s latest Hexagon DSP, the heart of the Snapdragon 8 Gen 2’s system-wide AI Engine.

A few seemingly small improvements add up to quite a lot. For starters, there’s now a dedicated power delivery system, meaning that the Hexagon DSP can run without having to clock other components simultaneously, such as the GPU. A unique power domain is a win for efficiency. In that vein, Qualcomm claims a 60% improvement in performance per watt over the previous generation when running certain AI models.

To boost performance, the Tensor accelerator inside the DSP has doubled in size for twice the performance and has new optimizations specifically for language processing. Qualcomm is also debuting what it calls micro tile inference support, essentially chopping up imaging and other problems into smaller tiles to save on memory at the expense of some result accuracy. Along those lines, the addition of INT4 also means that developers can now implement machine learning problems requiring high bandwidth at the expense of some accuracy if compressing a larger model. Qualcomm is providing tools to partners to help support INT4, so it will require a retooling of existing applications to work.

Altogether, the Snapdragon 8 Gen 2 Hexagon DSP offers 4.35x the performance of its predecessor, depending on the ML model. (In this case, Qualcomm is comparing mobileBERT natural language processing). Sounds impressive, but I think the more significant change is the introduction of Hexagon Direct Link, which more closely connects its ISP to the AI Engine. The company dubs this its “Cognitive ISP.” 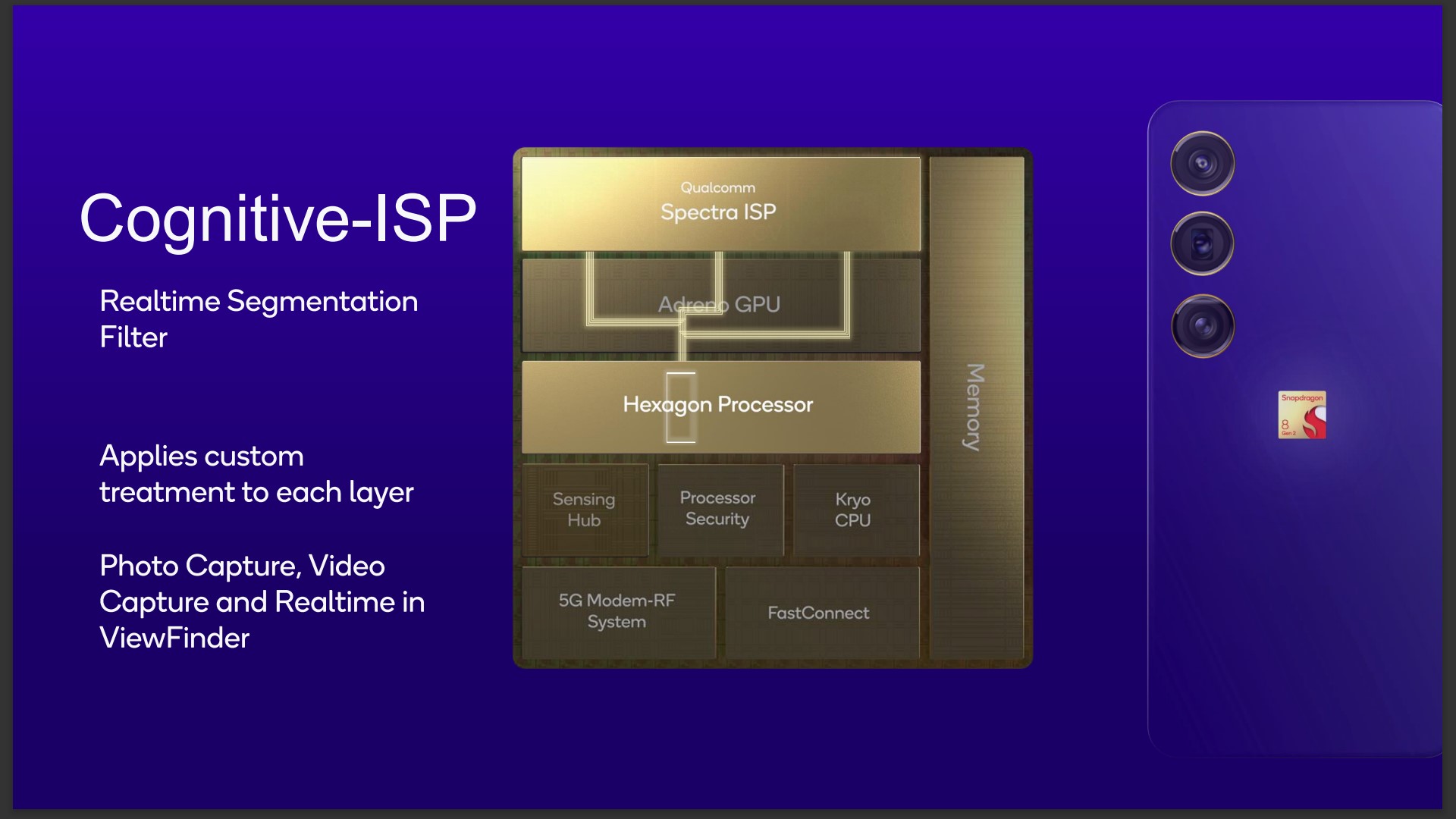 Qualcomm doubled the physical link between the image signal processor (ISP), Hexagon DSP, and Adreno GPU, driving higher bandwidth and lowering latency. This allows the Snapdragon 8 Gen 2 to run much more powerful machine-learning tasks on imaging data right off the camera sensor. RAW data, for instance, can be passed directly to the DSP/AI Engine for imaging workloads, or Qualcomm can use the link to upscale low-res gaming scenarios to assist with GPU load balancing.

Qualcomm’s prime use case for Hexagon Direct Link is for image segmentation and processing. In other words, identifying key aspects of a scene, such as facial landmarks, plants, the sky, etc., to create layers in real-time and then apply custom processing to these layers before even hitting the shutter button.

If this sounds somewhat familiar, it’s because Qualcomm has been moving various machine learning-type features closer to the ISP in previous years, including face detection and segmentation for video bokeh capabilities. It certainly claimed segmentation capabilities last-gen. However, the slower link meant that imaging data was previously often pulled into main memory first, a costly and high-latency procedure that usually resulted in applying segmentation after capture. Qualcomm is reducing that bottleneck this year, making it much more feasible to run complex workloads, such as imaging problems, on its AI Engine in real time. Although whether Qualcomm’s product partners leverage these capabilities remains to be seen. 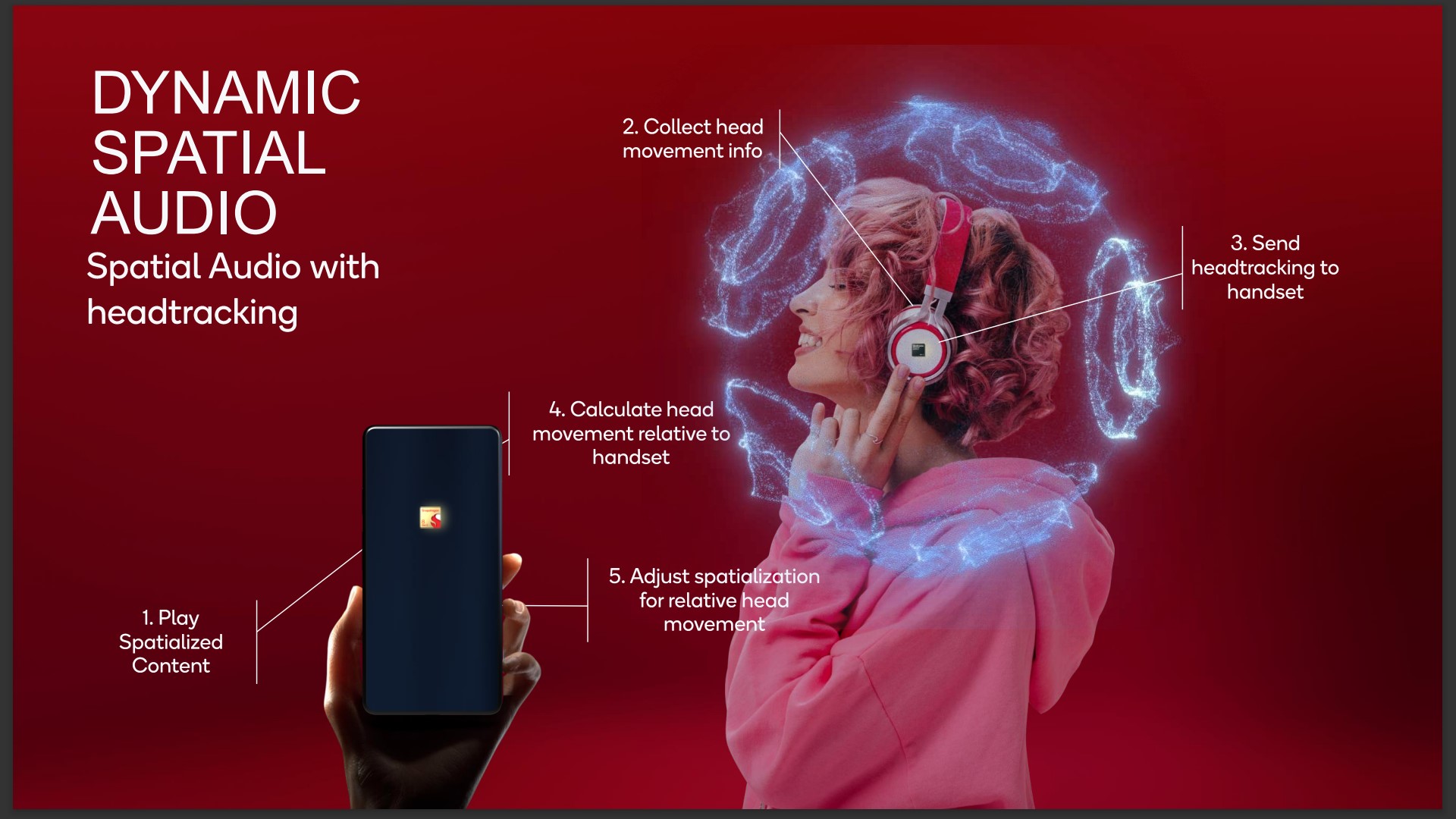 Let’s start with the more exciting, user-defining new connectivity features. The chip’s updated Snapdragon Sound audio suite now includes Dynamic Spatial Audio capabilities. By dynamic, Qualcomm means you can now move your head around within the space and hear the content move around you rather than following your head statically, thanks to dynamic head tracking on compatible headphones. This technology works with most existing multi-channel spatial audio formats and decoders, such as Dolby Atmos and Sony 360 Reality Audio.

Sticking with audio, Qualcomm’s aptX Lossless codec is now supported in both Bluetooth Classic and LE Audio use cases, combining the benefits of low energy and lossless audio playback for future products. For gamers, wireless latency can fall to just 48ms with a compatible headset — that’s 47% lower than its predecessor.

If you thought the dust had settled on 5G, think again. Qualcomm is shaking a few things up with the Snapdragon 8 Gen 2. Built with an integrated Snapdragon X70 modem, which offers speeds of 10Gbps down and 3.5Gbps up via 4x carrier aggregation, there are AI smarts onboard too.

Qualcomm claims that the modem’s AI capabilities allow it to improve the throughput and connectivity robustness of both sub-6GHz and mmWave connections, particularly at the cell edge. Perhaps more practical, though, is support for dual active 5G SIMs. So you can continue to receive messages and data on a secondary 5G SIM while taking a call on the first.

Qualcomm rounds out its latest Snapdragon Connect suite with early support for Wi-Fi 7, as well as Wi-Fi 6 and 6E. Although the spec isn’t finalized, Qualcomm is leveraging its inside track to support the standard early. The promise is up to 5.8Gbps data speeds over a 320MHz channel in the 6GHz band via High Band Simultaneous Multi-Link. This comes with a latency of just 2ms, which Qualcomm says will be invaluable in supporting cloud gaming, XR, and other latency-dependent applications. Of course, you’ll need a Wi-Fi 7 router to benefit, but those are only on sale in China at the time of writing. One to slap on the futureproof items list, then.

Sifting through the launch presentations and press materials, here are a few other Snapdragon 8 Gen 2 features worth highlighting:

Which smartphones include the Snapdragon 8 Gen 2? 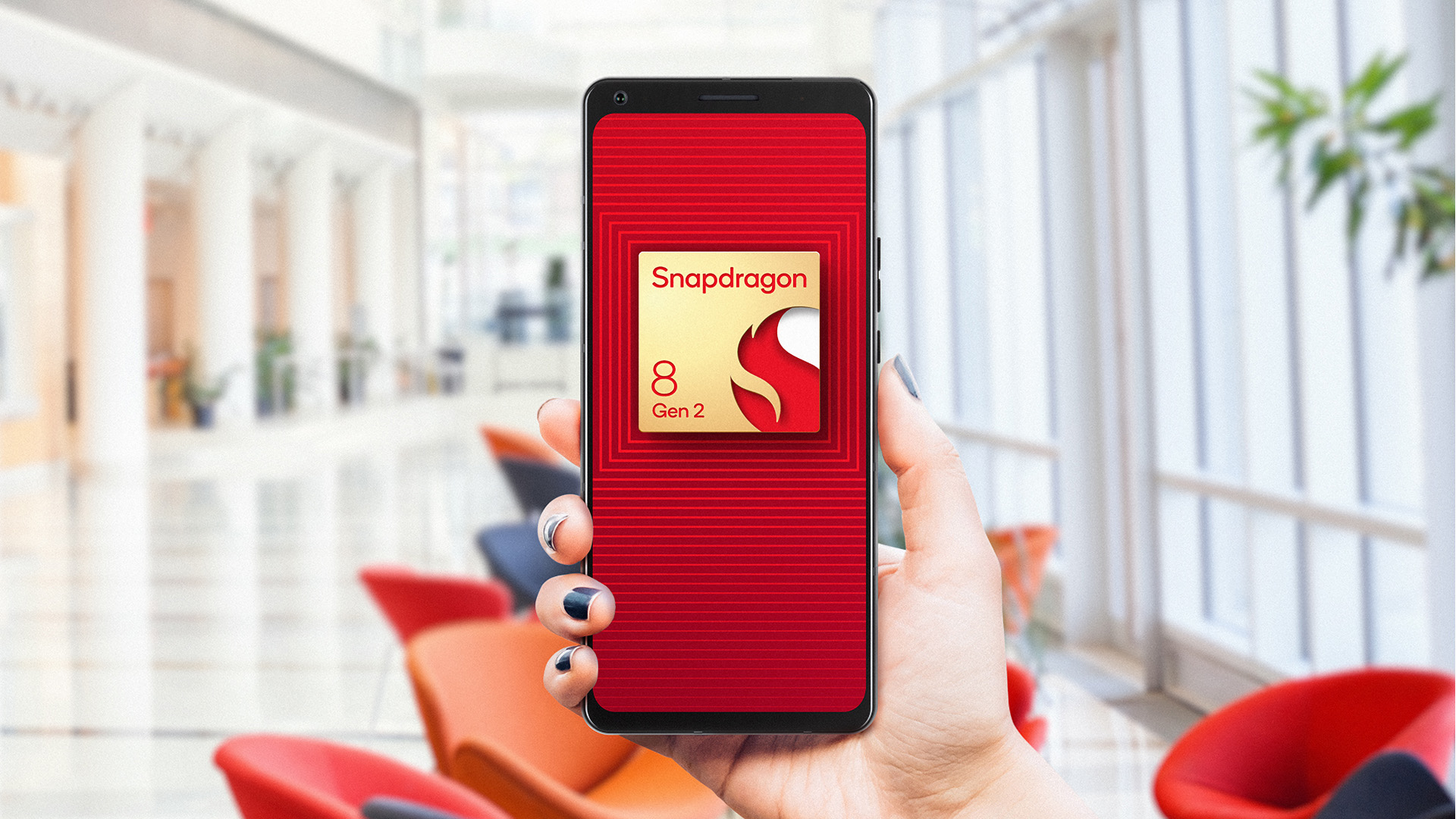 With the SoC announcement only just hot off the press, we likely won’t see the first smartphones in most consumers’ hands until 2023 — though Qualcomm notes we may see a commercial release before the end of 2022.