Cult of Lamb Review: Baa thou not afraid

I’m putting Cult of the Lamb on my game of the year shelf right next to Elden Ring. The dark yet cutesy cult simulator roguelike mixes the best parts of Animal Crossing with all the fun of a dungeon-crawling murder fest. The unique way the game combines these two disparate elements makes it more than worthy of claiming a spot on 2022’s game of the year list.

Cult of the Lamb starts with the titular lamb being offered up as a sacrifice to sate the hunger of a handful of eldritch gods that look like the parasites that probably live between the folds of Lord Cthulhu’s tentacles. As you tremble and cry, you’re saved at the last minute by another, eldritch-ier looking god who promises you power if you do their bidding and kill the gods who are trying to eat you. Free and with great and terrible power, you recruit members to your cult and use the power of their faith to grow strong enough to kill the four gods.

Being a god is hard. There are so many prayers to answer and needs to satisfy.

At the start of the game, you’re given a base, and it’s your job to populate it with as many followers as you can. It’s not enough for them that you can levitate in the air with blood pouring from your eyes, shouting, “Be not afraid.” No. Your followers are a needy bunch, requiring a whole host of other creature comforts that you and only you can fulfill.

Every action you take, whether it’s making food for your followers or cleaning up after them when they shit or puke everywhere, increases their faith in you. If you neglect these needs, your followers will grow angry and start preaching heresy.

I loved this part of the game. I got so much joy out of meeting those cute little woodland creatures’ needs. As a god, you can take two different roads with your followers. You can do your best to make them happy, or you can suck them dry of faith and toss away their withered husks. Since I am incapable of making the mean choice in any game, I was the chill and benevolent god. 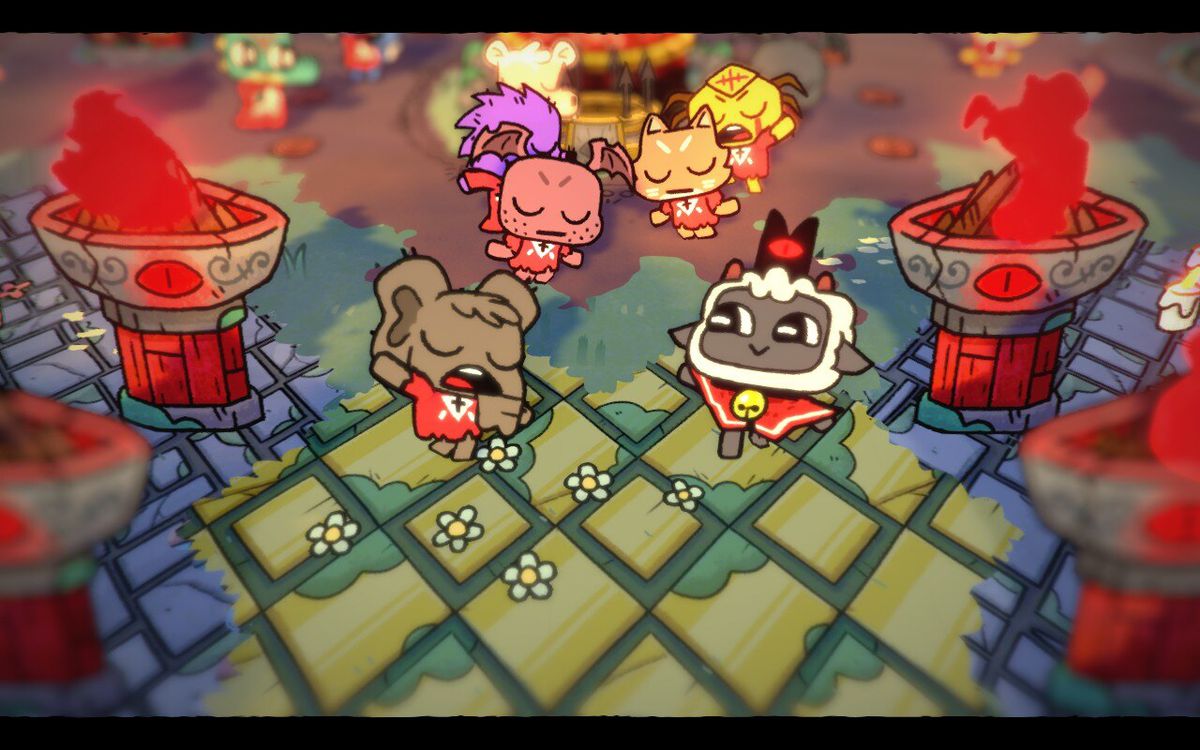 Performing mini-rituals with your followers increases their faith in you.Image: Massive Monster

I kept my followers fed and happy. I never sacrificed anyone (on purpose, at least — there were some… accidents), and I took pride that most of my followers that died did so happy, full, and at a venerable age.

The follower / base-building portion of the game was so appealing. I hated being away a-crusadin’ for the Lord (more on that in a minute) because I knew my people would be starving and angry when I got back. I really got into it, roleplaying as I would if I had the opportunity to be a god. When you recruit a new follower, you can change their name and appearance. But I felt that was a little too on the nose for elements of Evangelical Christianity. My religion was truly “come as you are,” and that made me feel good, like I was truly upholding some kind of core belief that I feel real religion tries and fails to be.

You can make your followers harvest the resources you need to construct more buildings and decorations. For the longest time, I plopped my buildings wherever I had space, unconcerned with layout and aesthetics. My camp was initially a haphazard mess, and I thought, since I had found no way to change the layout, that there was no point in being artistic. But then I discovered the “move building” button, and I cursed aloud, “Oh shit!” — as in, “Oh shit. My life is over. I’m about to lose so much time crafting the perfect base.”

I never sacrificed anyone on purpose, at least

I wish I had pictures of my base before, but trust me, it was an unstructured mess. But look at this: 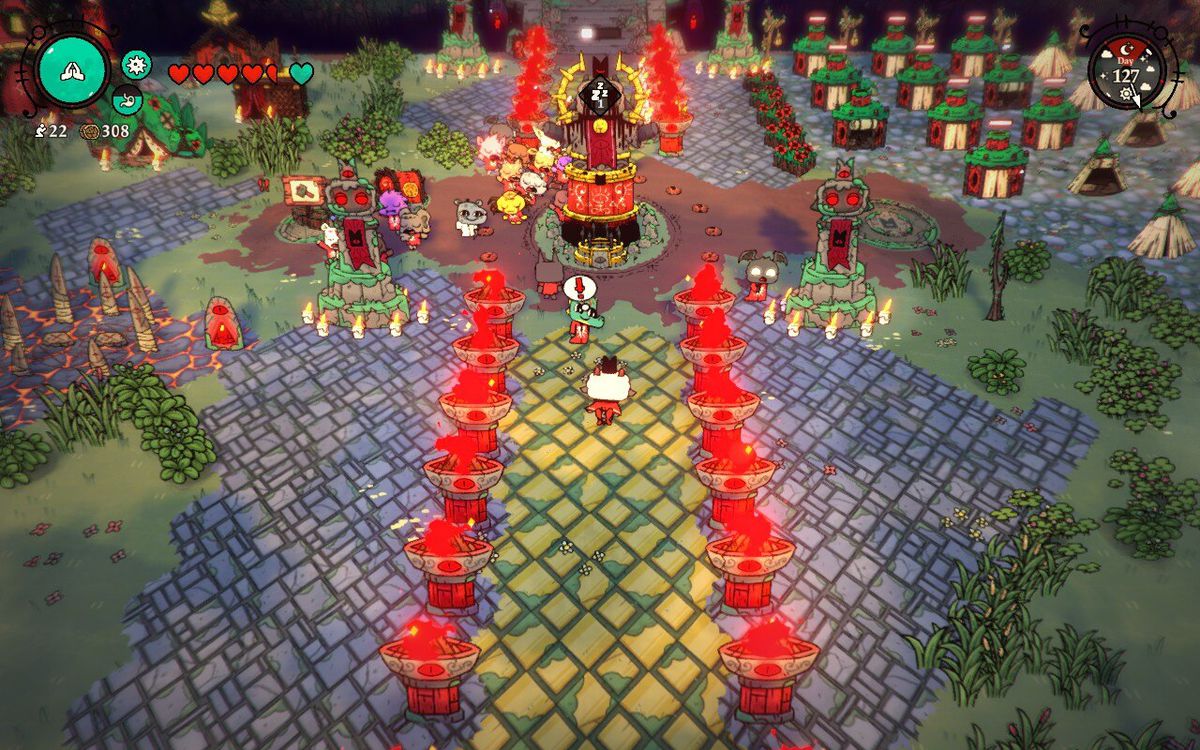 Isn’t this the most perfect city of god you’ve ever seen?

The other half of Cult of the Lamb is a roguelike. There are four dungeons, each with three mini-bosses and an endboss representing the four gods who tried to sacrifice you. At the start of each run, you’re given a weapon and a spell, and as you progress through the randomly generated dungeons, you pick up new followers, building materials, and tarot cards that enhance your abilities.

While combat is not as engrossing as all the social elements of the game, I found it to be no less fun. The weapons and spells are varied enough to make each run unique, and further augmentation by tarot cards and special fleeces you earn later in the game made it fun to mix and match until I found the combination that felt right for me.

Boss fights can get a little tedious with their occasional bullet hell attacks, but I otherwise enjoyed every dungeon run. The game even encourages you to return to dungeons you’ve cleared to fight tougher monsters for greater rewards.

I’m about to lose so much time crafting the perfect base.

Cult of the Lamb leverages its two systems to create a gameplay loop that was easy to fall into and never felt tedious. I would spend time with my cult, performing rituals, accepting quests, marrying, burying, and recruiting followers, then setting them to tasks about the camp. Then when my materials were exhausted, I would make a quick trip to one of the dungeons with the ultimate goal of beating the boss but being satisfied with gaining whatever new materials I needed or tarot cards I had yet to collect. Repeat ad infinitum, and friend, it was very easy to repeat ad infinitum. 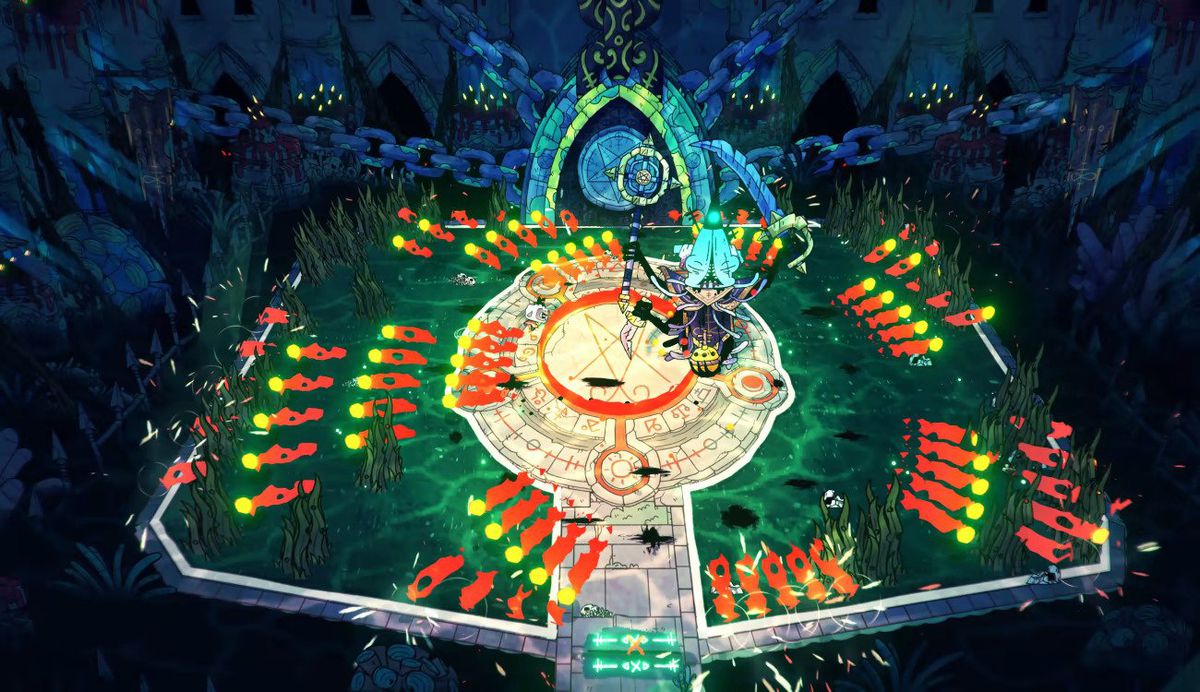 And the rare occasions when I got bored crusading and crafting? Then I’d fish or challenge followers to a game of knucklebones. All the little things stuffed into this game seem to be done with laser-focused precision. I don’t like games within games (I’m looking at you, Machine Strike), but neither fishing nor knucklebones felt overwhelming or like an ad hoc system meant to pad the runtime.

Cult of the Lamb became a comforting, soothing experience inasmuch as cleaning up vomit and poop and beating down Cthulhuian horrors can be soothing. It was my bedtime game. I’d play until my eyes couldn’t stay open anymore or my Steam Deck’s battery gave out, whichever came first. And because I enjoyed playing so much, crafting the perfect combat loadout or redesigning my camp’s layout, it was largely the latter. I hate that the game is so short and how easy it is to max out everything. Unlocking the highest tiers of buildings and power-ups became trivial since I became efficient at extracting devotion from my followers. To contradict Machiavelli, it’s better, in this case, to be loved rather than feared.

To contradict Machiavelli, it’s better, in this case, to be loved rather than feared

In speaking with the developers at Massive Monster, they alluded to content updates in the future, potentially adding more gods to slay, dungeons to crawl, and golden calves to craft and worship. They told me they hope to continue to support Cult of the Lamb for as long as people enjoy playing it. And with the news that the game, barely out of its first month, has already amassed 1 million players, it’s pretty clear that the Lamb indeed has its cult.

Cult of the Lamb is out now on Xbox, PlayStation, PC, and Nintendo Switch.