During the frigid Canadian winters, the forest behind my house became a battlefield. Every night I’d meet my friends there and distribute our collection of toy guns and then we’d re-enact the scenes we had seen in war movies. I vividly remember sitting in the snow, back against a tree, pretending I was pinned down by my friend who was now a German sniper. I was ten years old and blessed with an absurdly active imagination. Immersion was everything, so crawling for an hour through freezing slush just to get to safety was not out of the question.

This was just one of the ways my childlike fascination with war manifested itself. Between gory drawings of battlefields or watching what few WWII documentaries I was allowed to see, 10-year-old me was obsessed with the thrill and glory of battle. Naturally, that troubled the hell out of my parents, who knew that war wasn’t glamorous or cool. But despite them trying to tell me otherwise, that realisation only hit me the first time I booted up Close Combat on our family PC. This real-time strategy game was unlike any other I’d played, and it quickly taught me that war is a lot more horrifying than my kid brain could comprehend.

Reinstalling Close Combat 5 today, it’s funny that I initially found its low-res battlefields so harrowing. But even if its graphics haven’t aged well, there’s still something unique and innovative about one of PC gaming’s forgotten real-time strategy games.

Unlike most strategy games of the late ’90s and early ’00s, Close Combat goes to great lengths to simulate WWII-era combat. There are no bases to build or resources to harvest, just dozens of platoons to manage as they slowly crawl across war-torn Europe, engaging in intense firefights. Years of Command & Conquer had taught me that my units were easily replaceable—clones endlessly churned out of a factory or barracks tucked into some corner of the map. So, like an idiot, my first move was to select my entire army and move them straight into the centre of the town we were fighting in to take one of the map’s many capture points. No other RTS had required me to carefully position my units, so I was completely unprepared for Close Combat’s more simulated approach.

Units won’t just blindly follow orders like in Command & Conquer, but will also consider the context of that order.

When German assault squadrons opened fire, I realised my mistake. Amid sharp cracks of gunfire and horrifying screams, individual soldiers were cut down by the dozen. Those that survived quickly panicked and began to retreat while others just huddled on the spot—the UI readout telling me they’re ‘cowered’ or ‘pinned’—waiting for their turn to catch a bullet. The firing soon ceased and ten-year-old me stared blankly at the bloody corpses of several dozen dead soldiers. I had sent them all into the meat grinder and those that survived were now too broken to fight.

This remains Close Combat’s best and most interesting feature. Units won’t just blindly follow orders like in Command & Conquer, but will also consider the context of that order. Command a squad to charge a fortified enemy position and they’ll probably just tell you to get stuffed and sit right where they are, bursting with morale. Or if I order a squad to bail out of a house currently being shelled, there’s a good chance some soldiers might be too shell-shocked to follow their comrades. Squads can even become separated in these situations, further adding to the realism and chaos of war. 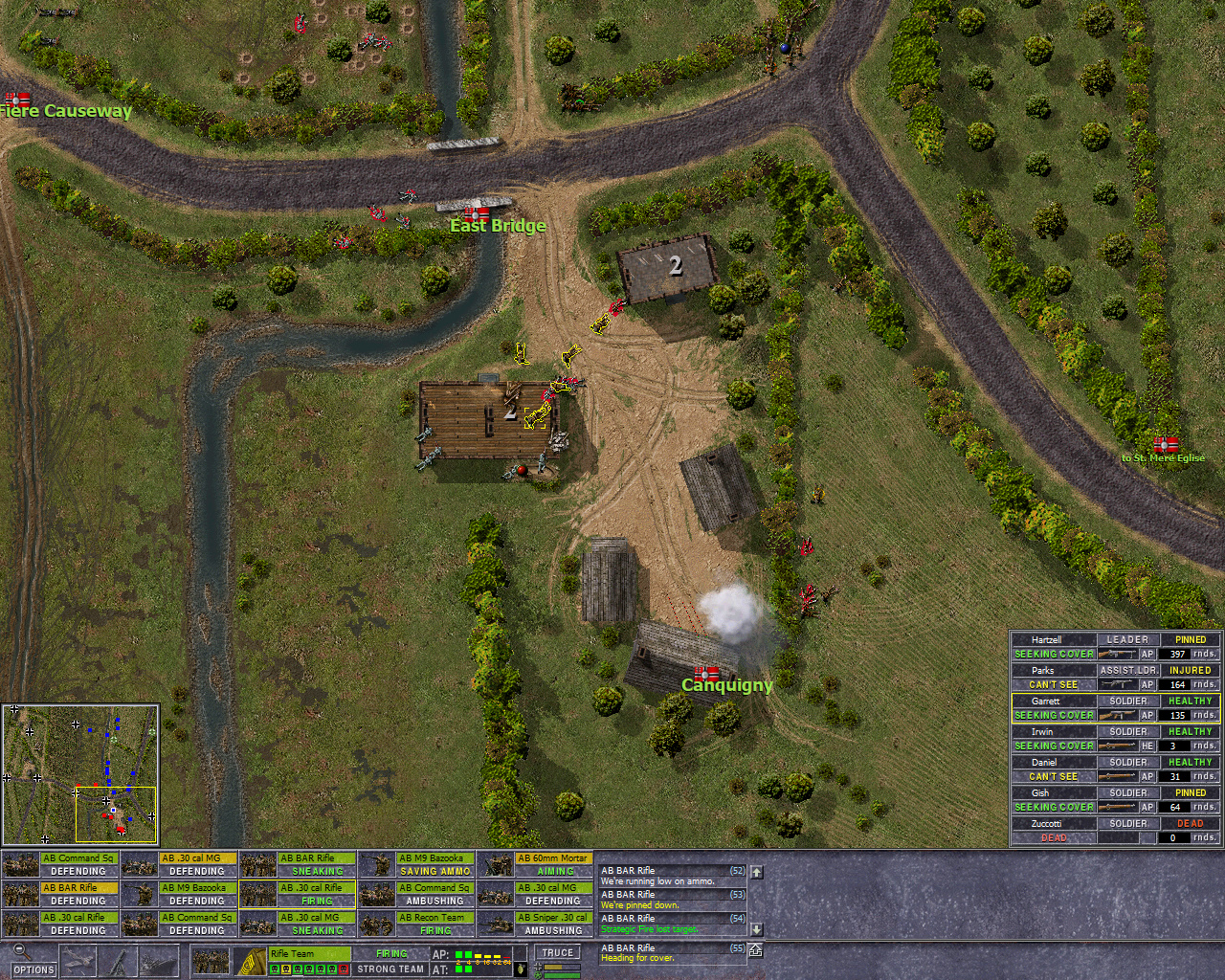 All this depth was mind-blowing to ten-year-old me, and today it still feels remarkably innovative. Instead of health being a binary state between alive and dead, my squadrons feel like they are made of real people. People who can become scared and flee combat, or can become wounded and spend the rest of the battle squirming in a pool of their own blood among deceased comrades. That the game gives each soldier a name helps sell that these are more than resources to be expended in pursuit of conquest, and helps me track the survival of individual soldiers across a campaign.

It’s a small (and somewhat morbid) touch, but I also love that corpses remain on the battlefield. A lot of RTSes from that era despawn bodies in order to keep the map readable, but that makes battles feel ephemeral. In Close Combat 5, however, the story of iconic battles like Carentan is written by the clumps of dead soldiers that choke the streets after a fight.

That said, Close Combat 5 doesn’t feel nearly as provocative as it did to me as a kid, being the little war worshipper that I was. There’s still a visceral feel to its violence, but it wasn’t long until I started hearing the same few screams repeated as more soldiers died. And while I’m genuinely shocked that the game even runs on modern hardware—at 1440p no less (it is letterboxed, however)—the graphics have definitely aged poorly. The static, pre-rendered maps do a great job of bringing to life the pastoral fields of Normandy, but individual units are too small and lack detail. It somewhat counters the intimacy afforded by Close Combat 5’s deep simulation of individual soldiers. 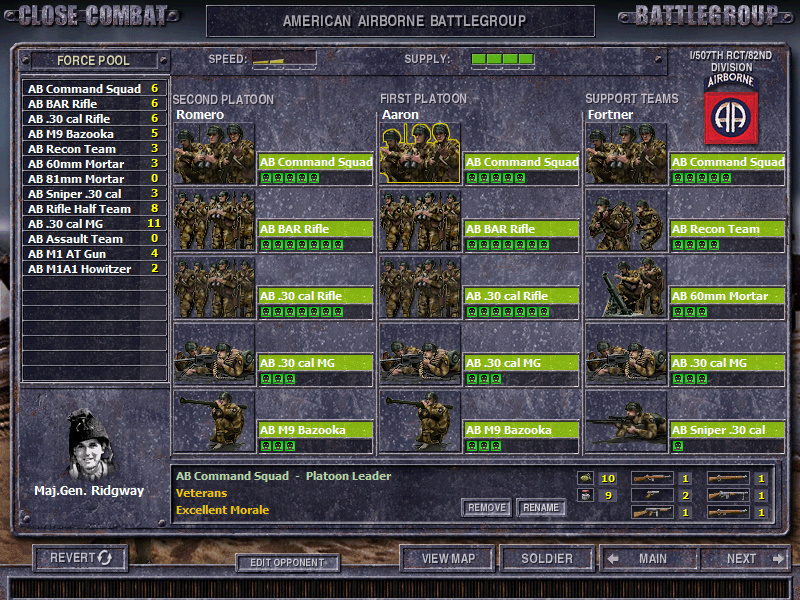 What surprised me about my return to Close Combat 5 is how stellar its moment-to-moment strategy still feels. Each battle is a race to control as many capture points on a map, but Close Combat 5 moves at a tense crawl. Units move slowly and carefully and have a high degree of autonomy when it comes to making their own decisions. My job is to give them general orders, like moving to a certain location or attacking a specific area, but soldiers will also make their own decisions in the heat of a firefight. They’ll even scavenge weapons off of dead bodies if they run out of ammo (did I mention each soldier has their own ammo?).

Close Combat 5 strikes a near-perfect balance between giving me enough tactical options, like being able to order a unit to toss smoke grenades to conceal an advance, while still making the soldiers feel like autonomous, thinking creatures I don’t have absolute control over.

It’s good that maps aren’t all that big, because Close Combat 5 is a battle of inches.

It’s good that maps aren’t all that big, because Close Combat 5 is a battle of inches. Most of the time, my eighteen squads (divided into three platoons), are crawling in the dirt trying to avoid enemy fire. Though it’s technically a 2D game, Close Combat V’s simulation treats maps as if they are 3D environments with different elevation changes.

This can sometimes be frustrating because it can be hard to tell when the terrain might block a squad’s line of sight. Trees, buildings and ditches are obvious, but more than once a flank was foiled because I didn’t realise the enemy squads were protected by a slight hill. But I also appreciate how much it emphasises the need for careful positioning and proper infantry tactics.

I just wish there was a way to tell when squads were protected by cover or not. Natural obstacles like trees, bushes, and even downed planes can all be used as protection, but it’s never quite clear if my units are properly concealed from incoming fire. I really wish there was a simple indicator, like the one in Company of Heroes, to show how safe my units are. 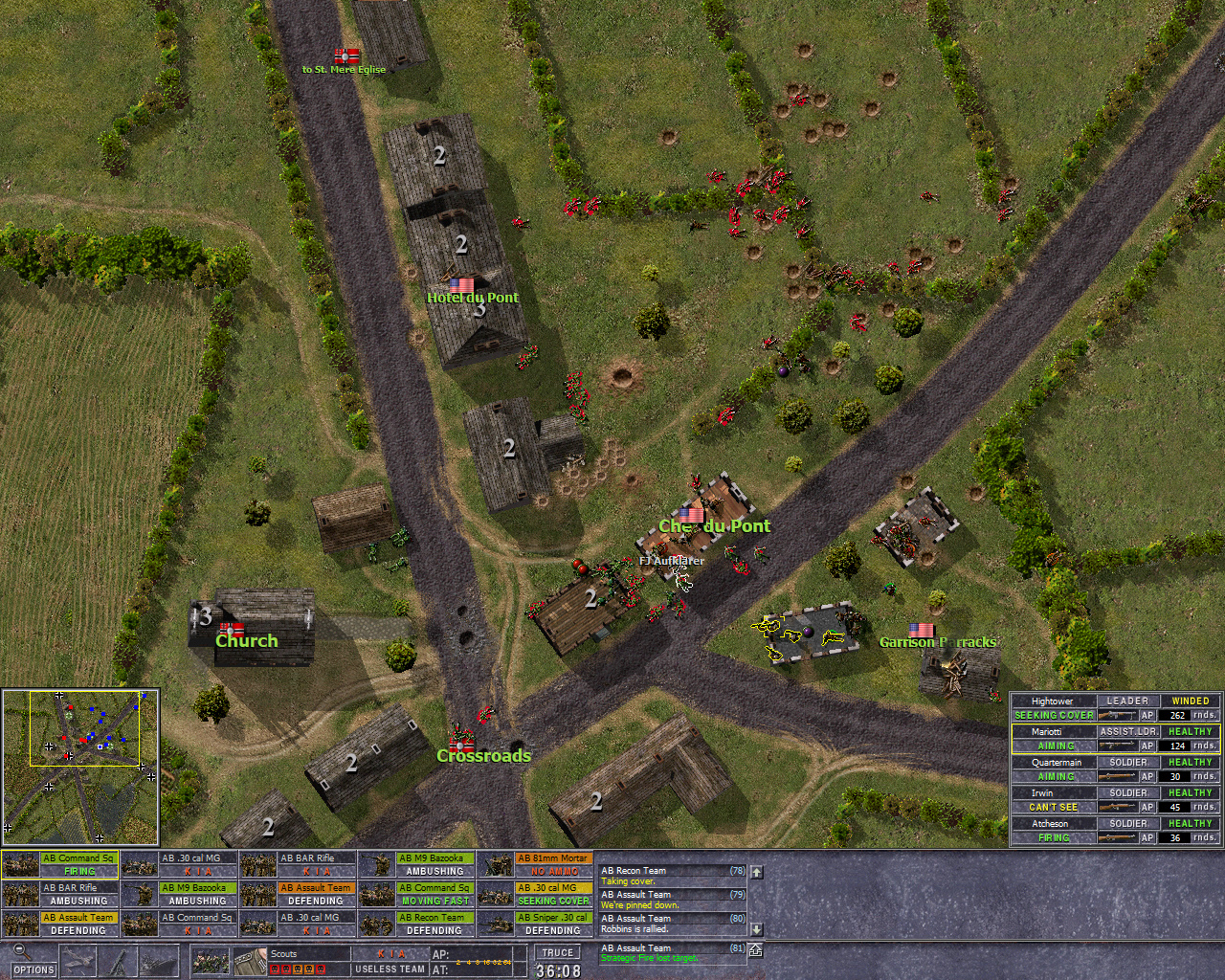 All the cover in the world can’t protect you from a German Panzer or a mortar, though. Again, it’s wild to see how deep Close Combat 5’s simulation goes with these units. Tanks, for example, are crewed by soldiers that each have individual roles to fill and also have several stages of disrepair. Treads can be busted, leaving a tank immobile, or the main gun can be disabled by incoming anti-tank fire. If the tank is destroyed outright, its crew will flee and take up arms as foot soldiers.

In an individual battle, all these elements feed into enthralling conflicts as platoons fight viciously over every bombed-out house or fallow field. But Close Combat 5 really shines when you jump into one of its Grand Campaigns, which let you simulate a full-scale invasion of Normandy over several weeks.

Echoing amazing sandbox campaigns like Dawn of War: Dark Crusade, Grand Campaigns dice Normandy up into two dozen battlefields that you fight over each turn. Managing several armies, including their resupply lines and reinforcements, adds even more depth to each battle. I love that individual soldiers persist through each fight, which makes me feel even worse when I make a bad call and get a squad of battle-hardened veterans slaughtered. There’s also a lot of options to tweak in these campaigns. You can play as either German or American forces, but can also toggle different victory conditions and half a dozen other options that let you customise battles.

Playing Close Combat 5 today, though, just makes me sad that this series never seemed to keep its momentum. There are newer entries (and even overly-expensive remakes of Close Combat 5 and earlier games), but all of them seem to struggle in modernising the game or finding smart ways to expand the strategic options and challenge.

Even so, it’s shocking just how enjoyable and playable Close Combat 5 is today. And though its simulation of individual soldiers and their mental states isn’t as revolutionary and eye-opening as it was to me as a kid, this is still a great World War 2 strategy game.