Folding-screen laptops were not something I thought I could be excited for, but after seeing Asus’ new Zenbook 17 Fold OLED at IFA, I am beginning to change my mind. Somewhat implausibly, Asus made a functional, practical even, 17-inch tablet that folds in half and becomes a portable 12-inch laptop. It’s eye-wateringly expensive, but after four generations of pricey Galaxy Folds, would you expect anything else?

The Zenbook 17 Fold OLED is a decent piece of kit as a laptop, but its huge folding screen sets it apart from almost everything else out there. The sole exception is the Lenovo X1 Fold, first announced in 2019, which features a similar, if smaller form factor.

Asus’ take on the concept is similar to Lenovo’s: a large foldable display that bends down the middle, an adjustable kickstand for when you need to prop it up, and a slim magnetic keyboard for text entry and navigation. 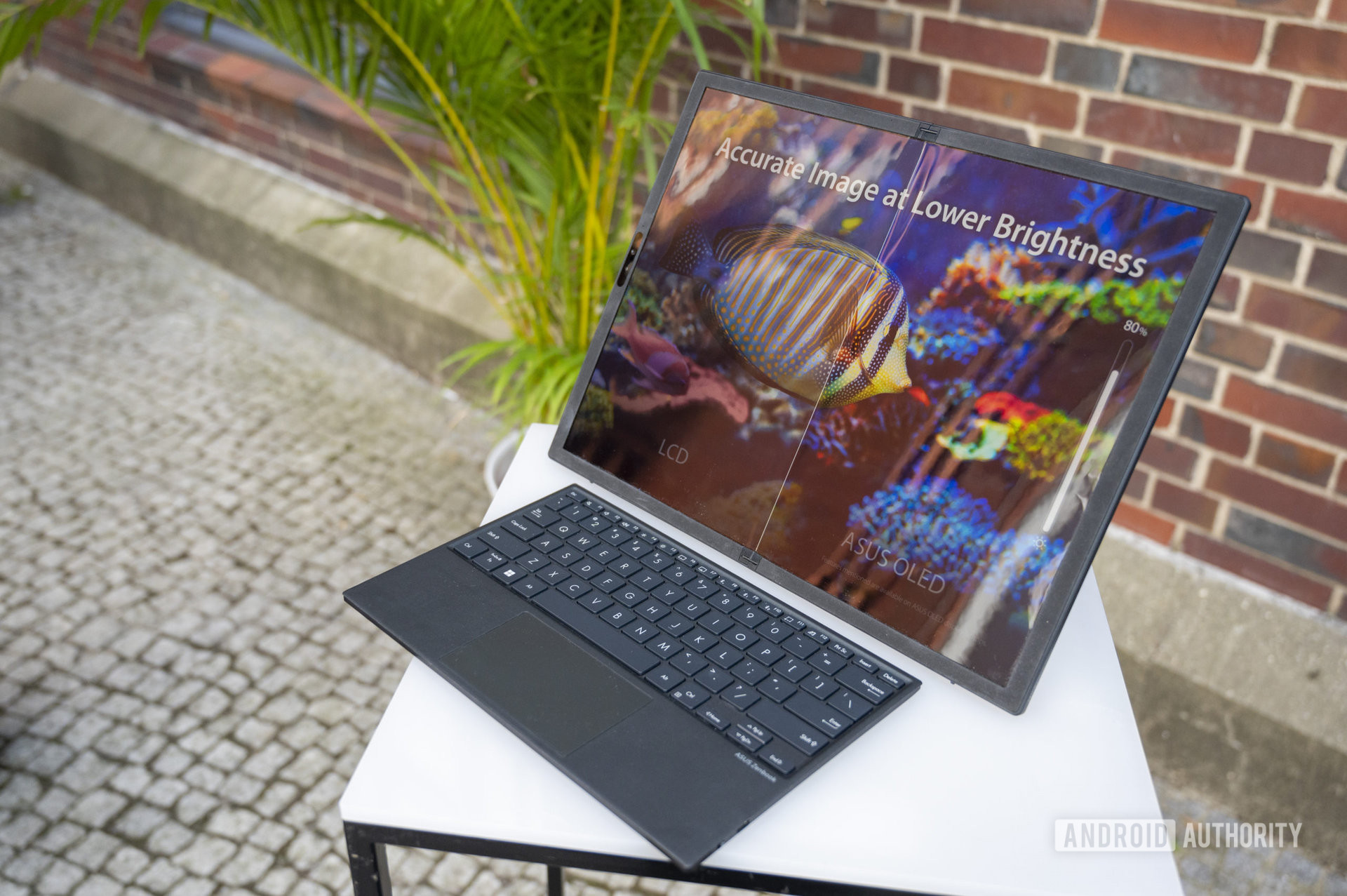 In tablet mode, when the screen is fully unfolded, the Zenbook 17 Fold provides a vast 17.3-inch touchscreen to play and work on. It’s a nice and bright OLED panel, with great contrast ratios and enough pixels to make everything look crisp. While there are plenty of other 17-inch laptops out there, you just can’t get this size in the roomy, productivity-enhancing 4:3 format.

Also read: The best foldable phones you can get in 2022

There’s a crease running down the middle that’s easily noticeable when you look at it from a side, but it mostly disappears when you view it from the front. Your eyes naturally focus on the picture on the screen, rather than the subtle distortion from the crease. It’s a lot like looking at the Fold 4, Flip 4, or any of the other foldable phones out there – the crease simply isn’t a problem.

While you can use the Zenbook 17 Fold as a tablet, it’s more enjoyable to treat it as a portable monitor

Unfortunately, Asus did not make the jump to ultrathin glass, like Samsung did for its foldables. The Zenbook 17 Fold OLED’s cover layer is made of glossy plastic, which feels less premium and durable than glass. It also picks up fingerprints like there’s no tomorrow, which tends to be a problem when you need to repeatedly fold and unfold the screen. 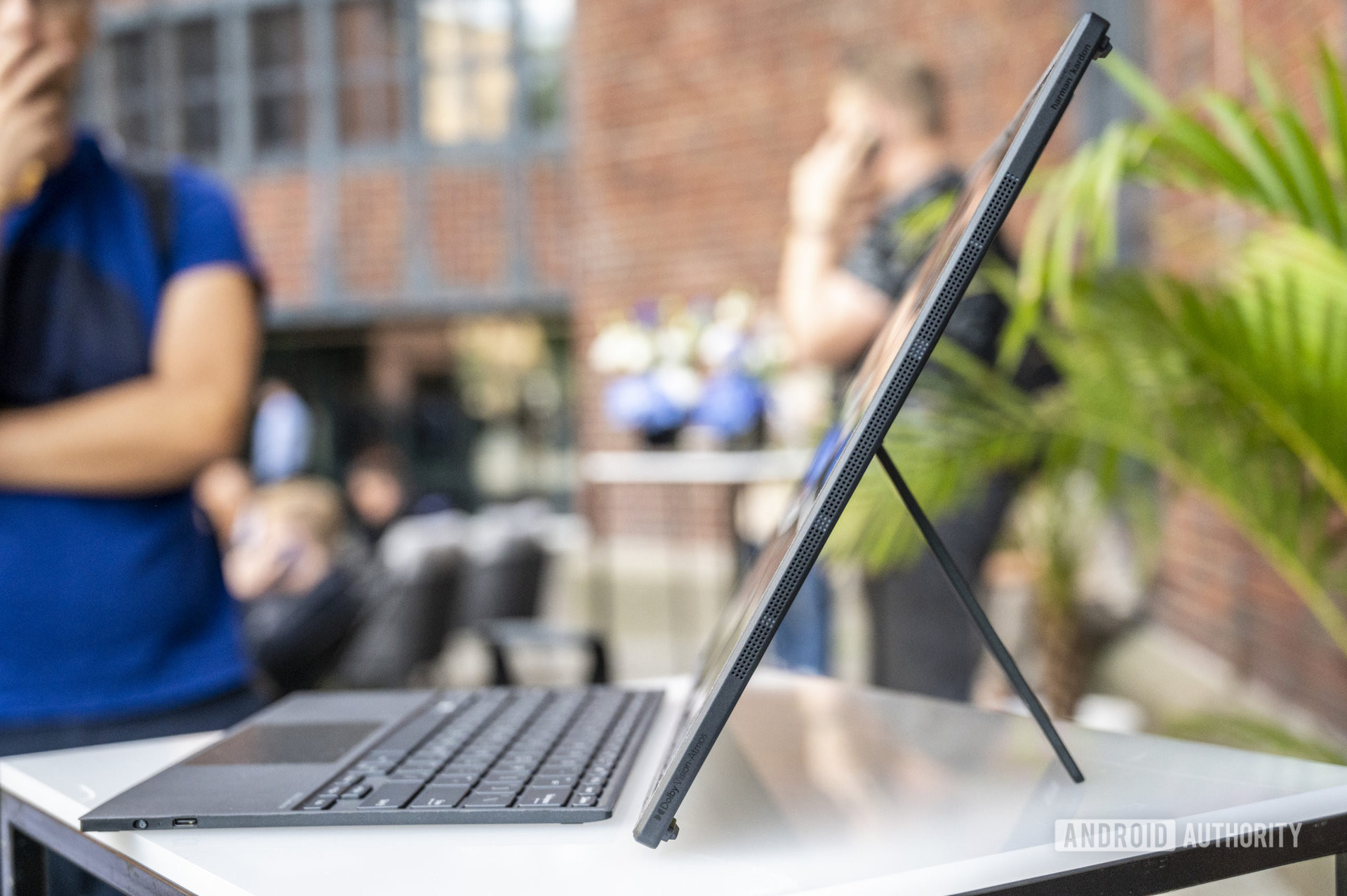 While you can use the Zenbook 17 Fold as a tablet, it’s more enjoyable to treat it as a portable monitor (or an All-in-One PC). Just open the kickstand, prop it on a table, and use the keyboard and/or touchscreen to interact with the screen like you would with a desktop computer.

Asus said the hinge inside the Zenbook 17 Fold OLED is rated for 30,000 open-and-close cycles. Based on the manufacturer’s calculations, that should ensure durability for at least five years of average use. Company representatives did warn that users should treat the device with care – this is no rugged machine you can abuse without repercussion. It’s not just the hinge you have to worry about either – as we’ve seen with other foldables in the past, debris can get lodged underneath the flexible screen. Due to its sheer size, Asus’ foldable laptop seems especially susceptible to this vulnerability. 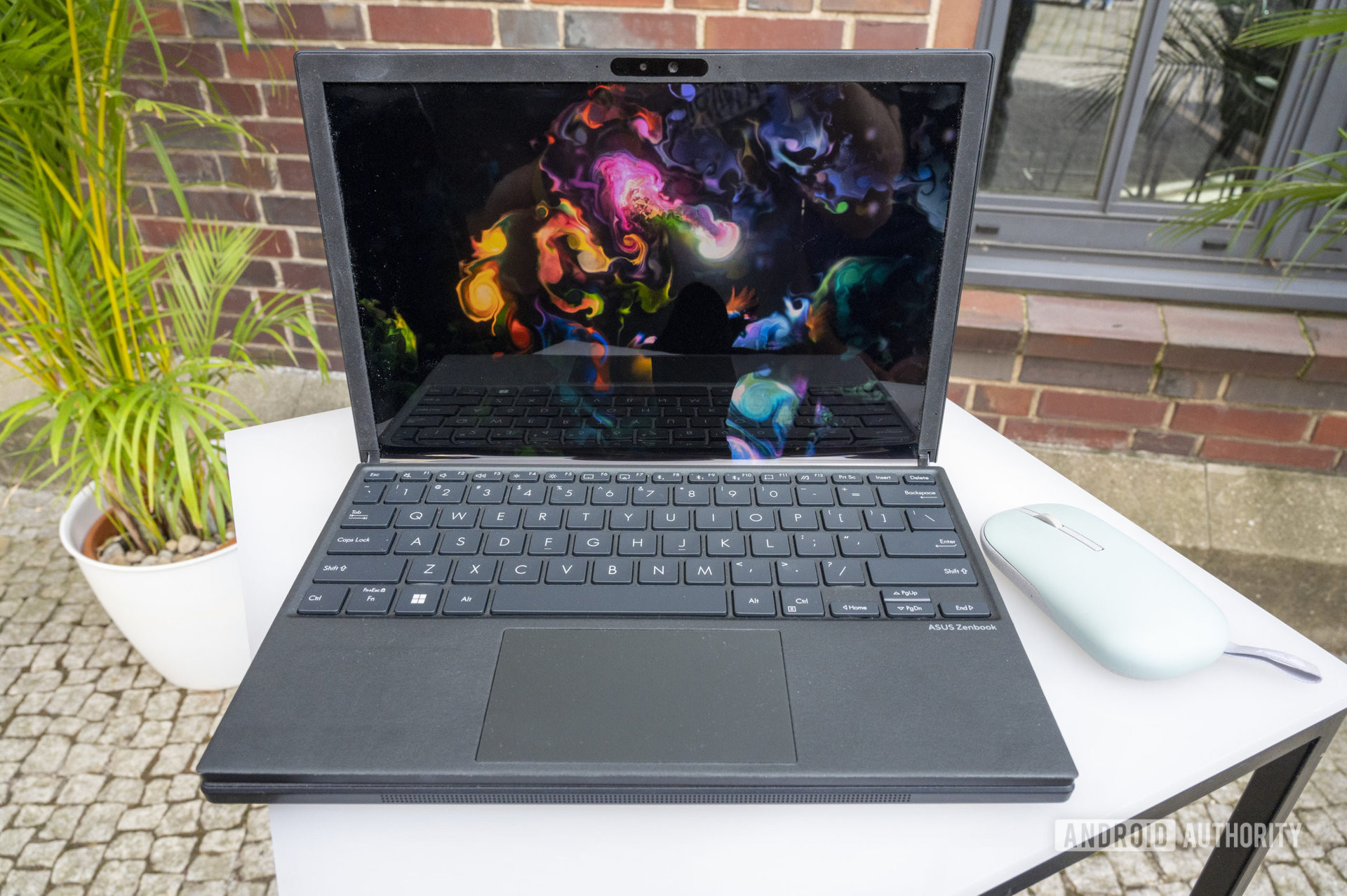 Fold down the screen and you’ve got yourself a compact 12.5-inch laptop. You can place the bundled wireless keyboard on top of the lower half of the screen. The device detects it and adapts the UI to only use the upper half of the display. In this mode, the Zenbook 17 Fold OLED behaves like a normal small laptop. Alternatively, you can use the device in touchscreen mode. The content just “flows” from the vertical half of the screen to the horizontal half. You can bring up a virtual keyboard to type, or you can scroll through documents and web pages across the two halves of the screen. Personally, I found this mode clunky, though I can’t deny the usefulness of being able to fit more content on the screen.

It’s a shame that the Zenbook 17 Fold is not stylus compatible, as the plastic screen is not strong enough to withstand a sharp stylus tip.

Also read: The best laptops you can buy in 2022

For such a flexible device (pun intended), it was important for Asus to get the design and the ergonomics right. It’s a bit of mixed bag, in my experience. The Zenbook 17 Book feels classy and reassuringly solid in the hand, especially when it’s folded up and closed. It looks a lot like a nice leather-bound organizer; I could see an executive whip it out during a boardroom meeting. It’s chunky and pretty hefty, at around 1.5kg, but not excessively so, considering the 17-inch screen it houses.

While the build and design are generally on point, I did spot some flaws. For one, it’s not easy to quickly open and unfold the whole contraption. Or at least it wasn’t obvious and intuitive for me, in the brief time I spent with the device. The kickstand on the back doesn’t inspire confidence either. It’s small and flimsy-looking – it will do the job when using the screen on a desktop or other flat surface, but it won’t be very stable in a lap or on your couch.

The Bluetooth keyboard is generously sized or at least as big as you can expect from a 12-inch form factor. It attaches magnetically to the bottom of the tablet, but you can also use it as a standalone keyboard. It does suffer from a slight flexing issue when you place it on top of the lower half of the screen. 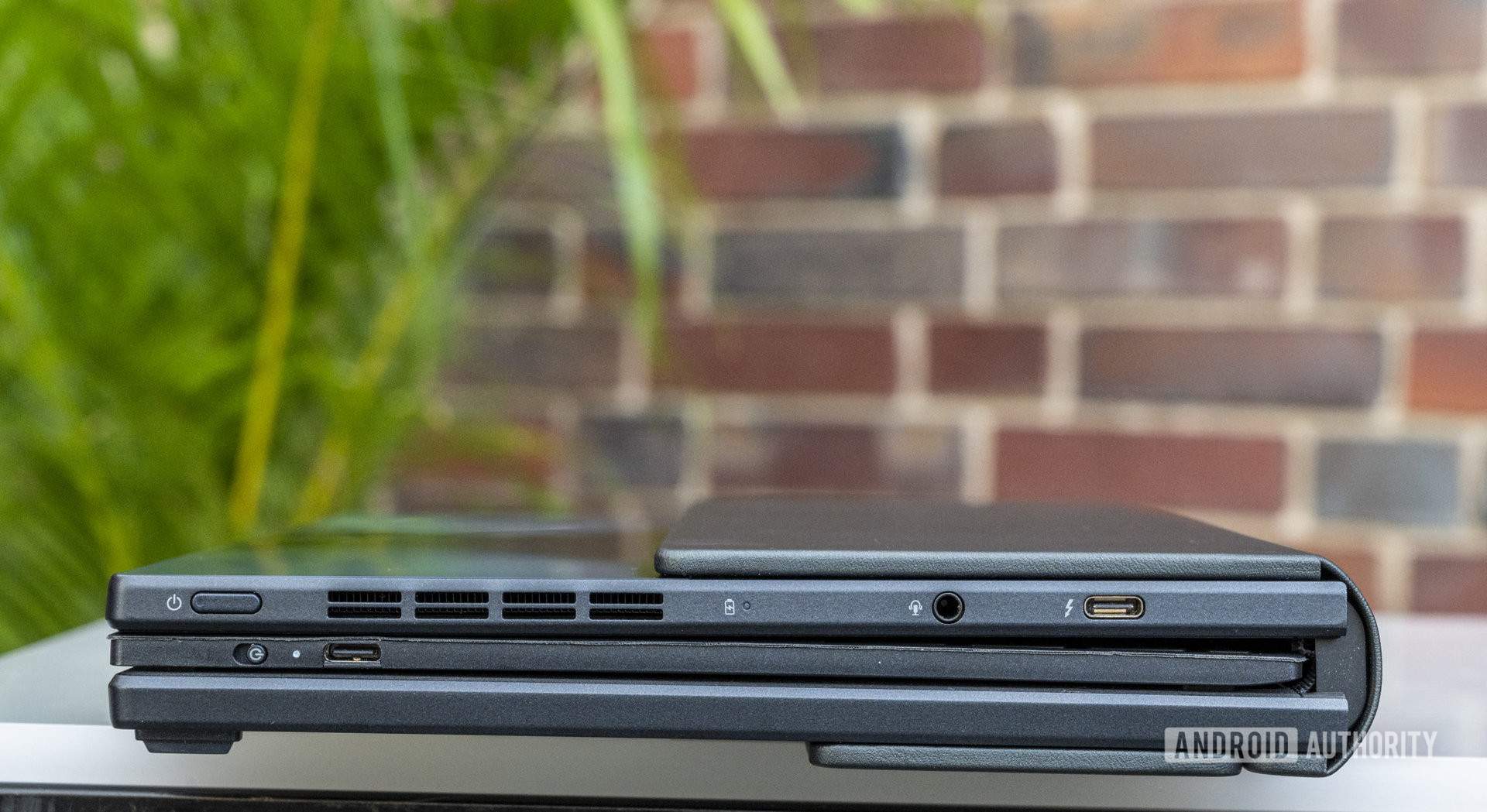 Overall, Asus has done a good job bringing the Zenbook 17 Fold up as a ready-to-market consumer product. Just remember this is a first-generation, second-of-its-kind device. It’s far from perfect, just like Samsung’s original Galaxy Fold was flawed in its first iteration.

Looking beyond its shape-shifting abilities, the Asus Zenbook 17 Fold OLED is a competent laptop, if not a stellar one. You get an Intel Core i7-1250U CPU, Intel Iris Xe integrated graphics, 1TB of storage, and 16GB of RAM. The performance is adequate for a content consumption laptop or office computer, but this is not a great choice for gaming or video editing. Battery life is surprisingly solid considering the size of the screen and the limited space inside, at about 10 hours. The port selection is meagre – you get two Thunderbolt 4 ports and a headphone jack. 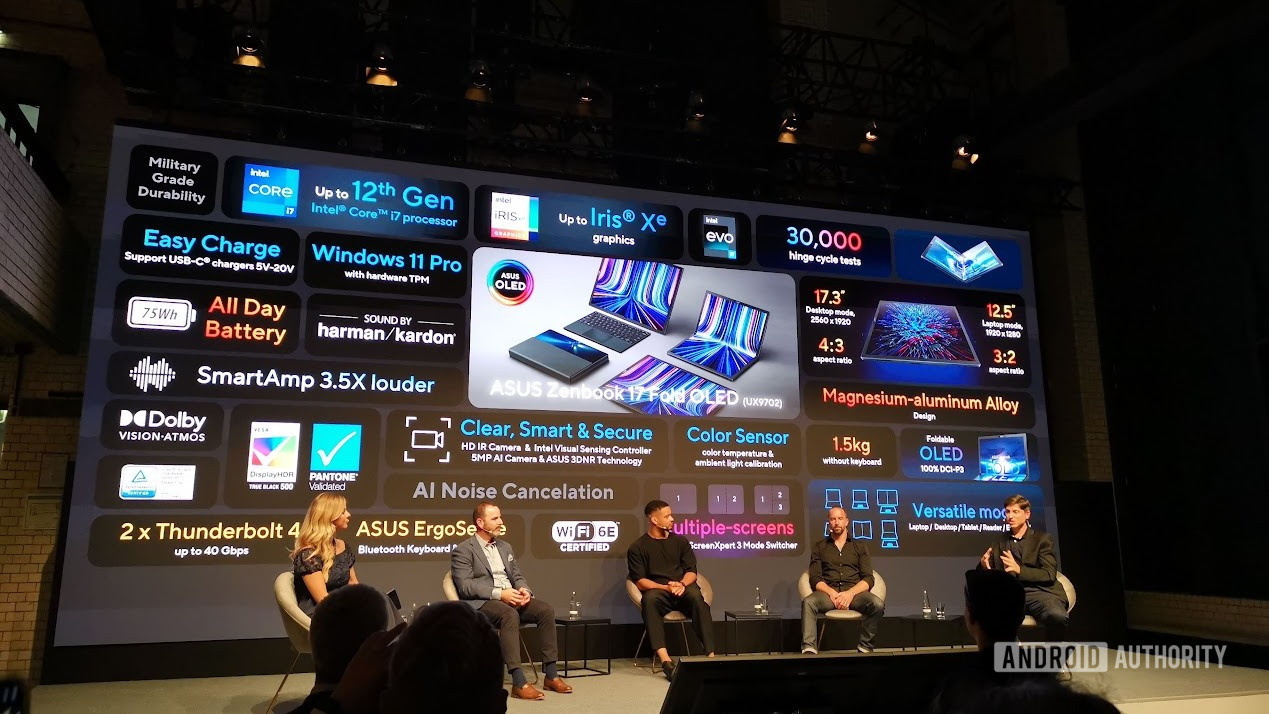 The Asus Zenbook 17 Fold OLED is a pricey piece of equipment, starting at $3,500 in the US and €4,000 in Europe. That’s the massive price you’ll have to pay to be on the folding edge of computing, but is it worth it? Not really, at least not for most people. I am fairly sure that Asus doesn’t care about that though, as the Zenbook 17 Fold is not a mass-market product. It’s other things though: a road opener, a vision demonstrator, a statement of interest, and a shot across the bow towards the competition.

Zenbook 17 Fold OLED is a road opener, a vision demonstrator, a statement of interest, and a shot across the bow towards the competition.

The short time I spent with the Asus Zenbook 17 Fold OLED has convinced me this form factor has immense potential. While the product itself makes a few too many sacrifices, especially for the huge price it commands, Asus’s foldable laptop is undeniably cool. The ability to expand a tiny laptop into a beautiful big screen is compelling. All Asus needs to do now is refine the idea over a few generations and bring the price down to earth.