Apple is doubling down on its efforts to comfort retail employees and dampen any possible resurgence of active unionization in its 270+ stores by downplaying the significance of Apple Towson Town Center as the first store to unionize. According to employees who were present in recent meetings, Apple is making a “grass is not greener on the other side” argument even before the Apple Towson union has gotten organized.

Late last week, Apple retail employees nationwide were invited to an FAQ-style meeting where store management attempted to answer questions on Apple Towson and create an open environment to discuss unions. Apple Towson made history in June by becoming the first Apple store to unionize, and the idea of unionization has since taken hold with many employees seeking improved working conditions.

Several store managers had addressed the topic of the union vote at Apple Towson as it was happening, but for many others, it remained an elephant in the room. Last week during a “Daily Download,” the term used for 15- to 30-minute meetings before stores open, Apple leadership appeared “cheery, and weirdly happy to discuss unionization efforts,” one Apple Store employee said, asking to remain anonymous. “We were all expecting to get a new manager or hear some groundbreaking news about our store after the Download was hyped up at first. Then it turned out to be about Towson. We were all confused about why they were excited to talk about it.”

The talking points last week seem to have been an attempt by top Apple executives to argue that Apple Towson’s vote to unionize will do more harm than good in employees’ relationships with the company they work for, according to multiple sources who attended the meeting. “They wanted to somehow make it seem as though Apple Towson had failed, even though they’ve hardly begun. It was a typical scare tactic that failed to work,” one employee said.

Leaders told staff that the meeting, which took place in most locations last Thursday, was entirely optional for attendance. Employees were reluctant to miss the meeting, though, as doing so could be perceived as an unwillingness to hear Apple’s perspective and, as a result, place targets on their backs.

The FAQ-style meeting was designed to answer questions preselected by Apple, including:

According to employees who attended the meeting, the answers from Apple leadership seemed intended to intimidate employees and downplay the benefits of joining a union, such as emphasizing that employees cannot leave a union once they join, that joining a union does not guarantee better benefits and pay, and that Apple Towson, despite its vote, still received the same pay raises all other retail employees received over the summer.

Store leaders also offered a chance for employees to ask questions, but they were largely unable to give on-the-spot answers. “I don’t have the answer to that, but I’ll get back to you after I find out,” was a go-to response for questions asked, including whether Apple is providing any resources to employees who wish to join a union. 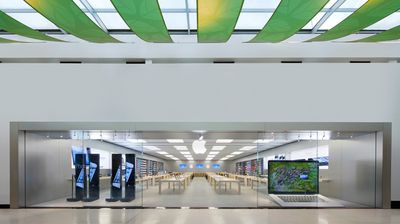 Apple Towson in Maryland. The first ever ‌Apple Store‌ to form a union.

During the meeting, store leaders also suggested that negotiations between Apple Towson, the union, and Apple leadership had fallen through and had been “unsuccessful.” Apple Towson has not, however, formally begun negotiations with Apple and is still in the early stages of training and preparing for talks through the bargaining committee.

In the larger context, the latest union-related talking points come weeks after Apple offered merit-based pay increases to its retail staff. The increases typically happen yearly in the fall, but Apple, in a move widely speculated to have been an attempt to ease employee concerns, moved them up to the summer.

Although the pay raises coincided with ramped-up union momentum, Apple claimed during the meetings with staff that they were purely “coincidental” and that union efforts had in no way impacted Apple’s decision to offer the pay raises now rather than in the fall as usual. “None of us believe this is true because we all know the company’s hand is being forced. But the fact that a manager said from the get-go that the unionization had zero impact was the most disturbing to me,” an Apple employee based in Texas said.

Based on employee conversations with MacRumors, the merit-based increases, irrespective of timing, angered employees more than they satisfied concerns. Some employees who are already on edge about working conditions felt that the 2–3% pay raises in many cases were a “slap in the face to the dedication we’ve shown during the pandemic,” an employee at a store that’s in the early stages of collecting signatures to bring a unionization vote told MacRumors.

Talks within stores about unionizing have been relatively stagnant over the last couple of weeks, mainly due to many employees opting for a “wait and see approach” to whether their concerns will be addressed following the pay raises and more open dialogue from store leadership to discuss workplace conditions. Apple leadership across the 272 retail locations made it clear that discussing a union is not a “hush subject,” yet many employees continue to feel the nearly $3 trillion Cupertino tech giant is doing everything it can “to be anti-union at every grasp.”

Note: Due to the political or social nature of the discussion regarding this topic, the discussion thread is located in our Political News forum. All forum members and site visitors are welcome to read and follow the thread, but posting is limited to forum members with at least 100 posts.