Apple today updated its list of vintage and obsolete products to add the iPhone 6 because it has now been more than five years since the device was last offered for sale. The ‌iPhone‌ 6 has something of a unique launch situation, so the timing of its addition to the list is a little bit off. 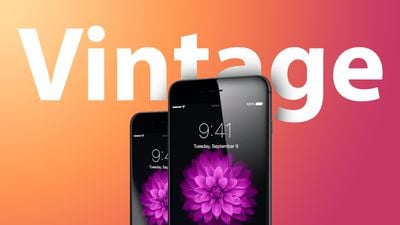 The ‌iPhone‌ 6 Plus, the sister phone to the ‌iPhone‌ 6, was added to the vintage list earlier this year.

iCloud Mail Currently Down for Some Users

The vintage products list features devices that Apple stopped distributing for sale more than five years ago and less than seven years ago. Apple provides service and parts for vintage devices for up to 7 years, or as required by law, but repairs are subject to parts availability.

Obsolete products are products that Apple stopped distributing for sale more than seven years ago. All hardware service is discontinued for obsolete products, with the exception of Mac notebooks eligible for battery-only repair.

In addition to adding the ‌iPhone‌ 6 to the vintage list, Apple has moved the 2012 iPod nano 7 and the fifth-generation iPod touch from the vintage list to the obsolete list, while the 2015 iPod nano models are now listed as vintage. The fourth-generation iPod shuffle from 2012 was moved to the obsolete list, and the 2015 version is now listed as vintage.

A farewell, THE slap, and more