Alim Smith enjoys living in and working from his native Delaware because, as he describes it, “it’s just a bunch of parks and no competition.” The 31-year-old multidisciplinary artist and his exaggerated style of portraiture gained popularity on social media when a few notable names (Erykah Badu, Snoop Dogg, Martin Lawrence) shared his work years ago; since that exposure, he has exhibited in shows and continued to sell prints independently. But his big break, arguably, came last summer, when he was invited to audition to paint the promotional art for season three of FX’s Atlanta (which premiered March 24). It can be seen on billboards, bus stops, and plastered on walls around Los Angeles and in cities all over the country.

“I love this show,” Smith says. “I’ve been watching what Donald Glover has been doing since I was in high school when he was on YouTube.”

Smith’s style is most neatly defined as “Afro-Surrealist,” an experimental, whimsical, absurd take on visual storytelling that shows Black faces reimagined in ways that appear beyond reality but remain fully human. Beyond painting the portraits of the show’s four core cast members, Smith also painted the Atlanta title in its classic typeface and every other element seen on the posters (the Eiffel Tower, a mysterious desert landscape). The end result shows all of these separate oil paintings superimposed on each other, creating a sharp distillation of the show and its universe.

Smith spoke to The Srdtf News by phone about how he embraced this opportunity, what his creative process looks like, and the inspirations behind his Afro-Surrealist style.

How did it come about that you would illustrate the Atlanta season 3 key art?

In August 2021, someone not from FX but a person who was like the facilitator for all of their projects hit me up and asked me if I would want to work on Atlanta posters. It started off with an audition: I had to draw these black and white pictures. I probably drew like 80 pictures, different iterations of how these faces could be distorted and contorted. Then I got past that phase.

I had to do the same exact phase all over again, but now in color and adding other little details, which was probably like another 100 pictures — and they approved those. Then they finally got new pictures of the talent. So I had to redo the entire process all over again, and this time it was even more strict with more edits.

When I look back through all of the email threads, it was over 300 pictures just to get to the point where I could start painting the portraits. So for five months, I wasn’t working on any paintings. I was just doing digital renditions and sketches — some physical sketches as well — for five months straight, just to get to the point where they could be like, “Okay, now you can paint.”

How did you approach this assignment and what’s your creative process? What tools and software do you use?

I’m not really a digital painter, I’m much more of a hands-on, oil painter. [Sometimes] a little bit of acrylic paint. I like to sculpt.

So the posters and billboards we see are prints of your oil paintings?

Yeah, they are. The only reason I was doing digital edits is because there’s no way I could do that many edits hand drawn. I would do a sketch, and then I would digitize it so that I could do little edits in Photoshop and on my iPad. 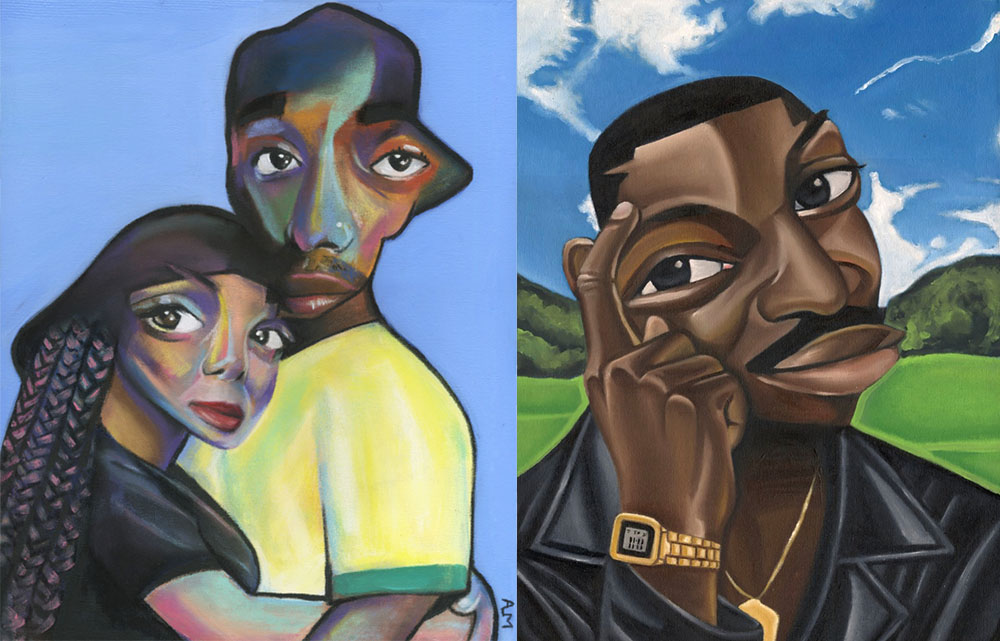 When you were creating the drafts for the FX and Atlanta teams, what was their feedback like?

They wanted me to pull back; I went so weird. I came up with some really weird work styles. But they wanted me to dial it back so people could still kind of recognize who it was.

Why do you think the themes in Atlanta mesh well with your painting style? What’s Afro-Surrealist about Atlanta?

What’s Afro-Surrealist to me about Atlanta is just its existence…and how well it’s received. Like, that’s surreal.

How do you select your colors? What sort of moods and feelings do you try to portray?

I think I really choose them based on how I would match clothes. And also, when I was in art school, it was mostly all black and white. And the color pencils and markers were so expensive. So I would just use whatever colors I had and make them work just based off of color value. I was using a grayscale but with colors; you can use any color you want as long as you are following the color gradient scale of hues and tones.

Did you get to meet with Donald Glover or any members of the cast during this process?

I didn’t get to meet them. But I do know that a couple of the actors will probably be getting the original paintings. And I know that they all had to sign off on their likeness, so I couldn’t start painting until they all said: “Yes, this looks like me enough.” 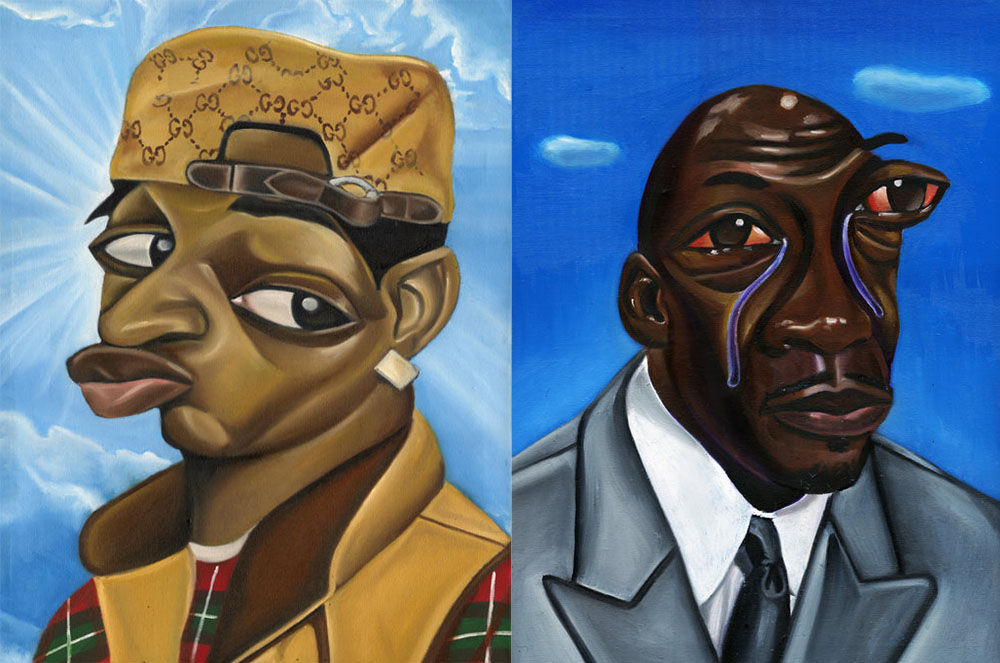 Your work was shown at an Instagram pop-up exhibit this past February in Los Angeles called “Family Reunion,” paying tribute to Black meme culture. What are some challenges that come up when creating art from popular media, like memes and TV show characters?

I think the only challenge is when you’re creating pictures of people that people already know, and making sure I don’t get too weird. Making sure that even if the eye is off center, and the mouth is hanging off of the side of the face, you can still generally tell who the person is. That’s probably the biggest challenge: just making sure you capture the likeness enough.

How did it feel when you finally saw the posters out in the world?

It was surreal. I’ve been looking at the pieces for months, so to see them outside of my studio and outside of the computer screen is still surreal honestly. When I look at the little Hulu icon I’m like, “I was just watching the show a couple months ago. Now my art is the thing that directs you to the show!”

How do you ultimately define Afro-Surrealism, and what are your influences?

The simplest version is just: weird and Black. For me, I feel like it’s at the intersection of hip-hop and Dr. Seuss. I realized my interest in surrealism is because of Dr. Seuss; I think a lot of Dr. Seuss’s drawings are inspired by Salvador Dali…and MC Escher. Seeing all of those weird, warped houses and reading those Dr. Seuss stories with crazy characters and nothing but rhyme…it’s like the intersection of hip-hop and Dr. Seuss.