Congratulations! You’ve decided that now is the perfect time to build yourself a gaming PC. Consider this gaming PC build guide your companion on your thrilling journey into the world of PC gaming, PC gamer. Below is a certain set of components chosen by yours truly to deliver excellent frame rates while keeping costs reasonable.

I don’t mind if you take bits of this build and choose other components to the ones listed, either. That’s the beauty of PC gaming: so long as the parts slot together, you can do what you want.

The budget for this system will be around $1,000, with about $400 being allocated to an Nvidia GeForce RTX 3060 Ti (assuming you can find one at that price, and that’s a big if) as the GPU of choice for this build. This will ensure excellent performance for playing most games at 1080p, and 1440p is absolutely on the cards. With upscaling technologies like DLSS (opens in new tab), Nvidia’s AI supersampling tech, or AMD’s FSR 2.0, you could definitely reach 4K with some games. Tasty.

The other part of the picture is the processor, and for now, the Ryzen 5 5600X is one of the best options at a reasonable price I can stomach. The Intel Core i5 12400 (opens in new tab) and B660 motherboards are also a great option now they have become more readily available.

When it comes to gaming, everything that’s great about the 5900X rings true for this more affordable Zen 3 chip as well. There’s nothing between any of the Ryzen 5000 chips in games, which means you’ll hit the same frame rates with this chip as you will the much more expensive chip. Which is incredible when you think about it—top-tier performance from the most affordable Zen 3 CPU? We’ll say yes to that every single day.

This does have half the core count of that top chip, rolling in as it does with 6 cores and 12 threads. This is only an issue with those more serious workloads, though, and this is more than sufficient for more reasonable stuff. You could argue that gaming could go beyond the 12-threads we have here, but there’s no evidence that is the case so far, and that’s even though the next-gen consoles are rocking 8-cores and 16-threads.

The Ryzen 5 5600X also bucks the Ryzen 5000 family’s trend by shipping with a Wraith Stealth cooler, so you don’t have to drop extra money on a third-party chiller. You don’t need to, but if you do, you’ll hit higher clocks for longer and also open up the wonderful world of overclocking, which could make it worthwhile. This is a decent little overclocker, and while it won’t affect gaming much, it’ll help in other areas nicely. 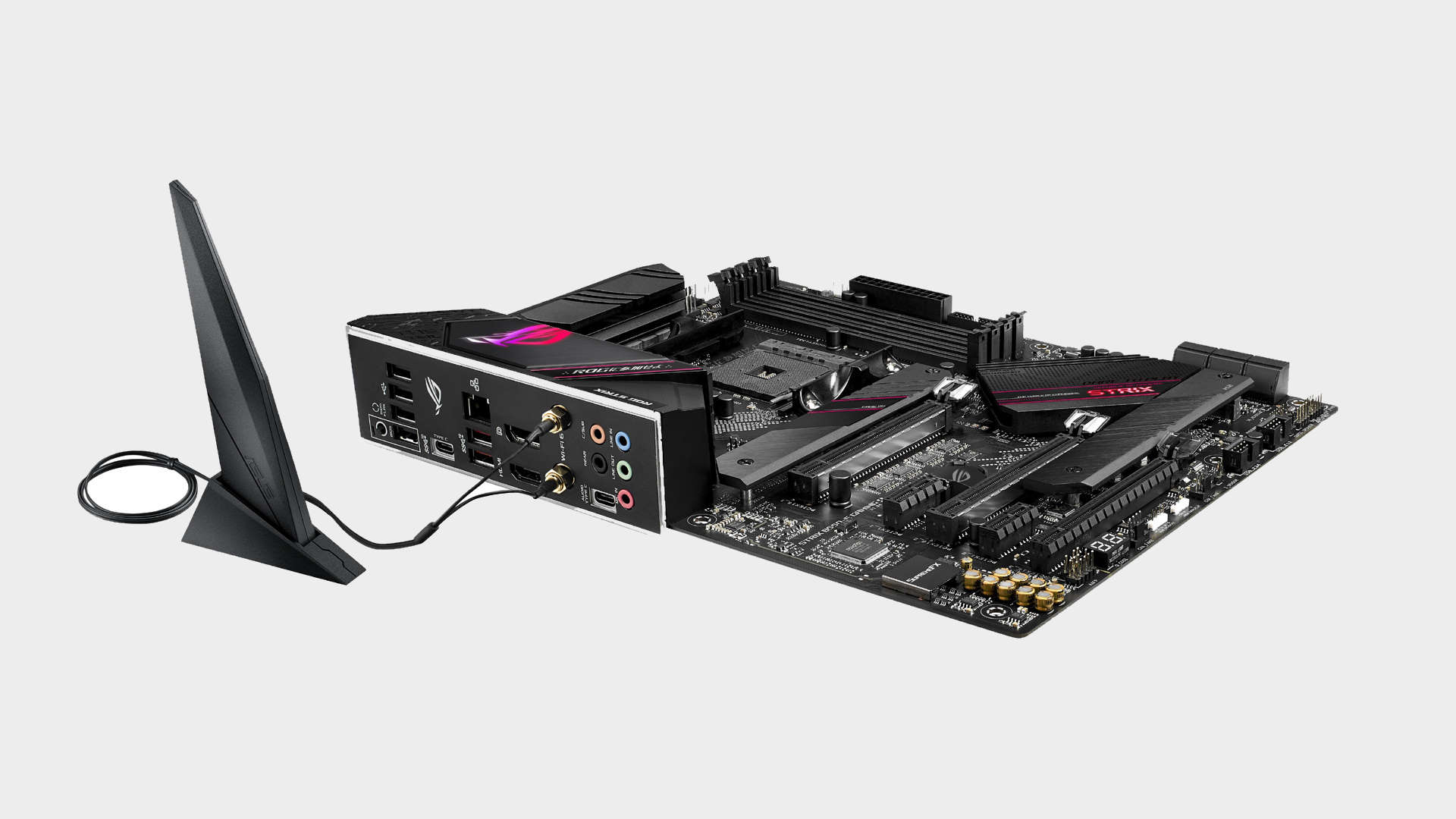 The best B550 motherboard

Sure, the Asus ROG Strix B550-E isn’t the cheapest motherboard for a Ryzen 5 5600X chip, but it offers a huge amount of potential room for your PC to grow in the future. It’s a premium motherboard, with all the trappings you’d expect from Asus’ Republic of Gamers stables, such as 14+2 power stage, M.2 heatsinks, and pre-installed backplates. You also get Wi-Fi 6 wireless networking as well as Intel 2.5Gb ethernet too. And RGB LEDs, of course.

At a glance it cuts a convincing enthusiast dash thanks to copious heat sinks and spreaders, including one for each M.2 slot, snazzy LED lighting, and three full-length PCI Express slots, two of which come in Gen 4 trim.

Impressively, those slots support dual-GPU graphics, each in eight-lane PCIe 4.0 configuration, ensuring the maximum currently available bandwidth for high end graphics. A niche concern? Perhaps, but it’s indicative of the ambitions of this board. Similarly, the Strix B550 has not just an eight-pin but also a four-pin supplementary CPU power supply connector. Again, that’s an indication of a board designed for high performance.

Performance too is typically good for a high-end Asus board, matching X570 motherboards for gaming performance without issue. The Asus ROG Strix B550-E Gaming is the whole package then, and right now is our all-around pick for the best B550 motherboard. …stupidly expensive if you do

The RTX 3060 Ti is the GeForce card that we want in our mid-range machine. That was true last year, when buying one was almost impossible, but it’s true today for another reason. The next-generation of Nvidia and AMD GPUs are just around the corner, but history tells us the first to launch will be the high-end GPUs. That means that mid-range and budget GPUs, such as the RTX 3060 Ti down to the RTX 3050, will stick around a lot longer before being replaced.

So if you want a great gaming PC now, and one that doesn’t break the bank, the RTX 3060 Ti is one of the cards out there we’d still recommend.

It marks the same incredible generational leap in performance that has come to epitomize the Ampere architecture, up until the non-TI GeForce RTX 3060 (opens in new tab), that is. With performance that can often outpace the RTX 2080 Super, for a nominal $399 price tag, it’s the mid-range card to beat.

And, because of its RTX 2080 Super performance levels, that means you can nail 1080p and 1440p frame rates, but also that 4K at 60fps isn’t beyond the realms of possibility for this GPU. The RTX 3060 Ti then delivers gaming performance that’s rather stupendous when you look at generational gains over even the RTX 20-series—next to the 10-series, it’s quite frightening, actually. 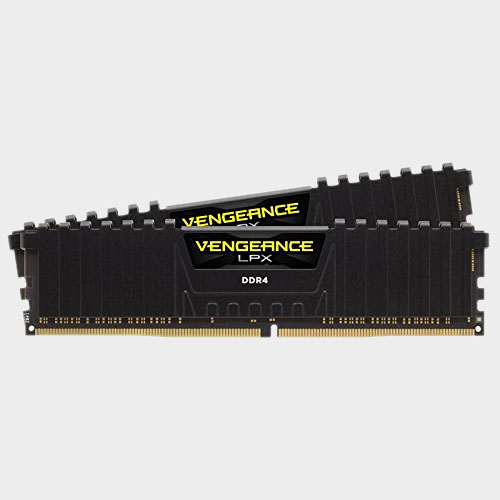 The best value RAM you can get

High frequencies on a budget

Memory is pretty straightforward these days, though if the price isn’t much higher you can improve performance (opens in new tab) slightly with faster RAM. DDR4 prices have thankfully galvanized somewhat, with typical costs for 16GB often falling well below $100. There are many options to choose from: Adata, Ballistix, Corsair, Crucial, G.Skill, GeIL, Gigabyte, Hynix, HyperX, Micron, Mushkin, Patriot, PNY, Samsung, Team, and XPG are all good brands as far as we’re concerned.

Our main goal for gaming memory is DDR4-3000 or higher, with as low a CAS latency as possible, but at a good price. It doesn’t make a lot of sense to buy extreme memory for a mainstream build, but with DDR4-3200 only costing $10 more than basic DDR4 kits, it’s worth paying a little extra for AMD builds (opens in new tab).

For more information, check out our guide to the best gaming DDR4 RAM (opens in new tab). 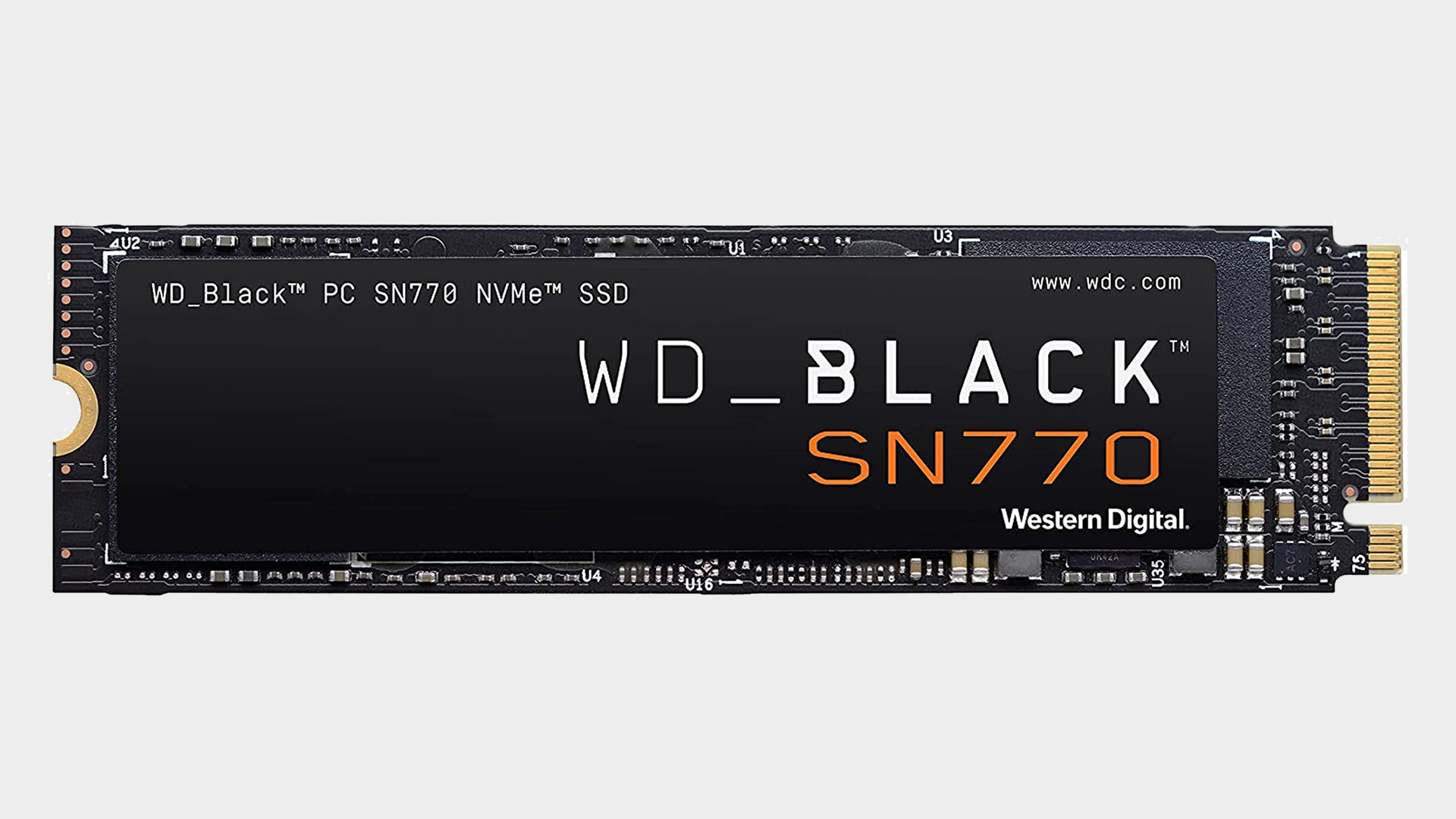 Deent capacity and low cost makes the SN770 a winner

Gen4 without breaking the bank

500GB is a viable option to save cash

Steam Deck: Release date and everything we know about Valve’s handheld gaming PC

You could spend more on a high-performance PCIe 4.0 SSD, but you can get awfully close to top performance with this SN770 from WD.

An NVMe M.2 SSD offers swift access to your data, and the SN770 delivers that snappy response at an exceptionally agreeable price. Fitted with 1TB worth of NAND flash, there’s enough space for your operating system, applications, and plenty of games. So feel free to go wild downloading your favourite games on Steam. Well, not too wild.

If you wanted to save some cash, you could opt for the smaller 512GB version here. It’s more agreeable on price, and your secondary storage could make up for lost capacity later down the line. 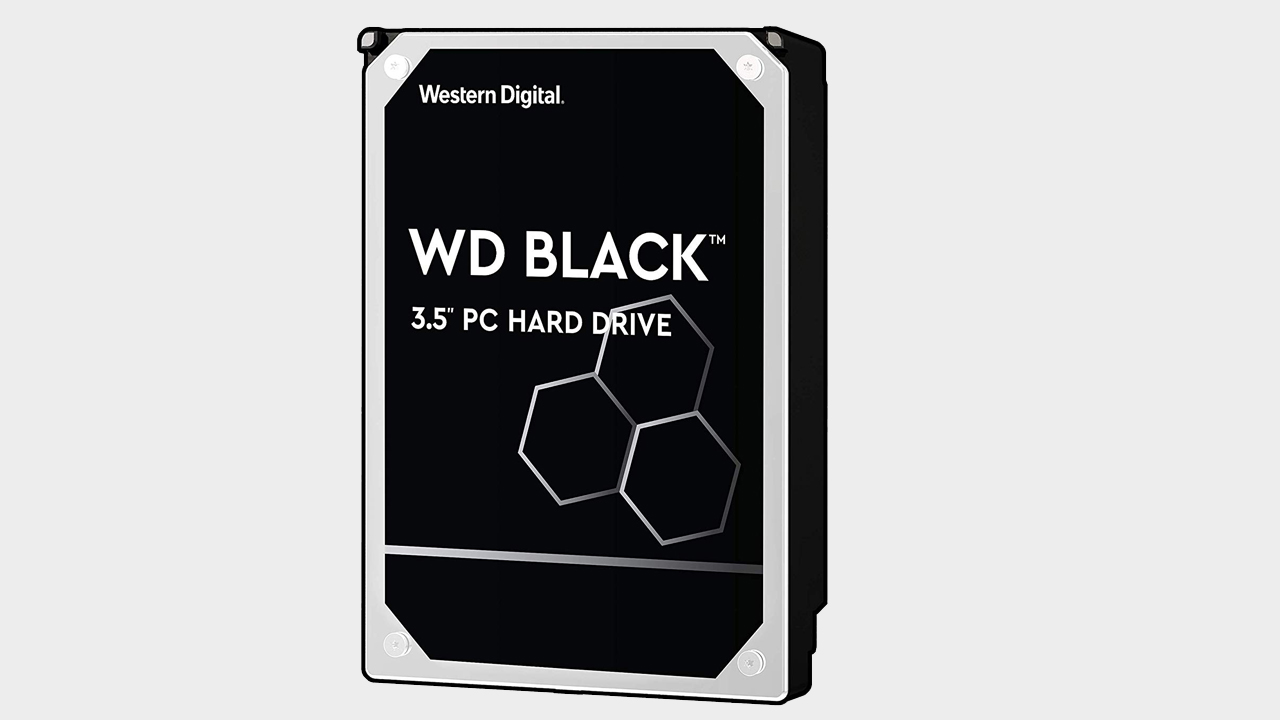 The quickest regular HDD, offering storage on a budget

Great reliability for a HDD

Given the install sizes of most modern PC games, it’s probably a good idea to get yourself a new drive for your gaming PC. While SATA SSDs are almost cheap enough to recommend as secondary storage (what a world we’re living in), you’ll probably look to a regular HDD to keep the cost down when you hit multiple terabyte demands.

We recommend the WD Black drive because it’s a 7,200 RPM drive with a respectable 32GB cache, which offers 1TB of storage for about $70 or less. While you could get a WD Blue or Seagate Barracuda for less, the WD Black offers speed and reliability over capacity. Realistically, you’ll appreciate that speed if you’re planning to keep your HDD inside a gaming PC for more than a couple of years, as we already see load times creep up for the biggest games of 2022. 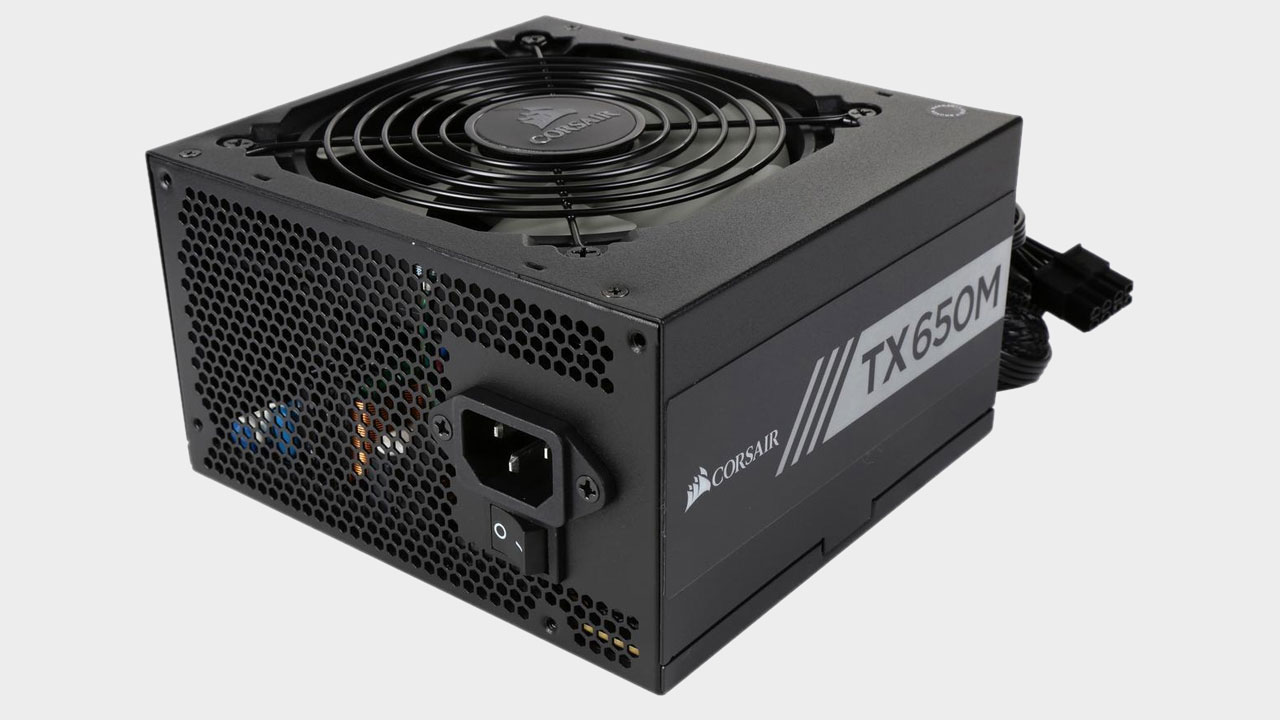 650W may not cover it for some super high-end GPUs down the line, but be realistic about whether that matters to you or not

Power supplies are not the most exciting part of a gaming PC build. After all, it can be hard to tell them apart in terms of features. Even so, you don’t want to skimp on your PSU. Corsair has an excellent and well-deserved reputation for its power supplies, and the TX650M comes at a reasonable price and delivers 80 Plus Gold efficiency.

Most power supplies from the bigger names are generally good, but we wouldn’t recommend that you put your money in anything with a warranty of fewer than five years or an efficiency rating below 80 Plus Gold (maybe Bronze in a pinch). The $10 or $20 saved often isn’t worth the risk (opens in new tab).

We also tend to go with modular PSUs where possible. It means less cable mess inside the case since you don’t have to stash unused cables somewhere. Instead, the remaining wires have to find a home in your closet.

Here’s our guide to the best power supplies for PC (opens in new tab) gaming. 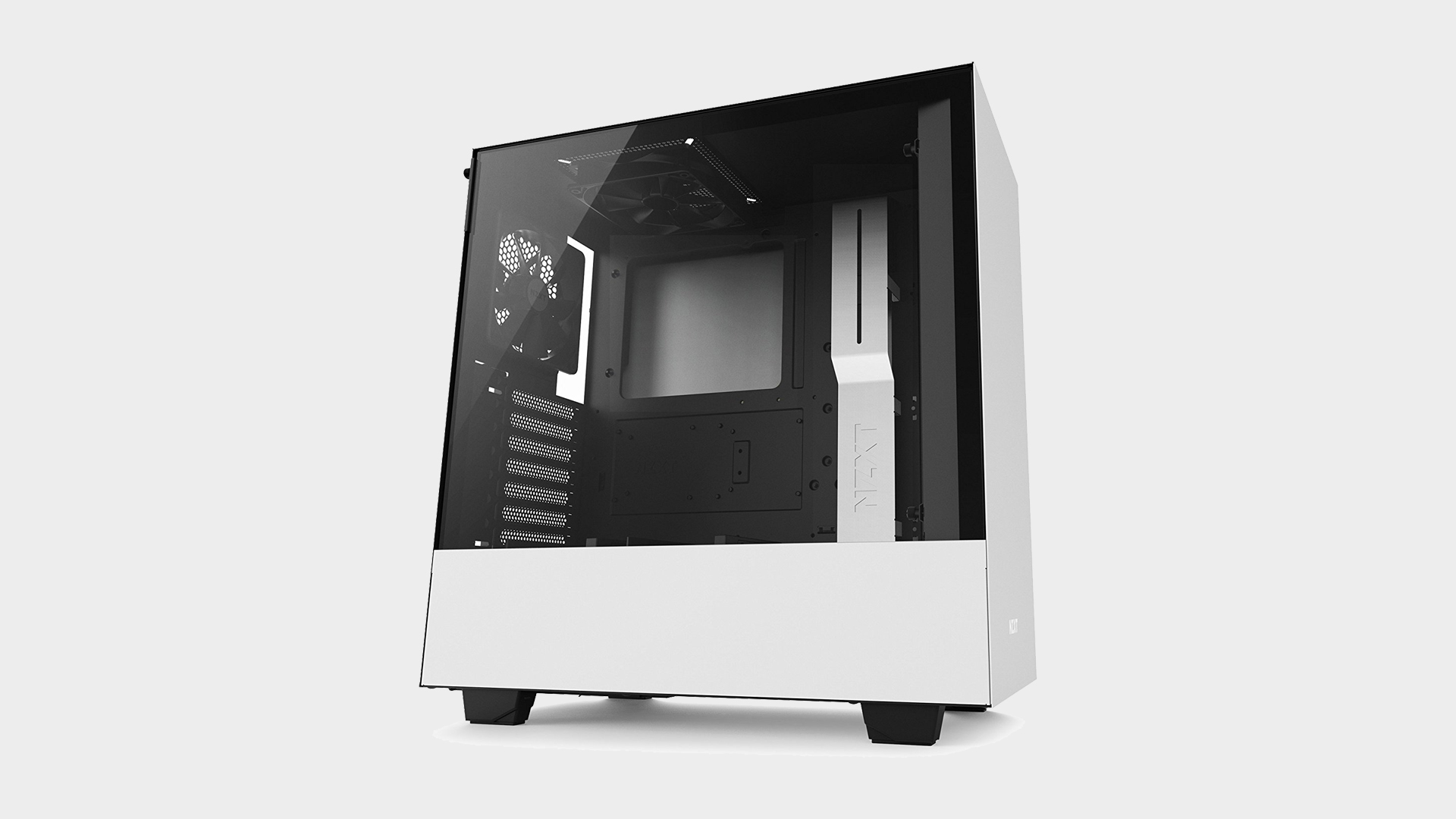 Cases can be as stylish or boring as you want. We’re going to go for the former rather than the latter, with the NZXT H510, a slick, tempered glass case available in white or black. The NZXT H510 is also reasonably priced, which is always a bonus.

If you want other options, check our guide to the best mid-tower cases (opens in new tab). The clean look goes well on any desk and doesn’t stand out like many so-called ‘gaming cases.’ There’s also the pricier H510i that integrates some smart features if you like the look of the H510 but want a few more bells and whistles.

Picking a case can be an entirely personal choice, so for more options, here are the best PC cases (opens in new tab) you can buy right now.